National Security Crisis: President Trump’s New Ponytail Is Stuck In The White House Fax Machine After He Tried To Fax An Image Of It To Xi Jinping To Make Him Jealous 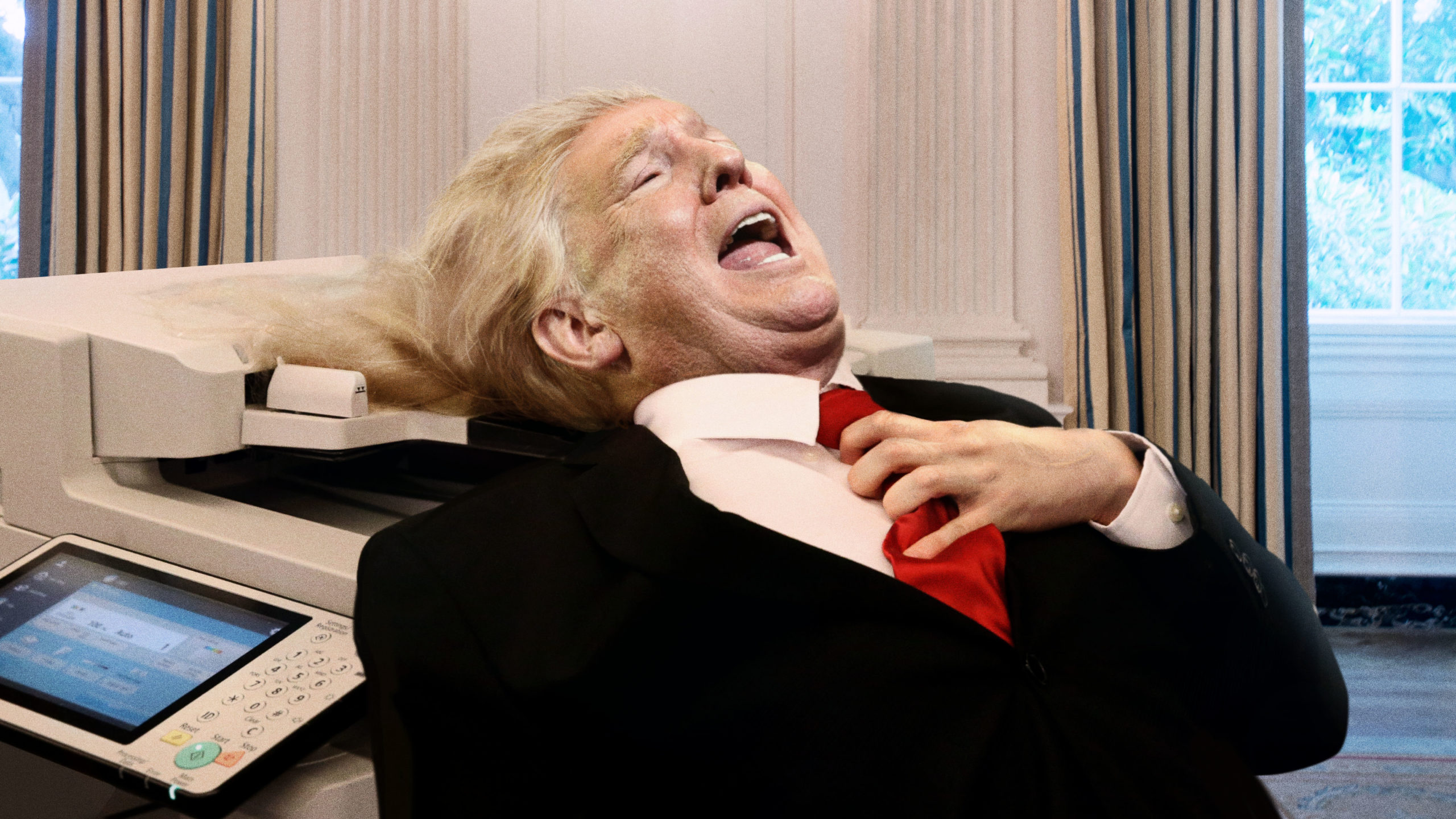 In recent months, the Trump administration has continued to apply pressure to the already contentious relationship between the U.S. and China, but the President’s latest maneuver may have just backfired in a major way: President Trump’s new ponytail is currently stuck in the White House fax machine after he tried to fax an image of it to Xi Jinping to make him jealous.

Wow. This is a troubling situation with serious implications for national security.

Earlier this week, President Trump debuted a dry, stringy new ponytail and immediately began using it to taunt his foreign adversaries, but with the ponytail now caught deep in a fax machine, it seems his hubris has only made things worse for him. According to sources, the ponytail crisis started unfolding early this morning, as Trump reportedly spent hours brushing his ponytail with a plastic fork from Panda Express while intermittently muttering, “I’m gonna show China that I’m the big man.” Several hours later, the president reportedly printed out an off-center photo of himself looking bashfully over his shoulder and scrawled a note on it for Chinese President Xi Jinping that read “Oopsy…Didn’t mean to send you this, but I guess now you’ve seen my cool ponytail. Bet you wish you had one…..” Then, while leaning forward in an attempt to send the missive to Xi Jinping through the fax machine, his ponytail flopped down into the receiving tray and immediately got sucked into the machine’s gears, causing the president to howl in pain and immediately void his bowels.

Secret Service agents then rushed over with scissors in hopes of cutting off the ponytail to prevent his scalp from getting ripped off, but the president barked at them to back off, screaming “Don’t touch my tail!” and demanding that they cut off his shirt, instead, under the belief that this would solve the problem. While Trump reportedly hoped that the ponytail would stoke jealousy among other world leaders and make Xi Jinping feel self-conscious about his own short haircut, it does not appear as if this strategy is panning out, as he even failed to enter the correct number into the fax machine, resulting in the fax being sent to Burger King instead of the Chinese president.

Sources say that the ponytail has only gotten sucked in further in the ensuing three hours since first getting snagged, and the president’s head has now been pulled almost entirely into the machine. But despite the increasingly dire circumstances, White House officials are downplaying the severity of the situation.

“The president fed his lush ponytail into the fax machine as part of a complex strategy he and his advisers devised to spur growth in the U.S. economy, and any implications that this was somehow unintentional or that the president has defecated on himself five different times out of terror are simply hateful lies spread by the fake news media,” announced Press Secretary Sarah Huckabee Sanders in a statement to reporters. “Rest assured that everything is under control, and unlike President Obama, who never once grew a beautiful ponytail to make America stronger, President Trump is using his long, majestic hair to do amazing things for this country and its people.”

Whether you accept this explanation or not, it is indisputably alarming that the leader of the free world’s hair is stuck dangerously deep inside the gears of a fax machine. As the situation continues to develop, the process of untangling him from the fax machine could easily become a defining moment for the Trump presidency—and the country at large.

Until Trump’s head is separated from the fax machine, we can unfortunately only guess at the lasting effects this crisis will have on U.S.-China relations. Hopefully things are resolved quickly so that Trump can show off his ponytail the way he originally intended and the entire country can move on from this harrowing ordeal.