Nerds No More: This Middle School Band Just All Put on Sunglasses Which Means They’re Gonna Play a Jazzy Song Next 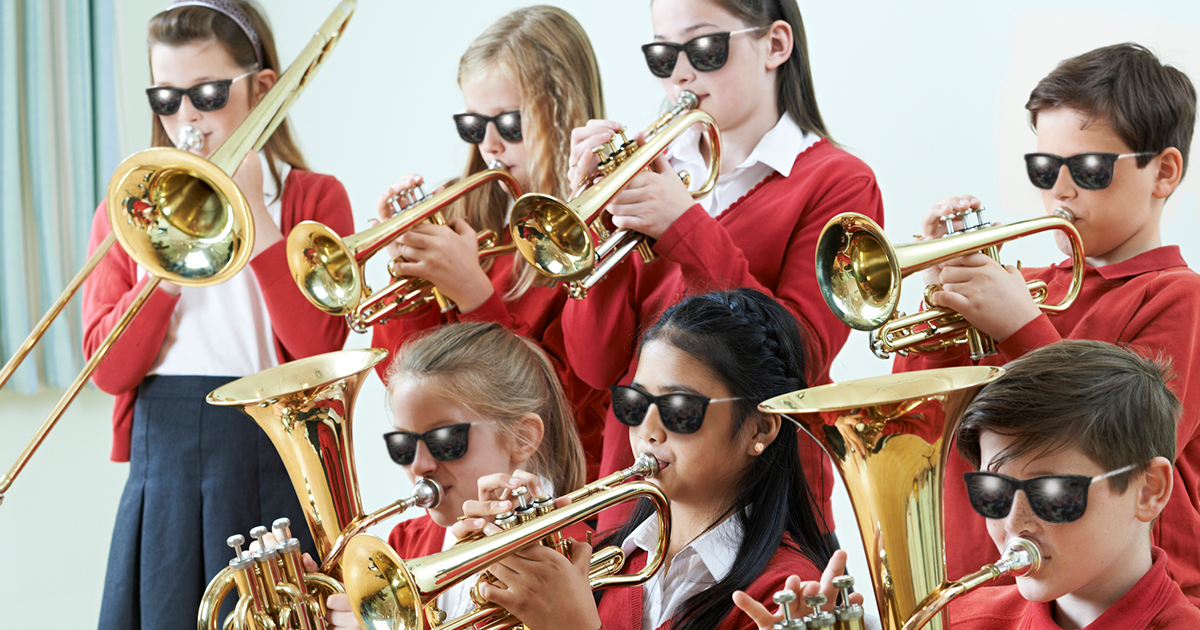 Big moves are happening at one school’s Spring music recital, and a major sartorial shakeup has us anticipating wonderful things to come: This middle school band just all put on sunglasses which means they’re gonna play a jazzy song next.

Whoa. They seemed like nerds at first, but boy were we wrong!

When these students first took the stage ten minutes ago, they were exactly the kind of reedy, fumbling dweebs you’d expect middle school band kids to be, but since finishing their performance of some dorky old Bach number, an incredible metamorphosis has taken place: After the audience’s polite applause died down, the kids all took out and put on pairs of matching sunglasses, instantly transforming them from boring nerds to into cool little Charles Minguses who are all but certain to blow us away with a fun, toe-tapping jazz hit. We’d pretty much resigned ourselves to a full set of stilted brass ensemble arrangements of worn-out classical music, but now that we see how suave these kids are in those sunglasses, we can safely look forward to a lively uptempo piece like “Sittin’ on the Dock of the Bay” or possibly even something contemporary like “Happy” by Pharrell.

It’s hard to overstate how palpably their newfound coolness has changed the entire atmosphere. Where mere minutes ago we were sitting in a stuffy middle school auditorium, we’ve now been whisked away to a smoke-swirled New York nightclub in the heady, experimental days of jazz greats like Bird and Thelonius Monk. A little bit of the kids’ coolness has clearly rubbed off on their band teacher too, because he just took off his suit jacket and performatively loosened his tie before shooting us all a knowing smile. Perhaps most promisingly, one especially cool trumpet player has come down to stand near the front of the stage and has donned a pork pie hat in addition to his sunglasses. Will he have a solo? Will he do a couple bars of honest-to-goodness improvisation? We can’t say for sure, but we’re confident that whatever he plays, it will be very cool—otherwise why would he be dressed that way?

Okay, it looks like the kids have finally all turned to the right sheet music and are about to start playing. Whatever jazzy little number they end up performing, we have a suspicion it’ll be pretty rad, as you wouldn’t don slick shades like those in an indoor setting unless you had a real banger up the sleeve.

We are grooving in our seats already!

God, these kids are so damn cool. If we had known that awesome stuff like this happens at middle school band concerts, we would’ve been going to them a long time ago. This is definitely not the nerd pageant we were anticipating. Rock on, little dudes! We are going to clap along so hard!