No Way He’s Bouncing Back From This One: A Shocking Tape Has Surfaced Where President Trump Appears To Be Bragging About Groping Women To Billy Bush 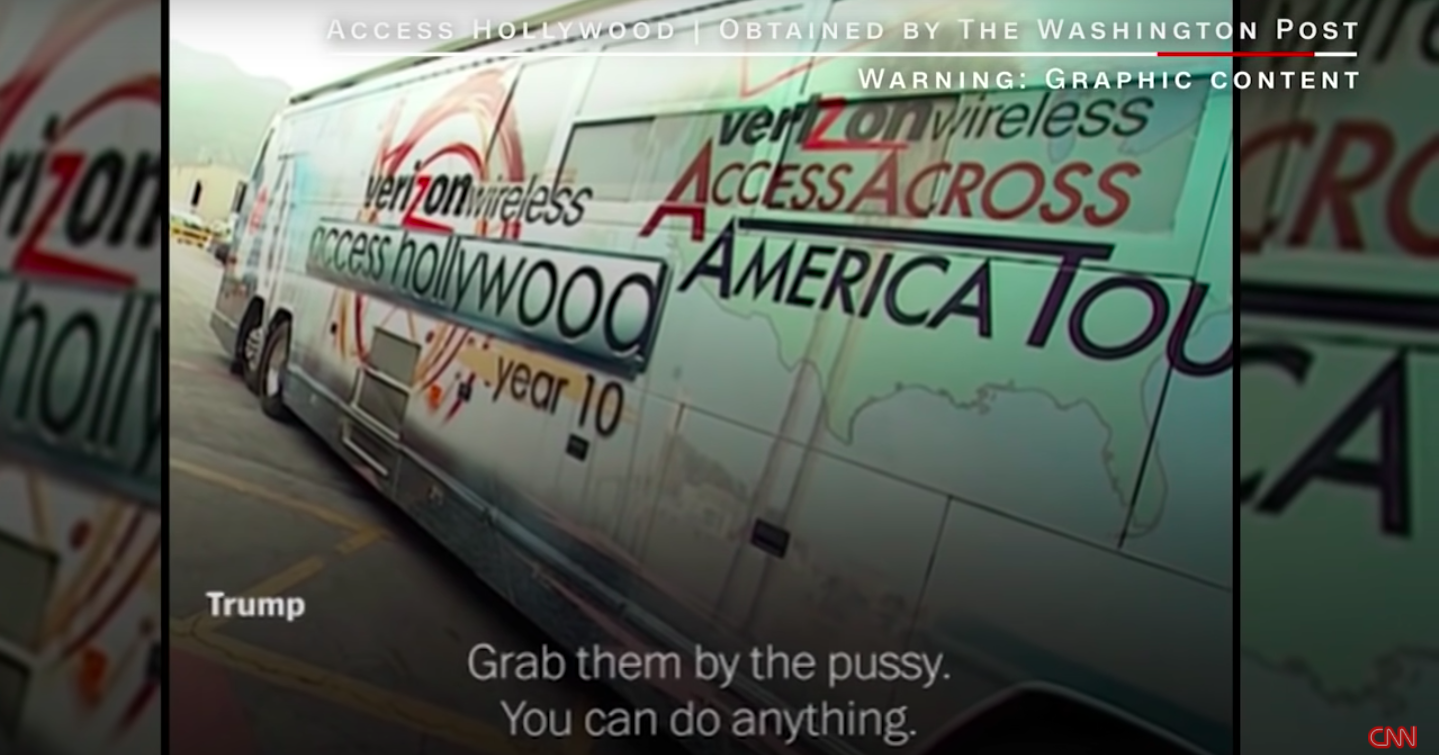 Over the past few years, President Donald Trump has been able to emerge unscathed from countless damning scandals that would’ve ended the careers of pretty much any other elected official. But now, with the election just days away, it looks like he’s finally been caught in an act so heinous and morally reprehensible that not even his most loyal supporters will be able to stomach it: A disturbing tape has surfaced of President Trump bragging about sexually assaulting women to Billy Bush.

Absolutely disgusting. There’s simply no way that Trump can bounce back from this one.

The shocking recording, which, according to the tipster who sent it to us, was taken in 2005 while Trump was mic’d up for a television appearance, captures the president lewdly detailing his attempt to seduce Access Hollywood host Nancy O’Dell to her co-host Billy Bush:

Yikes! That quote alone would likely be enough to sink his political career, yet, incredibly, Trump somehow manages to get even more crass as the conversation continues. While discussing actress Arianne Zucker, whom he and Bush were waiting to meet, Trump says one of the most disturbing things you’ll ever hear:

Yep, that’s right. This is a real quote from the current president of the United States of America where he is gleefully boasting about his strategy for using his fame to sexually overpower non-consenting women. It is beyond unconscionable, yet as appalling and shameful as it might be, some comfort can be taken in the fact that we live in a proud and principled democracy with plenty of checks and balances in place to make sure that vile, overt predators like President Trump are removed from power before they can do too much damage to our great nation. And considering the profound damage that America and its reputation would suffer under the continued leadership of an avowed sex offender, Republicans will unquestionably put country over party and coordinate with Democrats to evict Trump from the White House—if not out of good faith, then at the very least to preserve their own credibility as lawmakers.

Sadly, the quotes in this Access Hollywood tape shouldn’t be too surprising coming from a man who has been credibly accused of sexual misconduct by over 25 women since the 1970s, but it is nonetheless deeply disturbing to hear the leader of the free world speaking so openly about violating women. Though Trump once famously claimed that he “could stand in the middle of Fifth Avenue and shoot somebody” without facing consequences, he’s about to learn that he is not, in fact, invincible, as surely not even Trump’s most ardent fans can listen to this vulgar recording and still believe he is fit to lead our nation. After hearing this recording, the only people who would continue to support Donald Trump would be the most spineless sycophants and ass-kissers imaginable, but thankfully all self-respecting Americans have more dignity than that.

After all, no matter where you stand politically, there is no room for moral ambiguity when it comes to sexual assault, and we trust that there’s not a single Republican who won’t stand with Democrats in agreement that anyone who proudly admits to committing sexual violence against women should be disqualified from holding public office. Sure, they’ve been more than willing to stick with the president through some truly abhorrent behavior in the past, but at the end of the day, they’re human beings with wives and daughters and other important women in their lives, and to continue supporting Trump at this point would essentially be like telling those women, I do not respect you, and you exist only for the sexual gratification of men. There are a lot of sleazy lawmakers in Washington, but it’s comforting to know that there are none who would continue pledging their loyalty to someone who unabashedly and forcefully indulges his own sexual desires at the expense of his victims’ very personhoods.

What’s especially troubling about this Access Hollywood tape is that Trump freely admitted to his sex crimes while he knew he was being recorded—he wasn’t trying to hide it. If he’s willing to speak so cavalierly about something as monstrous as committing sexual assault, just imagine how horrible the stuff he’s actually hiding must be. It’s a good thing this tape leaked just in time for the election. Could you imagine having to spend four whole years under the authority of a man who openly delights in violating women and wields his extraordinary power to strip the humanity of others? America could never recover from such an embarrassment, but thankfully we’re a nation of principled citizens with deeply held values who would never tolerate, let alone empower, such a despicable leader.

Now that America has heard Trump brazenly boasting about committing sex crimes, there’s no way anyone can continue dismissing unflattering assessments of the man as “fake news”. He has declared in his own words that he is the most despicable type of predator that one can be, and anyone who thinks he should serve a second term at this point is obviously either insane or devoid of empathy to a psychopathic degree. Not that we’re saying such people actually exist—Americans aren’t that crazy—but with all the chaos and misinformation in politics these past four years, we figure we might as well state the obvious just in case.