Not So Impressive Anymore: Archeologists Have Discovered That The Sphinx Was Supposed To Be A Soccer Ball 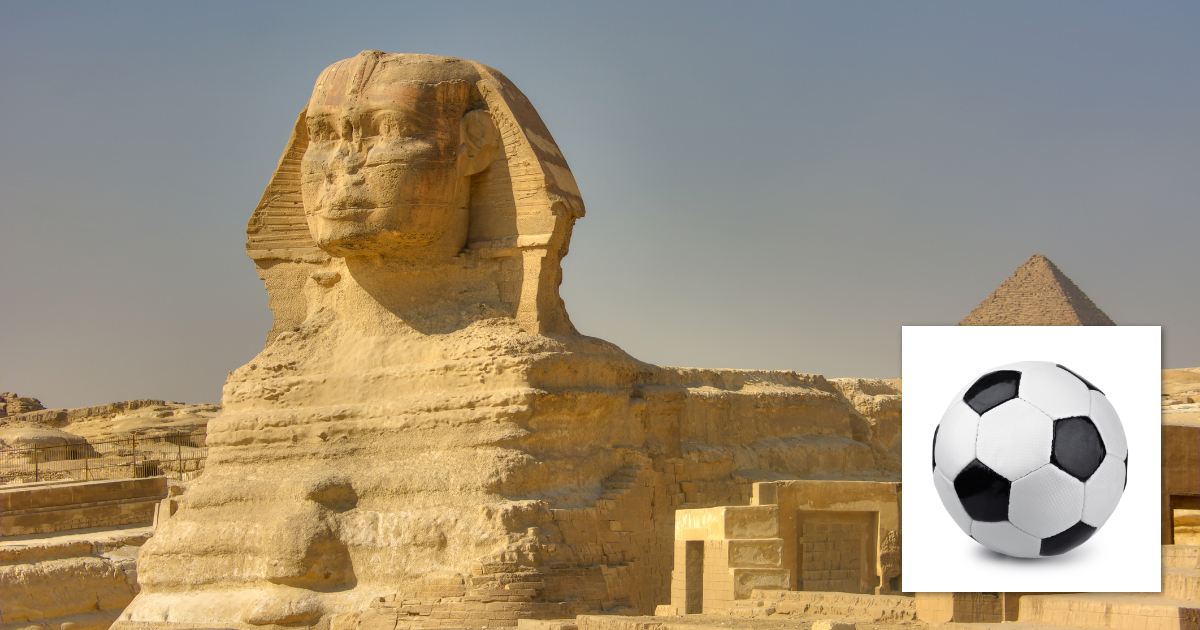 Prepare yourself for a letdown of historical proportions, because a new revelation has taken the shine off of one of the most well-known icons of antiquity: Archaeologists have discovered that the Sphinx was supposed to be a soccer ball.

Woof, really? No offense to the ancient Egyptians, but sounds like they were actually huge dumbasses.

The shocking failure came to light earlier this week when a dig at the Giza Plateau unearthed a number of carved tablets appearing to depict the attempted construction of a small, not particularly complicated soccer ball. Further digging, however, revealed more tablets recording numerous boneheaded mistakes and miscalculations during the building process, such as a typo changing the word for “rubber” to “stone,” causing the soccer ball to grow ever larger and more unwieldy to the Egyptians’ increasing exasperation. A final tablet bearing hieroglyphics roughly translating to “Cutting our losses; Guess we’ll just play soccer with this” shows an unmistakable representation of the towering Sphinx statue, conclusively proving that the Sphinx is not a staggering wonder of ancient architecture, but rather the laughably pathetic result of an abortive attempt to play sports.

Subsequent digging around the Sphinx statue itself has reinforced this new line of thought by revealing a pair of goalposts at the eastern and western ends of the Sphinx, which despite being regulation size are still several orders of magnitude too small for any parts of the Sphinx to conceivably fit through. The archaeologists have also excavated several mass burial sites nearby containing thousands of skeletons with smashed skulls and leg bones, suggesting that the deaths of laborers during construction of the Sphinx paled in comparison to the deaths of those who tried to play soccer with it afterwards. It would be one thing to die in the construction of a monument meant to be so magnificent as to defy death itself, but dying because you screwed up making a soccer ball has got to be one of the more undignified ways to go.

“We had always assumed it was supposed to be a temple or a funerary monument of some kind, but apparently that was way too charitable because the whole thing was only ever supposed to be a small, bouncy ball for people to kick around,” said Dr. Simone Hasselbeck, the lead archeologist behind this game-changing discovery. “Now that we know its intended function, we can see that the damage to the Sphinx’s face we had previously attributed to weathering and vandalism was more likely the result of these morons trying to do bicycle kicks in a futile effort to score a goal with this thing. I don’t know the first thing about how to make a soccer ball but I could definitely get closer than these idiots did, and I wouldn’t even have to spend a whole damn century of forced labor to do it.”

Yeesh. This is a pretty devastating L for the ancient Egyptians.

In retrospect, it’s embarrassing that we used to be genuinely awestruck by this big, stupid lion-shaped rock. Even if that’s what they were intending to build, it’d still be a useless, ill-conceived structure, and it makes sense that no other cultures have felt the need to build stadium-sized rock monsters of their own. If there’s any takeaway here, it’s that the ancient Egyptians may very well have been the dumbest humans to ever walk the earth.