One Day I Will Understand Basketball (By Jack Nicholson) 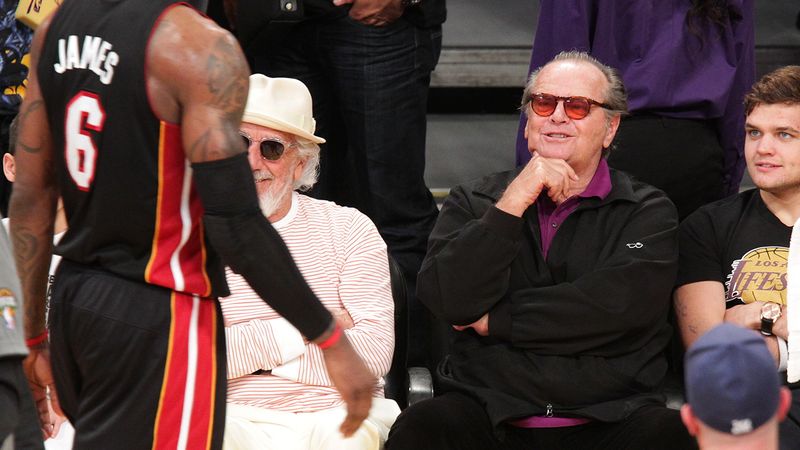 For more than two decades, I’ve been courtside at nearly every Los Angeles Lakers home game. I go to so many games that some have said my obsession with basketball borders on unhealthy. Maybe they’re right, but I couldn’t care less. So help me god, I will keep watching every basketball game I can until I finally understand what the hell is going on.

It is my eternal enigma. What I wouldn’t give to understand what basketball is.

When I first saw a group of very tall men rushing and twirling around, I could not have foreseen what an object of fascination it would become for me. Years later, this inscrutable activity never ceases to enthrall and mystify me. The basics of the game have been easy enough to intuit: Some of the tall men want this ball until it goes into the ring, but after it goes into the ring, the other men give it to them freely, perhaps as a token of peace or trust. It’s an absolutely fascinating ritual, even with my very limited understanding of what is happening.

On movie sets, I can barely concentrate on my acting, as my mind continually drifts back to basketball. The sheer mystery of it. Although I’ve now spent countless days mere feet away from the strange dance of squeaking rubber and tall, serious men, still it confounds me. I have filled countless notepads with furious notes, sketches, and equations as I’ve tried to solve the geometric riddles with which basketball taunts me. Arcs and loops. Rectangles within glass rectangles. Some sort of impossible purple and yellow code.

What does it all mean?

Often I cannot sleep at night, my mind racing with questions: What drives these men to commit basketball in public like this?

I’ve had a few major breakthroughs in my understanding of the activity: Most of the shots are worth two points (which I believe to be a very fair amount of points, based on everything I know about the game). The shots taken while the men are relaxing are only worth one point, because they are easier. I believe these are called “relaxation shots.” The shots taken from very far away are worth three, and those are called “far throws.”

My biggest breakthrough in my understanding of basketball came when I first noticed the ball. It was Bucks-Lakers on March 27, 1994, just after I’d finished shooting Wolf. It was the 14th time I’d watched these two teams, but the first time I saw that they had a ball. When I noticed the ball, it was like a 10,000-watt lightbulb turned on inside my head. Of course, I have since studied the ball and know all about it: It is always the exact same size, it is likely filled with air or possibly water, its color is orange, and as far as I can tell, it is round.

I often shout these questions and suggestions to the basket men, but it is as if they do not know I am there. Occasionally I try to walk onto the court and join in the game, but I am not allowed to. Why? Is it my age? Am I not tall enough? Is it because my costume doesn’t match the other costumes? It seems that doing basketball myself would be a great way for me to learn it, but they tell me, “Jack, please take a seat.”

One day I will figure out how to join their ranks, but for now, it appears I will have to learn this through observation alone.

I must admit, I’m no spring chicken. I have but a few years left on this Earth. I’ve had great success in my career, won three Oscars—I’ve done it all. So for me, understanding basketball is the final frontier. It’s all there is left. The clock is ticking, but my time will come. I will understand it. I must.