Paying For His Crimes: As Part Of His Plea Bargain, Michael Flynn Is Visiting High Schools To Speak To Kids About Why They Shouldn’t Lie To The FBI About Contacts With Russian Diplomats 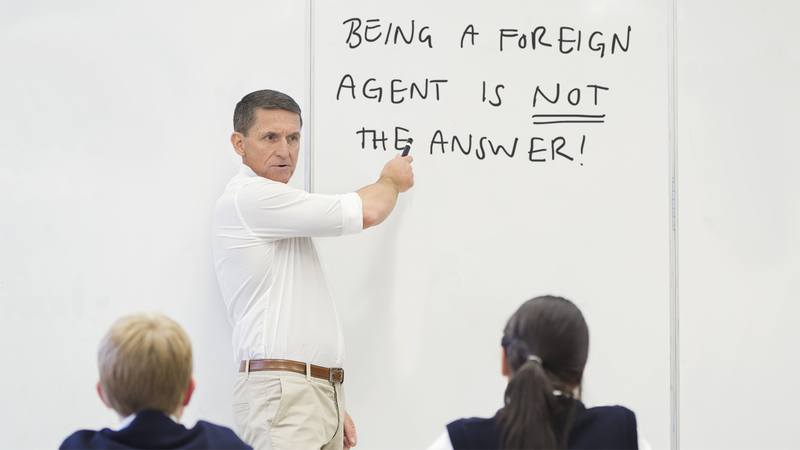 It isn’t easy to atone for committing a felony, but Michael Flynn is hard at work trying to pay back his debt to society. Under his plea bargain with FBI director Robert Mueller, Flynn is required to visit high schools and tell students that they shouldn’t lie to the FBI about their contacts with Russian diplomats.

Amazing, this could really help lead kids down a better path than colluding with Russia and lying about it to federal agents.

In exchange for a reduced jail sentence, Flynn was required to work with the FBI to craft a fun yet informative presentation designed to drive home to an audience of teenagers the dangers of misleading the bureau about any contacts they may have had with high-ranking Russian ambassadors or heads of state. For the past few weeks Flynn has been delivering the hour-long presentation, followed by a Q&A, to dozens of high schools across the United States.

According to students and teachers who have been present for Flynn’s legally mandated lectures, the former national security advisor to President Trump begins by walking out in front of the student body in a military uniform and says, “Hello, I’m Michael Flynn, and I’m here to talk about why it’s cool to be honest with the FBI.”

Flynn then takes off his military uniform to reveal an orange prison jumpsuit he’s been wearing underneath it. When the gasps from the shocked high school students have died down, Flynn says, “I used to think it was rad to illegally discuss sanctions with Russian ambassadors like Sergey Kislyak and then try to hide those conversations from U.S. investigators, but I paid the price for that mistake, big time, and so could you.”

This is definitely a major fall from grace for a man like Flynn, who was once a celebrated general and high-ranking government official who has now been reduced to speaking in front of audiences of bored teenagers about how if they decide to violate the Logan Act by conspiring with a foreign government and then lie about it to detectives who wiretapped their conversations, they can forget about summer vacation or going to college, because they’ll be throwing their entire futures away. Still, it’s good to see that Flynn is willing to accept the consequences of his criminal actions and fulfill his court order to talk with impressionable teens about how there’s nothing “badass” about lying to the FBI about an illicit phone call to the Russian embassy.

Flynn’s plea deal requires him to continue his speaking tour across the country teaching high school students everywhere about the dangers of joining the highest levels of the U.S. executive branch, using your position to conduct secret negotiations on behalf of the Russian government, and then lying about it when questioned by the FBI. It’s a stupid move that can mess up your life, but hopefully Flynn can convince these innocent youths to avoid following in his footsteps.