PC Culture Run Amok: This Fat White Boy Was Expelled Just For Getting Fully Nude On The School Bus To Change Into His Dashiki 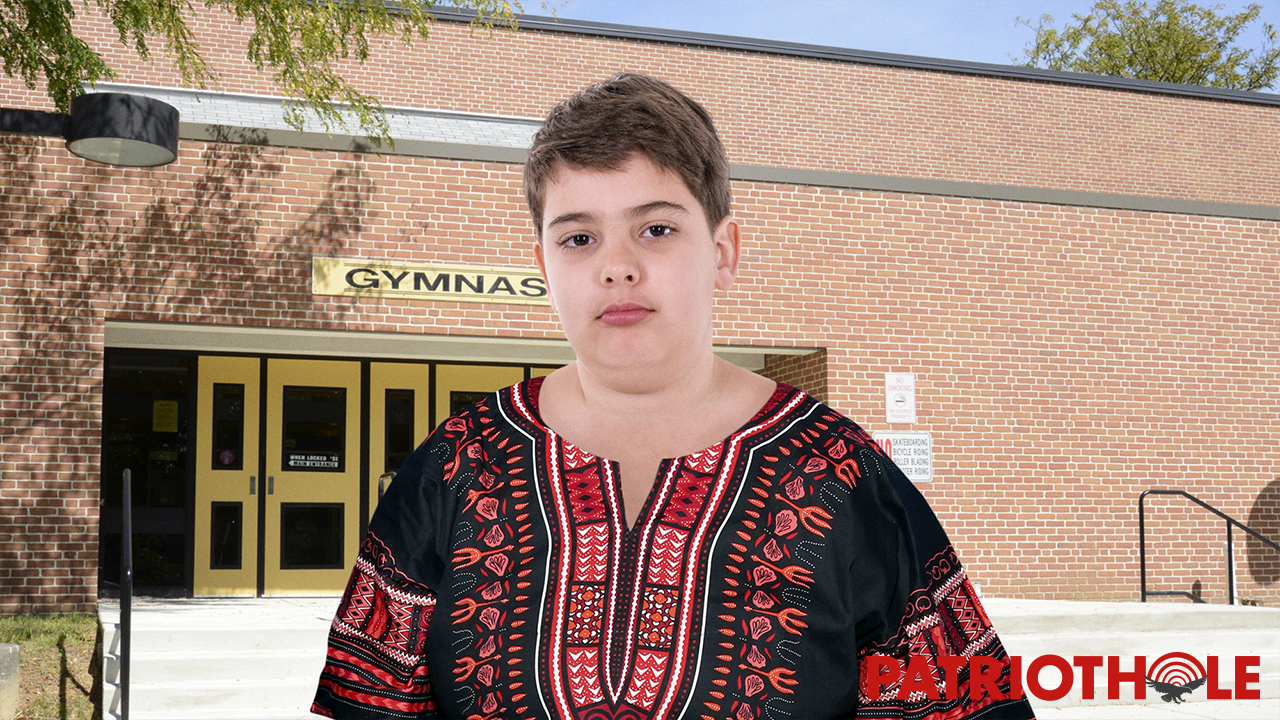 Every single day, the SJW cuck armada tries to enforce a new rule about what Americans “can” or “can’t” do in this country. But this week, the P.C.-police stooped to a new low entirely and proved once and for all that political correctness is the biggest threat to our God-given rights as patriot-blooded Americans: This fat white boy was expelled just for getting fully nude on the school bus to change into his dashiki!

Oh, so it’s “problematic” for an overweight white boy to get totally naked on the bus to put on a dashiki? Truly, lib-logic is the result of serious mental illness!

Yesterday morning, Rubin O’Leary, a fat white boy at Lenape Middle School in Doylestown, PA was minding his own business in the seat closest to the school bus driver when he stripped completely nude to put on a dashiki that perfectly covered the upper half of his body. Though Rubin did not hurt ANYBODY, he was met with outrage from the soy-infected bus driver, who apparently thought it was so “offensive” for fat white boys to get naked on the bus to change into African garments that he threatened to report Rubin if he didn’t put his clothes back on. Once Rubin got off the bus, still in nothing but his dashiki, a school security guard blocked him from heading to class and instead took Rubin to the principal’s office, where he was told he was not allowed to come to school anymore.

Hmm. It seems pretty obvious to any true PATRIOT that if Rubin had been an African-American boy who wore a dashiki and never exposed himself in front of his classmates, he would still be in school. But just because you’re fat, white, and stripping completely naked to wear a dashiki, you get punished for it today. That’s how INSANE PC culture in this country has become!

“When I heard the reason why my fat white son had been expelled and that I had to find a new school for him to attend, I was consumed by rage,” said Chuck O’Leary, Rubin’s father and a gun owner. “It’s just so sad to know that our children are growing up in a time where you can’t be a fat white boy in America who gets naked on a moving public school bus to change into a dashiki. Since when did the PC police get to say that was an unacceptable thing to do in our country?”

Teachers like the ones who punished Rubin are brainwashing our children with beta-ideologies each day, and it should fill all patriots with uncontrollable anger!

With this disgusting incident, political correctness has officially been taken too far in America. For all the libs who’ve never read the Constitution, here are a few basic facts about America for you: Fat white boys CAN get naked in front of other people to wear traditional West African clothes, Democrats have NO PLACE in schools, and PC culture DOES NOT BELONG in America!

PatriotHole stands proudly with this fat white boy because he did NOTHING wrong!!!

UPDATE: Incredible news, patriots!!! President Trump has once again saved the day by inviting the fat white boy to the White House!