Playing Hardball: Donald Trump Is Having His Sons Pose Shirtless On A Barge To Lure The Women’s March Into The Potomac 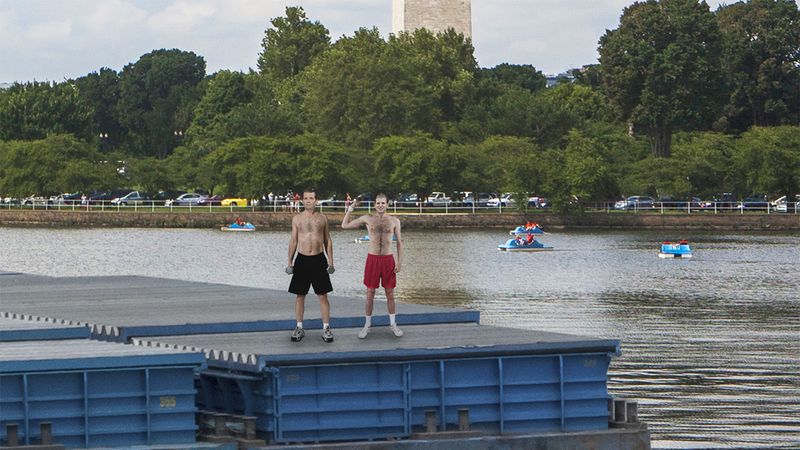 Donald Trump is no stranger to controversy. But with turnout for the Women’s March protesting his inauguration threatening to overshadow the inauguration itself, it looks like he’s decided to play some hardball and strike back: He’s having his adult sons pose shirtless on a barge to lure the Women’s March straight into the Potomac River.

There is no question about it: Donald is not pulling any punches here.

If there’s one thing Trump knows, it’s optics, and tens of thousands of women descending on Washington to protest the wave of misogyny and sexism that swept him into office is not a great look. That’s why he’s having Eric and Donald Jr. row out early Saturday morning to a barge anchored in the middle of the Potomac, strip off their shirts, and show off their physiques to the marchers. Trump is confident that sight of his middle-aged sons flexing and striking wrestler poses will spread quickly among the protesting women, who will flock into the river, their arms outstretched in blinding desire for Donald Jr. and Eric, only to be swept away by its swift current, nipping the march in the bud.

Before sending his sons off with a pair of Trump-branded ties to drape over their bare chests, the president-elect was heard telling them in a low, conspiratorial tone, “If those girls want a taste of a real man—and they will—they’ll have to swim for it.” Trump was also seen demonstrating some of the poses, as well as squeezing his sons’ biceps and slapping Eric in the belly to make sure he’d been keeping up his crunches.

Wow. Even with the inauguration on his mind, Trump is still making the time to plan this face-saving action to a T.

Donald Jr. and Eric know that a huge influx of women in D.C. rallying against the open sexism that their father stands for would be a black eye, so they are doing everything they can to entice those women off the streets and into the Potomac. This morning, they quickly retreated to a vacant Trump Tower function room where they’ve been giving each other flexing tips to emphasize their physiques, as well as practicing wrestling holds and rudimentary stage-combat moves to show off their skills. They’ve even been developing personas to captivate the protesting women on shore, with Eric leaning toward a corn-fed all-American heartthrob and Donald Jr. adopting the devil-may-care attitude of a troubled bad boy. Passing staffers have heard them practicing deep voices to shout seductive catchphrases in, including “Come get a slice!” and “Sorry, ladies, the belt stays on!”

It’s also clear that Trump’s leaving nothing to chance. He’s had his staff fully equip the barge with everything his sons might need to bolster their sensual allure: 25-pound weights for the younger Trumps to heft and pump, bottles of club soda for them to spray each other with, baskets of strawberries for them to feed each other, and a Marshall stack blasting a shuffled playlist of red-blooded hits like “You Shook Me All Night Long,” “Mustang Sally,” and an original song the two brothers penned together titled “Urging O’Clock.” And if the march is taking too long to redirect toward the river, Trump plans to repurpose the jumbotrons from the inauguration to show a live feed of his sons getting wild on the barge, along with an inset map of their location.

With protestors already flooding into Washington, the stakes couldn’t be higher for Trump. If his sons pull this off, he’ll have silenced a whole lot of critics without lifting a finger. And whether you support him or not, you’ve got to admit: American political theater has never been this exciting!