Policy Guy: Paul Ryan Just Put Out A Comprehensive 14-Point Plan To Fully Debase Himself For The Trump Administration 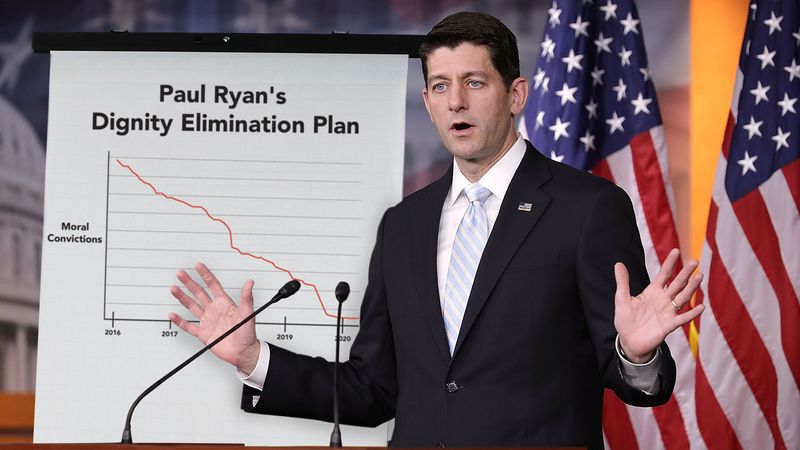 Ever since he arrived in Washington, Paul Ryan has made it clear that he prefers to get into the nuts and bolts of policy rather than getting a sound bite on cable news, and this morning he reaffirmed that worldview. Clearing up a cloud of speculation over the future path of the GOP, Speaker of the House Paul Ryan released a proposal outlining his plan to utterly debase himself before Donald Trump.

In a sprawling 72-page document entitled “The Paul Ryan Dignity Elimination Plan,” the self-avowed policy wonk presented what he called a “detailed road map” to turn himself into “a sock puppet with Donald Trump’s hand up my ass.”

“The American people deserve to know how I will become a pathetic, subservient shell of a man, and this is a comprehensive way to get me there,” the House speaker said in a press conference this morning, complete with a bevy of graphs and data pinpointing exactly how he will supplicate himself entirely. “I’m the kind of guy who loves to crunch the numbers and work out every detail of how I will relinquish the last shreds of my self-respect to President Trump. That’s just me.”

Paul Ryan went on to highlight how his meticulously planned-out initiative makes good on his campaign promise to betray everything he holds dear in support of Donald Trump.

“It’s not just about immersing myself in the policy, it’s about enacting it, too,” Speaker Ryan continued. “Just this weekend, I supported President Trump’s Muslim immigrant ban, despite condemning the idea back in August. It’s that kind of whiplash-inducing contradiction in blind service to the president that I pledge to continue until I am the human equivalent of a plane crash.”

Citing how not everyone is “a total policy hound” like him, Ryan’s staff released this summary distilling the plan down to 14 key points:

Paul Ryan noted that his plan to publicly emasculate himself enjoys widespread support among fellow Republicans, and even a handful of Democrats have approached him asking to borrow language for similar plans of their own. He also warned of the consequences if he doesn’t become a wretched toady, cautioning that “future generations of Americans may never use the name ‘Paul Ryan’ as a synonym for ‘bitch.’”

Whether you’re a Republican or a Democrat, you’ve got to give Ryan credit for laying out a plan this well-thought-out. It’s becoming increasingly clear that if anyone is going to turn Paul Ryan into Trump’s quivering little slave boy, Paul Ryan is the right guy to do it.