Powerful Act Of Mercy: When This Pediatrician Looked Into A Child’s Ear And Found A Tiny Family Of Polite, Well-Dressed Ants Begging Him Not To Tell Anyone, He Looked The Other Way 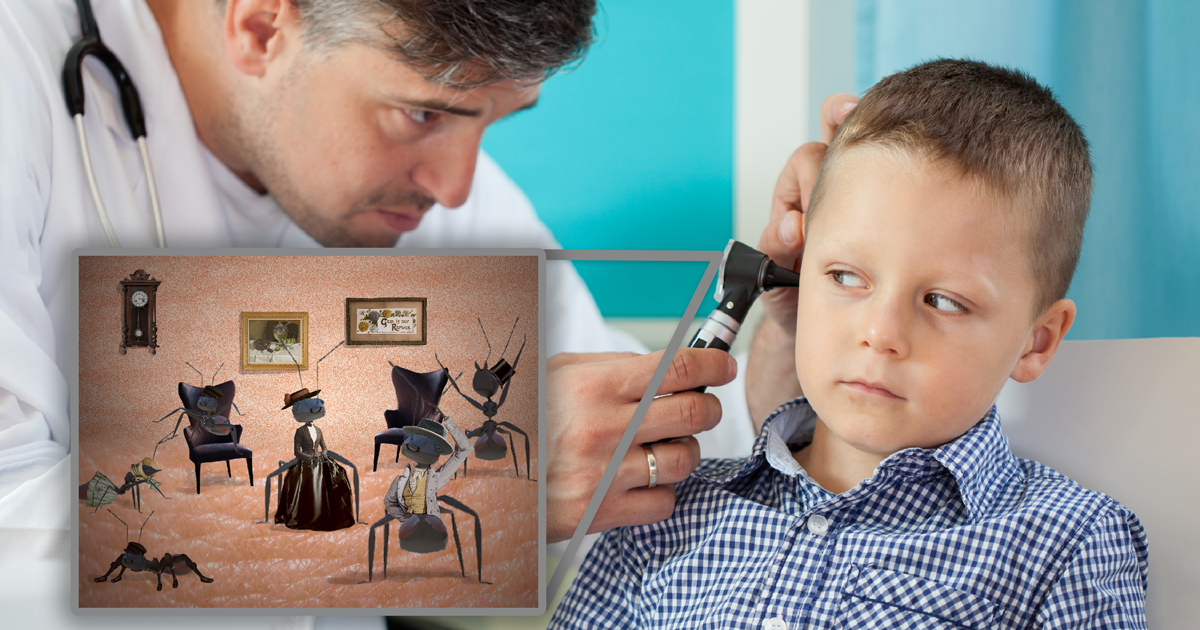 Grab the tissues, because here’s a heartwarming story about the power of mercy and the incredible impact it can make on the lives of others: When this pediatrician looked into a child’s ear and found a tiny family of polite, well-dressed ants begging him not to tell anyone that they were there, he looked the other way.

Beautiful. We really need more of this in the world!

Earlier today, Dr. Anthony Tabachnik was conducting a routine physical on six-year-old Liam Russo when he noticed something unusual inside the boy’s ear: a small family of black garden ants, all dressed to the nines in 19th century-era suits and dresses, scurrying about the eardrum with great industriousness. Upon realizing they’d been discovered, the ant children gasped and alerted the ant father, whose eyes went wide with panic as he quietly urged his wife and children to remain calm. Then, after several moments of anxious deliberation amongst themselves, the ant family courteously bowed and curtsied to Dr. Tabachnik, after which the monocled patriarch stepped forward, tipped his microscopic top hat, and introduced himself.

“G-g-greetings, kind sir!,” stammered the visibly nervous father ant to the doctor. “We are pleased to make your acquaintance. As you can see, my family and I have sought refuge in this young man’s ear, as our anthill was recently destroyed by an errant soccer ball. I understand that our presence may come as a surprise to you, just as it would if I were to discover a family of critters living on my own antenna! But do not be alarmed, for I assure you, we intend no harm to this boy and will only be taking shelter here until we can find a proper home in the dirt. Children, come, come! Introduce yourself to our lovely guest!”

In lock step, the ant children shyly stepped forward and introduced themselves one by one: “Patrice!” “Boadicea!” “Cordelia” “Percy!” “Baby Rhys!” Then they politely dismissed themselves to attend to their daily chores, tidying up the eardrum with tiny mops, dusters, and rags while singing a song called “Scrubbin’ Ears Is The Life For Me” in delightful four-part harmony. Though Dr. Tabachnik’s medical training would normally lead him to remove and/or exterminate an insect population living inside a child’s ear, he elected to continue hearing the ants out, finding their affable demeanor to be endearing and not at all threatening.

“They’re good kids, aren’t they?” said the ant father to the doctor, clacking his mandibles with pride. “They’re my entire world. I don’t know if you’re a father yourself, but if so, surely you can understand the pride one feels for his young, as well the desire to keep them from harm. Thus, I must ask from the bottom of my heart that you refrain from squashing them and that you do not announce our presence to Master Liam, whose ear canal we have so happily settled in. We may be small, but our capacity for love is just as big as yours, which is why I must beg you to please show my humble little brood some grace.”

The ant mother then lovingly took her husband’s hand and echoed his pleas, assuring the pediatrician that they were peaceful, God-fearing ants who don’t mean anyone harm and that they’d be forever indebted to him if he let them be. She then unraveled the blade of grass she’d wrapped around her thorax like a swaddle to reveal a teeny tiny larva gently throbbing in her arms, saying, “At the very least, I beg you, spare our young. They are innocent.” She then tenderly wrapped the larva back into her swaddle before suddenly regurgitating a pile of partially digested matter onto the ground for the other children to eat—a gross yet profoundly touching moment.

Dr. Tabachnik paused momentarily and considered the insect family, which surprisingly reminded him of his own family in many ways. Then, seemingly remembering his oath, he muttered “Do no harm” under his breath and removed the otoscope from Liam’s ear, announcing “Everything looks normal here!” before continuing on with the rest of the check-up without ever once mentioning the ant family.

Wow, we are seriously choking up right now. Faith in humanity restored!

Let this be a reminder that, at the end of the day, we’re all more alike than different, and we should always strive to treat each other just like we’d want to be treated. Without a doubt, the ants in Liam’s ear will remember the pediatrician’s extraordinary act of mercy for the rest of their lives. Dr. Tabachnik, you are an absolute hero. Thank you for showing these ants such grace!