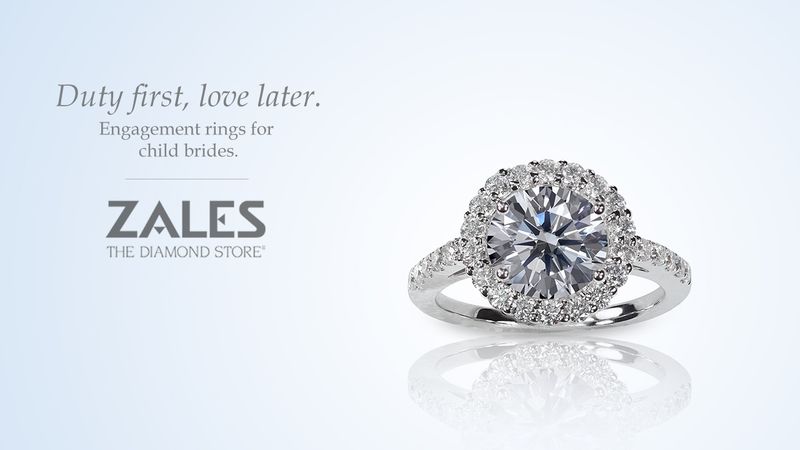 Your average company is no stranger to controversy these days, but every once in a while you hear about a corporate blunder so astoundingly egregious that you just want to shout, “What the hell were they thinking?!?” The latest such offender is the jewelry retailer Zales, which was forced to apologize this week after debuting a line of extra-small rings for child brides.

Seriously, though: What the hell were they thinking?!?

The tiny rings, sold as part of the Daughters of Duty collection, came packaged in pink teddy-bear-shaped ring boxes and bore encouraging inscriptions on the 14-karat white-gold bands such as, “Love will come,” “The fairy tale begins,” and “Obey him.” Advertisements for the rings featured the tagline, “He chose you because you’re special” and boasted quality ring options for every budget, “no matter how modest or extravagant the bride-price.” Predictably, the ads were met with immediate public backlash from consumers and human rights groups, who argued that forced marital unions between children and adults are morally reprehensible and should not be glamorized with jewelry or any other consumer goods.

“We apologize to anyone who was offended by our Daughters of Duty collection, which we see now was in poor taste,” said an official Zales press release. “Our sole intention was to honor the rich cultural tradition of child marriage and provide quality, affordable jewelry options for an underserved demographic, but in doing so we inadvertently promoted an oppressive social custom that has no place in a civilized world. Moving forward, we will only sell wedding rings for legal adults in mutually sanctioned relationships.”

While Zales was swift and sincere with the damage control, chances are it’ll take a while for them to bounce back from this one. Let this serve as a cautionary tale to other brands: If your product provides commercial legitimacy to the forced sexual bondage of unconsenting children, you might want to sleep on it first before going to market.