Practicing Self-Care: Thousands Of Americans Are Showing Up To Stare At A Fat Baby Stuck In A Doggy Door To Distract Themselves From Their Trump-Related Anxiety 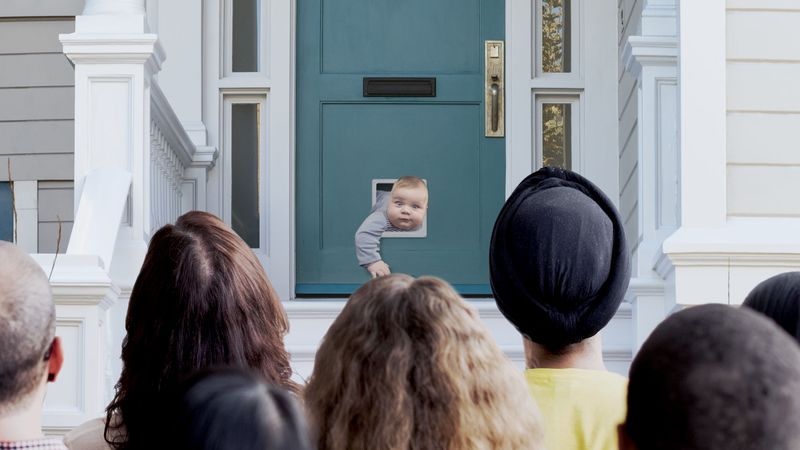 In the days since January 20, the endless onslaught of executive orders and belligerent rhetoric coming out of the Oval Office has left millions of U.S. citizens feeling constantly overwhelmed with anxiety and fear. Thankfully, more and more people have been figuring out how to cope with life under Trump by practicing self-care, with one method proving to be particularly effective: Every day, thousands of Americans have been showing up to stare at an incredibly fat baby stuck in a doggy door.

The huge baby, who’s been wedged in the doggy door of a Danvers, MA home since some time last week, has been providing countless people with relief from the emotional fatigue of our nation’s new political reality. Whether just stopping by to gawk for a few minutes before work or sticking around for hours to contemplate its many rolls, the ensnared baby has been a reliably calming force for many people who have otherwise been feeling angry and powerless.

“I like how squishy it looks,” says 28-year-old Madeline Lyons, who’s made sure to carve time out of her busy schedule to stare at the stuck baby. “When I’m staring at it, I can forget about how Steve Bannon is pursuing a white-nationalist agenda and just recharge my batteries a little. I don’t know how it got stuck, but I’m glad it did.”

While the baby attracts a steady flow of visitors from dusk till dawn, crowd sizes can swell to the tens of thousands in the wake of a new executive order or a particularly alarming news story. Certain events surrounding the baby itself can also cause visitor numbers to spike, such as on Sunday, when the baby got ahold of a dustpan somehow and was swinging it around, or on Tuesday, when it kept shouting the word “Altoid.”

Most people, however, say they are visiting the baby simply because they are burned out from the endless cycle of political crises and injustices, and seeing the baby slapping its doughy hands on the porch until it gets tuckered out rejuvenates them enough to once again face a world where the White House wants to ban Muslims from entering the country. By unplugging from social media for a little while to go watch the baby gleefully coo at a squirrel running across the yard, people are able to let go of their stress long enough to refocus their energy and get back out to protest.

For anyone waking up in the middle of the night from a stress dream about how President Trump is actively vilifying the free press, this plump baby stuck in a doggy door like a cork in a bottle could be the perfect counterbalance. A few hours ago, someone placed a baked potato just out of the baby’s reach in hopes that he would wriggle free in an effort to obtain the tasty snack, but the husky infant has yet to show any interest in the potato, electing instead to stay put and ham it up for its emotionally drained throngs of visitors.

Amazing. Seeing that the baby is helping so many Americans practice self-care and weather the pain of Trump’s presidency, here’s hoping that it sticks around for a long, long time—preferably the next four years. Otherwise, a lot of people will need to find a new source of hope.