Punching Back: Hillary Clinton Invited The ‘Access Hollywood’ Bus To Sit In The Front Row Of The Debate 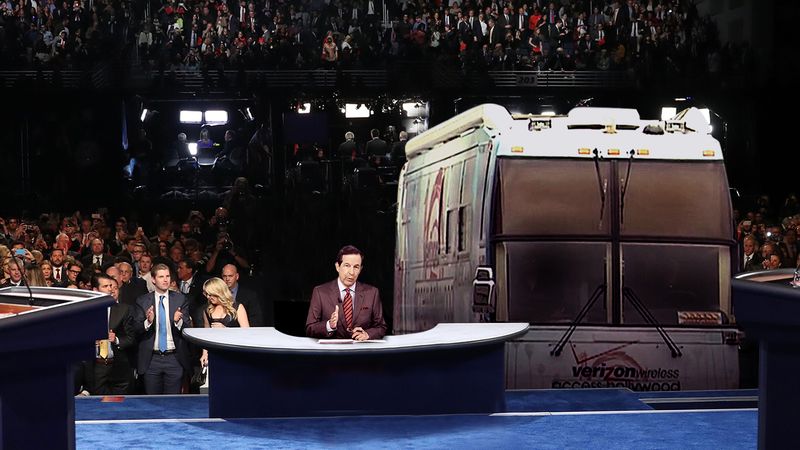 Right from the get-go, this debate is proving to have just as many fireworks as the first two.

Donald Trump made headlines during the previous presidential debate when he attempted to unnerve Hillary Clinton by reserving several seats for women who had accused Bill Clinton of sexual assault. But the former secretary of state isn’t taking it lying down. Hillary just struck back in a big way by seating the Access Hollywood Bus in the front row of the audience of tonight’s debate.

Looks like Clinton just gave Donald Trump a taste of his own medicine!

Whenever the GOP nominee looks into the audience tonight, he’ll find himself face-to-face with one of the key players of the scandalous videotape that shined a public light on his history of sexual assault and treatment of women. You could call what Clinton just did a little petty, but let’s face it, seating the Access Hollywood Bus as close to Donald Trump as possible is just her way of using Trump’s dirty politics against him.

From the moment that Trump walked on stage and saw the bus’ all-too-familiar Verizon Wireless logo, it was clear that Clinton had struck a major psychological blow against her opponent. Trump was visibly horrified when he saw the Access Hollywood Bus looming just behind debate moderator Chris Wallace, and cameras even caught him mouthing the word “bus” to himself as he took his place at his podium. Turns out if you throw a punch at Hillary Clinton, you’d better be prepared for her to punch back!

Even in the opening minutes of the debate, you can tell that Trump has been completely unnerved by seeing the Access Hollywood Bus in the front row of the audience. During an impassioned statement about strengthening the border, Trump trailed off mid-sentence and stared directly into the headlights of the bus for nearly 10 seconds before he was able to compose himself and continue. Throughout the debate so far, he’s been shooting rushed glances at the bus, as if he wishes it would just drive out of the auditorium.

There’s no doubt about it, Hillary Clinton just got even. Trump’s going to have to spend the entire debate just a few feet away from the Access Hollywood Bus, and it looks like he might not be able to handle it. Thanks to Clinton’s savvy move, this very well may turn into the longest 90 minutes of Donald Trump’s life.