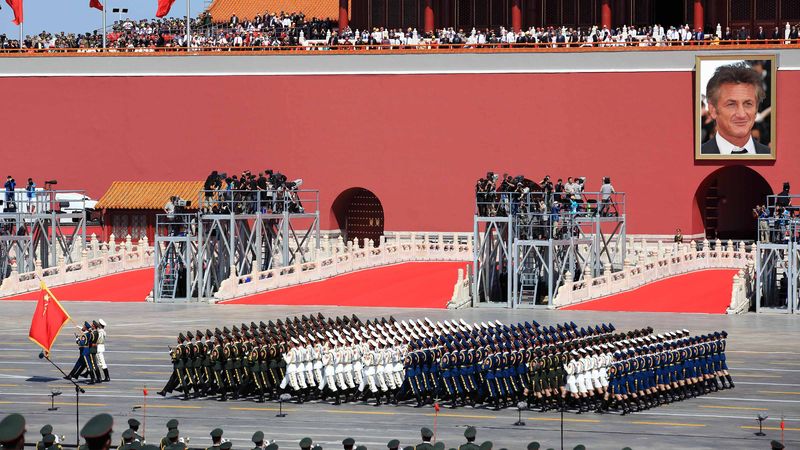 Yesterday was an emotional day in China, as the People’s Liberation Army held a national military funeral for movie star Sean Penn.

It was a time for solemn mourning and reflection, and Chinese people all across the country took the day off work to attend the many elaborate ceremonies and pay their final respects to the Hollywood legend.

Somber military processionals were held throughout all major Chinese cities featuring hundreds of thousands of Chinese soldiers marching in lockstep. According to reports, Chinese citizens across the country lined the streets and threw flowers at the feet of the marching soldiers, with many weeping or clutching framed photographs of Sean Penn to their chests.

Since the Chinese military was not able to recover Penn’s body, a life-size mannequin was produced and placed inside an ornate ivory casket. Chinese president Xi Jinping himself then stepped forward, visibly sobbing, and placed a Chinese flag over Sean Penn’s coffin.

“From Carlito’s Way to Milk, Sean Penn’s art and work have touched our souls and enriched our lives,” President Xi said in a statement that was broadcast nationally on every major Chinese news station. “We shall never forget Sean Penn, and his legacy will live on forever in the hearts and minds of the People’s Republic of China.”

The military band then played the Chinese national anthem as a small group of soldiers gently placed the casket into a five-story mausoleum within the Sean Penn shrine.

Today, the Chinese people have returned to work, but a rotating battalion of armed guards will stand 24-hour watch over Sean Penn’s mausoleum forever. It’s a poignant way to honor an artist who produced such powerful work.