Security Failure: President Obama Has Been Sitting Alone In The Kansas City International Airport For The Past 4 Days 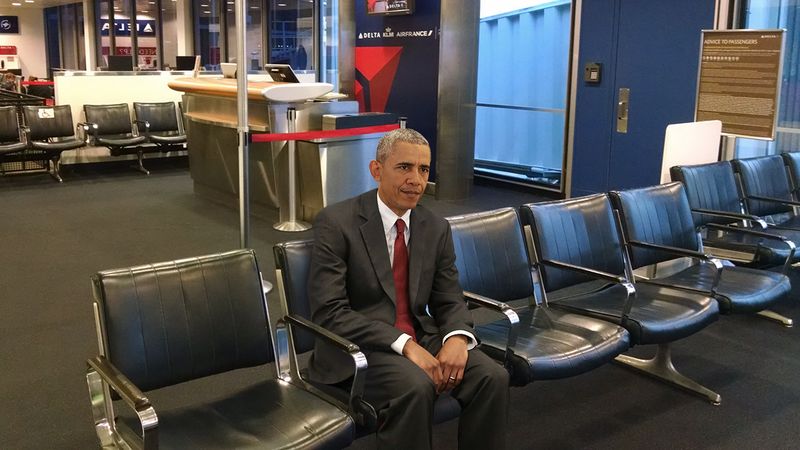 We’re lucky that the president is safe and sound today, after those in charge of protecting him failed in a massive way to do just that. According to a White House spokesperson, President Obama was left completely alone in the Kansas City International Airport for the past four days, before Secret Service agents realized their error and picked him up late last night.

This is a security failure of truly epic proportions.

POTUS arrived in Missouri last Saturday morning for scheduled meetings but almost immediately became separated from his security detail just steps into the terminal. In a gross display of incompetence, the president’s team failed to notice and continued on with the trip’s itinerary, leaving the commander in chief to sit on a bench outside gate B15 and await their return, completely by himself.

For the next 86 hours, hundreds of flights took off and thousands of passengers arrived and departed while the president waited in the terminal. With the sheer volume of people passing through, it’s a miracle that POTUS remained unscathed by the time Secret Service agents became aware the president was not with them and recovered him four days later. Even still, that doesn’t excuse the agency’s extremely troubling negligence.

“At 8:47 a.m. local time Saturday, Air Force One landed at Kansas City International with the president onboard,” said Secret Service Director Joseph Clancy in a press conference earlier today. “At 11:09 p.m. Tuesday night, a Secret Service agent alerted me that no one was sure where the president was. After a detailed search of the White House and its grounds, agents flew back to Kansas City International, where POTUS was spotted buying a pretzel from Auntie Anne’s in terminal two. We regret our oversight and will be investigating the matter further.”

Forget investigating the matter, someone needs to get fired ASAP. We as a country trust the Secret Service to protect our president, and if it can lose track of the president for four straight days, what purpose does it serve? We need to make sure this never happens again, before it’s too late.