Seems Like A Weak Choice, But Okay: Oxford English Dictionary Has Announced That Their Word Of The Year For 2021 Will Be ‘Worm’ 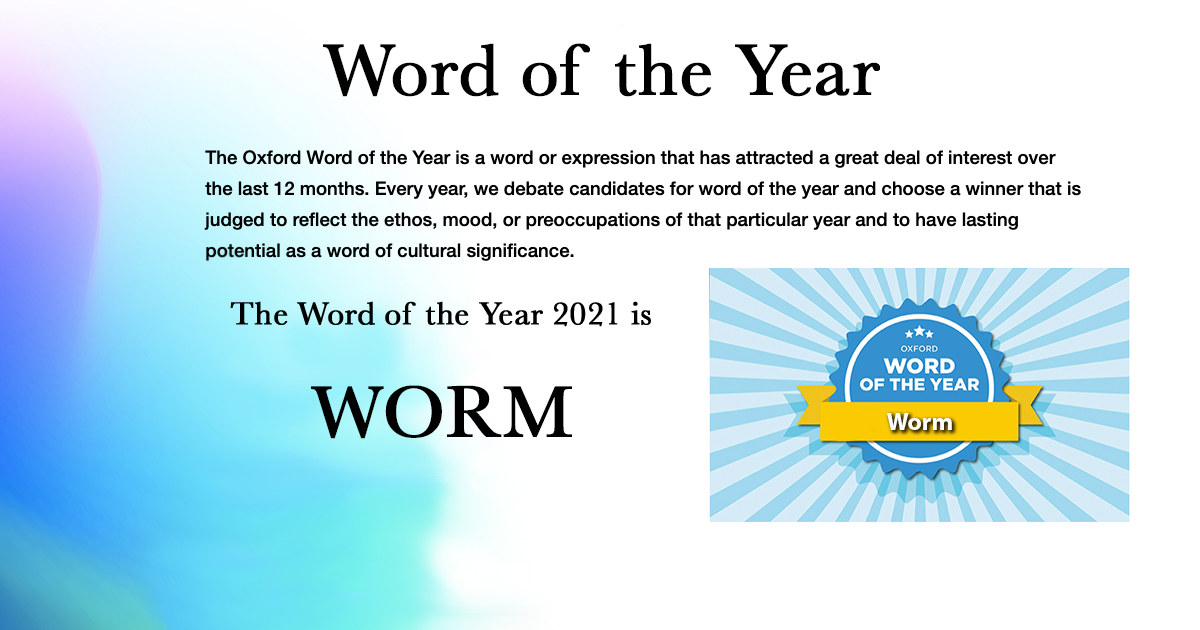 Huh. Worm. Feels like they could have picked something with a bit more oomph, no?

Editors at OED, who historically have chosen words with unique cultural importance in a given year, such as “climate emergency” in 2020, announced this week that their official word of 2021 will be “worm,” defined as “any of numerous relatively small elongated usually naked and soft-bodied animals (such as a grub, pinworm, tapeworm, shipworm, or slowworm).” In a post on the OED website, the publishing company explained that the word “worm” was carefully selected by the Oxford Languages team due to its relevance to contemporary life, observing that “worms are all over the place” and “everybody loves a good worm.”

“After several months spent culling a list of thousands of words vital to the modern English lexicon, we have decided that 2021 is best encompassed by ‘worm,’ a word which can be used in such powerful sentences as ‘Worms live in the dirt’ and ‘I stepped on a worm,’” the post read. “As 2021 comes to a close, we urge our dictionary readers to reflect on the significance of ‘worm’ and what it means to them, whether it be a nice slimy earthworm or more of a maggot-type thing.”

Okay…you have to think there’s a word more relevant to 2021 than worm. Maybe “vaccine”? “Antibodies”? Something like that?

The Word of The Year page on OED’s website even details the shortlist of words and phrases that were nearly chosen this year, which apparently included “big worm,” “dead worm,” and “wormlike”—all of which are pretty much on par with “worm” as far as being a bit out of left field goes. We’re not totally sure what was going on at OED this year, because if they were paying attention to what people are talking about they’d know that even something straightforward like “coronavirus” would be a stronger pick. Anyway, looks like we’re stuck with “worm” for this year, so let’s just make the best of it.