Sending A Message: J.C. Penney Will No Longer Sell Mike Pence’s Line Of Jockstraps That Shock You Whenever You Think About A Naked Island Woman 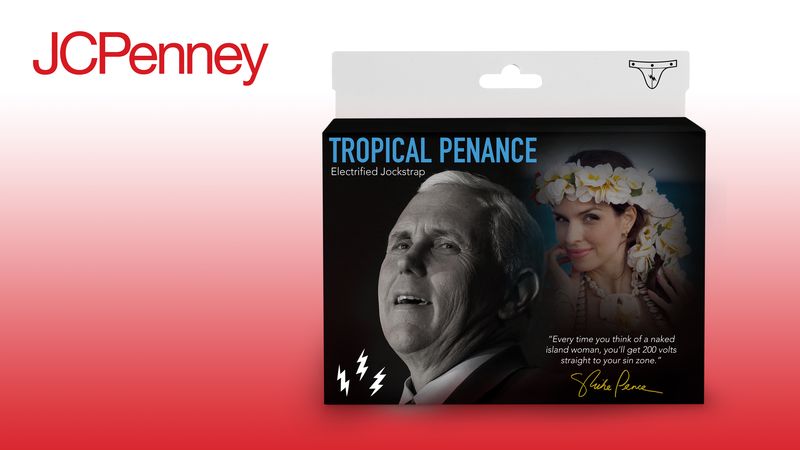 The number of retailers attempting to distance themselves from Donald Trump continues to climb as the new administration settles in, and now it looks like J.C. Penney is adding itself to that list. The department store enterprise has complied with the demands of the people and will no longer be selling Mike Pence’s line of jockstraps that shock you whenever you think about a naked island woman.

J.C. Penney has spoken, and it looks like it is not on board with Trump’s White House.

The vice president’s signature jockstraps, which blast more than 200 volts of electricity through the user’s “sin zone” any time they think about a “glistening, mocha-skinned island girl sunbathing nude along the shore, trade winds blowing her long hair off her bare shoulders,” are intended to punish even a whiff of impurity, and as of yesterday were available in J.C. Penney locations nationwide. But now, as the new administration makes one controversial move after another and angry consumers have threatened to boycott the store if Pence’s Tropical Penance product line remains on shelves, the contraption that will send an electrical jolt searing through your pelvis for even a momentary daydream about a naked island woman playfully hiding behind a palm tree is officially getting the boot.

Wow! Talk about voting with your wallet! And from their statement, it’s clear the nationwide department store got the message:

“While J.C. Penney has enjoyed working with Vice President Mike Pence, it simply is not in our best financial interest to continue this partnership by selling his line of electrical jockstraps that punish wearers every time they fantasize about a naked island woman,” said J.C. Penney CEO Marvin Ellison in a written statement. “Our stores will no longer be carrying this punishment jockstrap or the version that shocks users’ genitals when they fantasize about a busty Nordic woman at the top of a snow-capped mountain wearing only her ski boots, though we wish the vice president luck with everything moving forward.”

While Mike Pence has remained quiet since J.C. Penney dropped the news, we can’t imagine that he’s too happy either. It’ll be interesting to see just how far this beef between Trump’s White House and the growing mass of retailers will go.