Shaking Up Washington: Donald Trump Just Appointed A Cloaked Man As Secretary Of The Hook 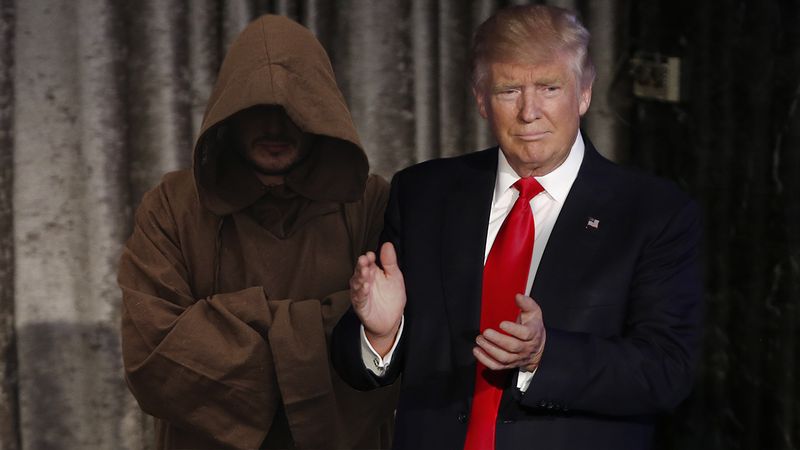 Time to say goodbye to politics as usual.

In another stunning game changer that has further upended the political establishment, President-elect Donald Trump this morning announced the nomination of a mysterious cloaked man to serve as his secretary of the Hook.

Yep. Trump promised change, and right away he’s appointing a nameless robed man to lead the Department of the Hook. How’s that for a shock to the system?

The silent man, whose face is completely shrouded within a thick, hooded cloak, is rumored to have topped the shortlist of candidates for secretary of the Hook after emerging alone from a dense forest at night and immediately causing all greenery within the Washington beltway to wilt.

Trump has already lauded his nominee as “a wonderful man with an absolutely tremendous cloak” whom he trusts do an “unbelievable job” discharging the duties of the position, which include abiding by the Hook, interpreting the Covenant of the Hook, and holding aloft the candle whose flame subtracts light from its surroundings.

“The man in the cloak is going to be a fantastic secretary of the Hook. Just fantastic,” said Trump, who added that the secretary will be second in the presidential line of succession. “No one is better qualified to enforce the covenant than this man. His cloak is dark, he was born before Christ, I don’t know his name, he has the Hook now, and he’s ready to fight for us!”

And don’t look now, but the presumptive secretary of the Hook is already making waves. At dawn this morning, he led the Zealots of the Hook in a procession through the streets of Washington, toward the open entrance to the Onyx Pyramid, an edifice by the Lincoln Memorial that residents could not remember ever having existed but that the cloaked man assured Americans in a terse press release “has always been and shall forever be.”

One thing’s for sure: This appointment signals a whole new political era in the nation’s capital. We can’t wait to see how this bold move turns out!