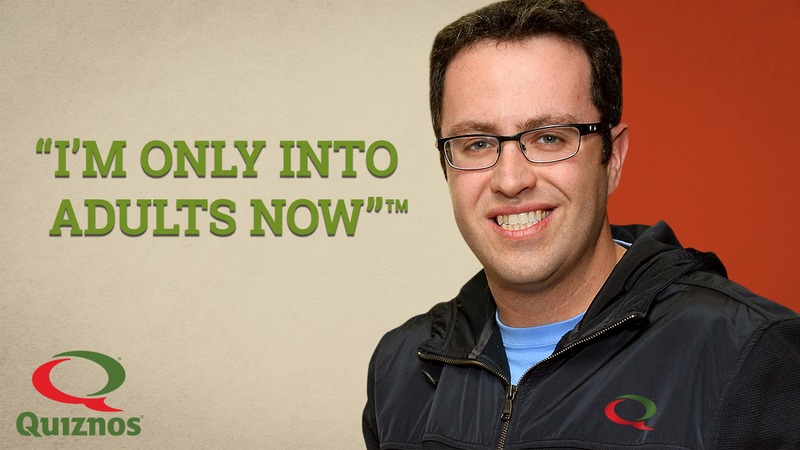 Two titans of the fast-food industry started taking some high-profile shots at each other this week, and honestly, we can’t look away. In a seriously epic move that has sent shockwaves through the marketing world, Quiznos has hired former Subway spokesman Jared Fogle for a new ad campaign claiming that Quiznos sandwiches cured his pedophilia.

In case you haven’t seen, Quiznos launched its newest ad campaign last night with a series of perfect TV spots that feature Fogle standing in front of a sandwich counter and thanking Quiznos for making sandwiches that take away his urge to have sexual intercourse with children. Fogle smiles at the camera and proudly announces that, when he worked for Subway, he was a pedophile, but Quiznos signature oven-baked sandwiches completely cured him of all urges for sexual contact with minors.

“I used to be a pedophile, but now, thanks to Quiznos, I’m only sexually attracted to fully grown adults,” says Fogle in one of the new takedown ads, while walking down a sunny street and smiling widely. “Did I do unspeakable acts with children when I was eating a steady diet of three Subway sandwiches a day? Of course. You can find it on my criminal record. But since eating Quiznos, my sexual preferences have totally changed. Quiznos cured me of my pedophilia, which is a lot more than I can say for Subway.”

Ouch. Subway’s got to be feeling the hurt with this one! As the absolutely savage commercial continues, Fogle enters a Quiznos restaurant, walks up to the counter, and asks the cashier for “One oven-roasted Italian sandwich, please! And then, sex with a consenting adult”—at which point the convicted felon grabs a sandwich from behind the counter, takes a bite, makes momentary eye contact with a small boy, and then walks around him out the door while laughing to himself and shaking his head.

Quiznos definitely landed a major blow to its competitor with this one! If we were Subway’s marketing department, we’d be absolutely freaking out right now. Especially because Quiznos apparently has a full slate of multimillion-dollar commercials airing featuring Jared, including one where he walks around a neighborhood knocking on doors and saying the line, “Hi, I’m Jared Fogle and I live next door. I used to be a convicted child molester while I ate Subway sandwiches, but Quiznos cured me”; or another, where Fogle holds up a pair of orange jail pants, and smiles and asks, “Can you believe I used to wear these?”

Needless to say, Subway needs to come up with a response fast, because Quiznos is doing everything in its power to send shots Subway’s direction. So buckle up, because according to rumors, Quiznos signed Fogle to a long-term exclusive contract, and it looks like this bold new ad campaign is just getting started!