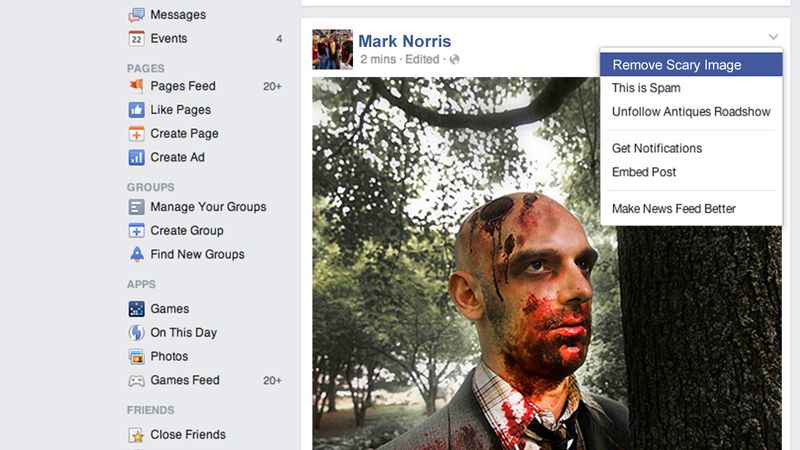 It might not have happened to you, but millions of Facebook users have had some of their pictures removed without their consent.

Since the social networking site added the “report as scary” button for pictures, millions of photos have been taken down for violating its strict no-scary policy. Banned pictures have included images of shrieking banshees, old houses at twilight, graveyard mist, and other depictions of frightening or blood-curdling content.

All this has us wondering: Should Facebook stop banning scary pictures?

Facebook maintains that the no-scary policy is simply an effort to make sure the site is appropriate for all ages, but many users are saying a ban on images that chill you to the bone and make the hair on the back of your neck stand on end is a violation of their free speech.

“I don’t see why it’s Facebook’s concern if I want to post a picture of me and my boyfriend crawling with inverted joints on the ceiling of a haunted house,” said Facebook user and originator of the currently trending #StopCensoringScary hashtag, Allison Lerrod. “Things that go bump in the night are beautiful to me, and as a Facebook user, I shouldn’t be punished for posting these kinds of ghastly images to my wall.”

Much of the criticism surrounding the issue is that the system that enables users to report images is imperfect and frequently results in the removal of pictures that aren’t explicitly scary. One user made the side-by-side comparison below to highlight the sometimes arbitrary distinctions Facebook appears to make in filtering sinister material:

There are more glaring examples. Earlier this month, Facebook user Monica Dunlever uploaded a picture of her daughter dancing with a Victorian-era ghost that was quickly taken down, despite the fact that the picture is clearly just whimsically eerie and not scary at all.

“Facebook’s screeners can’t always differentiate between scary and eerie pictures,” said Dunlever. “Lots of times, they lump pictures of scarecrows and dungeons in with images of eyeless demons and reanimated corpses. Clearly, there is a difference between the two: One is innocently spine-tingling, and the other is shockingly terrifying.”

But Facebook doesn’t seem to care. Regardless of user complaints, it is still committed to upholding its prohibition of frightening content.

“We’re not trying to ruin everyone’s fun,” explained a Facebook spokesperson in a recent official statement. “We just want to make sure our users who might get spooked by images of creatures lurking in the night or dolls coming alive don’t have to encounter them on our site. We owe it to them to provide a space that is free of this kind of ghoulish and petrifying material.”