Side Hustle Or Abuse Of Power? A New Report Shows Members Of Congress Made Over $10 Million Dollars Selling Marbles To Jimmy Carter In 2021 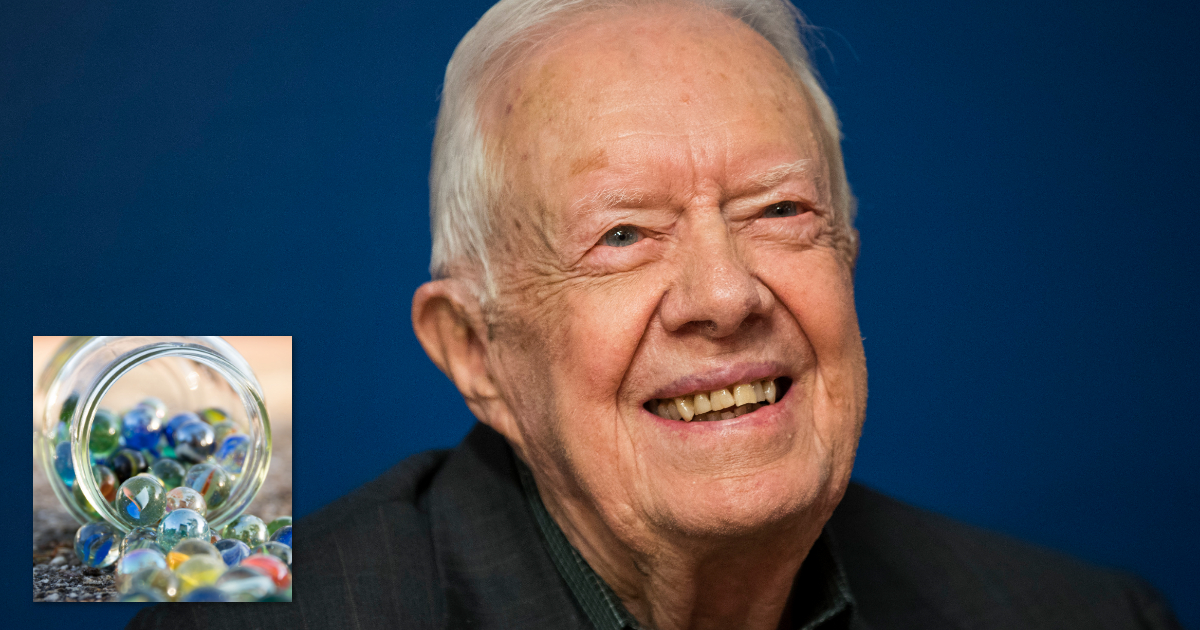 It’s no secret that politicians have often exploited public office to enrich themselves, but the lines between legal self-enrichment and outright corruption can sometimes be blurry. Now, a new investigative report shows how precariously some lawmakers are toeing this line, testing the boundaries between personal investing and flagrant abuse of power: Members of Congress made over $10 million dollars selling marbles to Jimmy Carter in 2021.

Wow. If an everyday American were to do this, that’d be one thing. But a member of Congress? Something about it feels unsavory.

According to Capitol Trades, an online platform that tracks the financial activity of sitting U.S. politicians, members of Congress sold $10.3 million worth of marbles to former President Carter last year, including Sen. Nancy Pelosi (D-CA) and Rep. Dan Crenshaw (R-TX), who ranked as the top two earners, respectively scoring $2.2 million and $1.98 million off of marble sales to Carter. Spokespeople for Pelosi publicly denied any wrongdoing, claiming that “Senators have the right to sell one marble to Jimmy Carter for $500,000, as do all Americans.”

However, the legality of these trades haven’t calmed critics, who claim that Beltway connections to Carter, and insider knowledge of his insatiable desire for holding marbles in his hands for hours on end because he likes the way they feel, give politicians like Pelosi and Crenshaw an unfair edge over everyday Americans.

“To put this in perspective, Congressional figures—as well as President Carter’s immediate and extended family members—beat the market by a wide margin in 2021, with the U.S. public only earning a sum total of $700,000 selling marbles to Jimmy Carter in the same tax year,” said the Capitol Trade report’s author, David Van Wert, adding that lawmakers, unlike the general public, can easily secure face-time with Carter by luring him to D.C. with false promises of congressional medals and/or McDonald’s breakfast. “If that doesn’t indicate a system designed to benefit the elite, I don’t know what does. It’s a sad fact that our public servants are driven by financial incentives, but to see them so brazenly profit off of Jimmy Carter’s hobby of flushing marbles down the toilet while clapping like a dimwit? In plain sight? Reform is long overdue.”

Responding to requests for comment, Mr. Carter stated that “Oh boy, well, I do own a lot of marbles…probably more than I can ever use in my lifetime. People sell them to me for hundreds of thousands of dollars apiece, which Rosalynn tells me is too much. And maybe it is—I’ve spent everything I’d saved for retirement on marbles and then some. But, boy oh boy, I just can’t help it. The marbles feel so nice, and I like the relaxing sounds they make when you shake a bag of them right next to your ear, and Nancy Pelosi brings me such nice ones. They’re so small, and she jiggles them in my face, and I get smiling and write out a check before I even know what I’m doing. Some fellas spend their money on sports cars and golf, but ol’ Jimmy? It’s marbles, marbles, and more marbles for me.”

Hmm. Even though Mr. Carter likes the marbles, something about this still feels wrong.

Whether it’s legal or not, it’s troubling to see politicians exploiting their power to make millions off of Jimmy Carter when so many regular Americans are struggling to make ends meet. Here’s hoping that some laws can be enacted to prevent lawmakers from gaming the system like this in the future.