Silencing Dissent: Donald Trump Just Threw An Elderly Version Of Himself Out Of His Rally For Shouting ‘Beware Hubris!’ 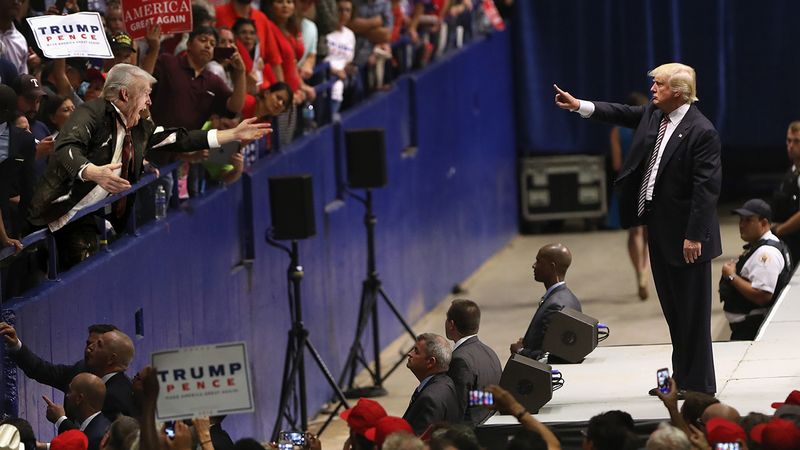 Looks like Donald Trump’s habit of silencing any and all criticism at his rallies is still going strong. At a rally yesterday, the headstrong Republican presidential nominee ejected an elderly version himself for shouting “Beware hubris!” at him while he was in the middle of a speech.

Yikes. It looks like Trump is more committed than ever to stamping out negative feedback!

The incident occurred while Trump was addressing a crowd of supporters in New Hampshire. In the middle of Trump’s speech an older version of the presidential candidate with sunken eyes and wearing a tattered Trump-brand suit forced his way to the front of the crowd, locked eyes with the original Trump, and began shouting, “Heed my warning! Beware hubris! Those who sew the fields with monuments to their own glory reap only their own ruin! I am you and you are me! We share the same demented, rotting soul, though I have weathered more hardship and witnessed more terror! We are Donald Trump! We are doomed!”

Trump immediately responded by shouting, “Get him out of here! I don’t care if he’s me! He’s gone!” This is typical Trump. Rather than engage with an elderly specter of his own mortality, the Republican nominee chose to respond to criticism by suppressing it completely.

Trump’s security guards immediately began manhandling the gray-haired, wrinkled Donald Trump, dragging him kicking and screaming out of the room.

As usual, some of the scariest responses to the elderly protester came from Trump’s supporters. As the elderly version of Trump shouted, “The first circle of Hell is reserved for tyrants and warmongers!” his cries were drowned out by the sounds of audience members shouting profanity and threats at him. How can we expect political dialogue to survive in America if Trump supporters are going to react with furious vitriol every time an aged duplicate of their candidate appears to offer warnings about the dangers of coveting power above all else?

Trump’s behavior at the rally only got more abominable from there. Several minutes after the older duplicate of Trump had been ejected from the rally, an even older version of Trump, this one so withered and wrinkled that he looked to be on the verge of death, forced his way into the rally leading a third Donald Trump—identical to the Republican candidate in every way, but 8 feet tall, morbidly obese, and nude—into the arena on a leash.

The ancient Donald Trump further disrupted the rally by pointing at the obese Trump he had led in on the leash and shouting, “Gaze now upon your true form and despair!” to the Republican nominee. “This is the grotesque visage of your gluttonous, power-mad soul! You walk the path of the damned, and this brute awaits you at the end of the road!” the ancient version of Trump added.

At first it seemed like Trump was finally going to engage with his critics: The current day Trump made momentary eye contact with his prophetic obese version while it wordlessly moaned and spit up on himself. But it again turned out to be business as usual for the headstrong GOP candidate, who once again shouted, “You losers are gone!” and ordered his security detail to eject the elderly protester and his bloated doppelgänger.

It looks like if you’re an ancient, chiding version of Donald Trump, it doesn’t take much to get ejected from a Trump rally!

This is definitely an unnerving pattern of behavior from somebody hoping to become president of the United States. Hopefully, if Donald Trump ends up becoming president he’ll be more open to political opposition, because if he treats people who disagree with him the way that he treated the older versions of himself in New Hampshire, American democracy might be in danger.