Smart Call: Ruth Bader Ginsburg Has Been Dead On The Supreme Court Bench For 3 Months, But Democrats Are Febrezing Her Every Day In Hopes That No One Notices 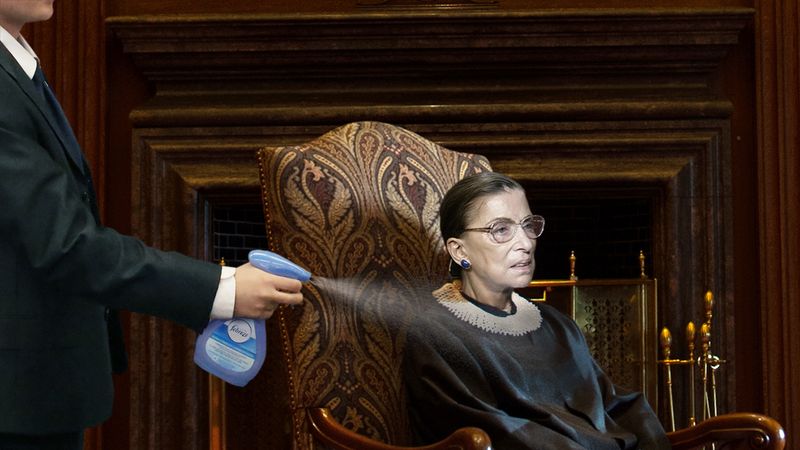 If there’s anything this wild year in Washington has shown us, it’s that the traditional rules of politics no longer apply. After months of Republicans defying all the usual conventions of bureaucracy to win unprecedented power in government, it looks like the Democrats are finally responding in kind. According to sources, Supreme Court Justice Ruth Bader Ginsburg has been dead for over three months, but Democrats have been spraying Febreze on her every day in hopes that no one else notices she’s no longer alive.

One of just four reliably liberal jurists on the court, Ginsburg is key to maintaining a bipartisan balance in federal law, and Democrats are showing that they won’t let her death diminish any of her influence over policy. Spritzing her corpse up real good with Febreze every morning and taping her eyes open in a lifelike expression, left-wingers from all over Washington have been pitching in to give the now-deceased justice the appearance of sentience so as not to forfeit her seat to a conservative appointment.

“She’s definitely got a stink to her, but we simply can’t afford to back down on this,” said a high-ranking Senate Democrat speaking on condition of anonymity. “It’s an unprecedented strategy, but as long as we keep masking Ruth with Febreze, we should be able to hang onto her seat.”

“One of her eyeballs keeps falling out,” the source added.

Moved to and from hearings on a rolling chair by fellow liberal Justices Elena Kagan and Stephen Breyer, Ginsburg’s corpse has been present for all judicial obligations in recent months, and slight lurching movements caused by the escape of bodily gasses have created the illusion of spirited participation, making her appear at least as engaged in deliberations as her famously reticent colleague Clarence Thomas. However, as the stench of decomposition wafting from her cadaver grows increasingly ripe, some party leaders are starting to worry that Febreze won’t cut it for four more years.

“We might eventually have to laminate her or something,” said one congressional source who likened the smell of Ginsburg’s body to that of an old rotisserie chicken that’s been sitting at the bottom of a trash can for a while. “Or maybe we could stuff her with air fresheners. We’re gonna have to figure out something if we don’t want to lose serious ground in the judicial branch.”

While it’ll undoubtedly be a tough ruse to keep up for the entirety of Donald Trump’s presidency, you have to hand it to Democrats for finally stepping up and doing what it takes to survive in this new era of guerrilla politics. Knowing what an iconoclast RBG was, you just know having her corpse regularly doused in Febreze is exactly what she would’ve wanted.