Space Race 2.0: NASA Just Shot A Used Pickup Truck 30 Feet In The Air With A Trampoline To Compete With SpaceX’s Falcon Heavy Launch 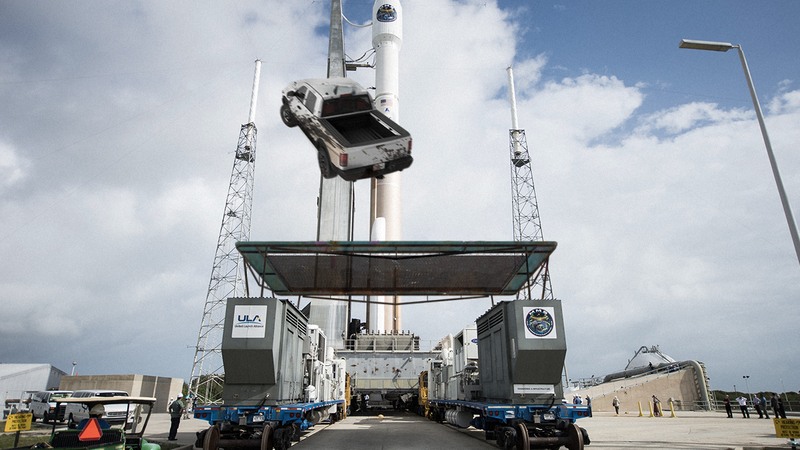 All eyes were on SpaceX yesterday as it successfully launched a Tesla Roadster out of Earth’s atmosphere with its newest rocket. But NASA clearly isn’t rolling over and allowing Elon Musk to anoint himself the unquestioned leader of space travel, because the federal agency just shot a used pickup truck over 30 feet into the air from a trampoline.

Watch out, SpaceX, because we’ve got a 21st-century space race on our hands.

The mood was tense this morning when dozens of NASA engineers carefully pushed a 1997 Ford F-150 off the roof of a Central Florida Best Buy and onto a precisely placed trampoline, but nerves turned to jubilation when the truck bounced an incredible 32 feet into the air before crashing fender-first onto the parking lot. And when NASA engineers saw that the totaled chassis of the truck was nearly half in the large square they had drawn in chalk designating where they thought the truck would land, the entire department erupted in a huge cheer.

Not to be outdone by SpaceX’s massive publicity push for its launch, NASA had dozens of spectators there to witness every aspect of the mission, with several people who had been doing errands in the area also stopping to glance at what was going on. One particularly excited space fan rushed over to NASA personnel, demanding to be compensated for damages after an axle of the launched truck came flying off when it landed and smashed through the windshield of his car parked nearby.

Um, yeah. The space race is officially BACK.

Clearly, neither SpaceX nor NASA will be taking a backseat in the space race anytime soon. It looks like the competition will only get more intense as both set their sights on Mars travel and deep space exploration, and we’ll be watching to see who comes out on top.