Staying Pure: Mike Pence Is Crushing His Testicles With The Lincoln Bible After Being Aroused By The Feminine Contours Of The Capitol Building 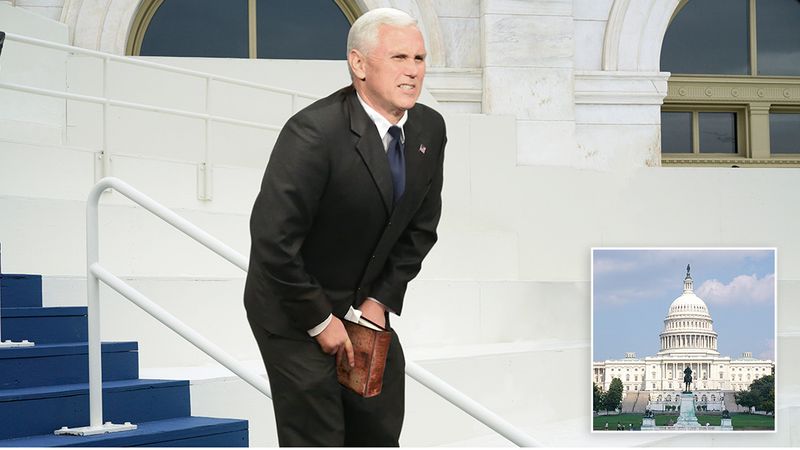 It’s no secret that our vice president-elect is a deeply Christian man, but today, at Donald Trump’s presidential inauguration, he proved that the scripture is much more than just a talking point. After noticing the U.S. Capitol Building’s alluring feminine contours and becoming intensely aroused, Mike Pence atoned in front of all of Washington by seizing the Lincoln Bible and using it to absolutely crush his testicles.

Wow. You’d be hard-pressed to find anyone more committed to their faith than Mike Pence!

As he stood on the Capitol steps watching Donald Trump recite the oath of office, Mike Pence caught sight of the building’s round, curvaceous dome and immediately became filled with immoral thoughts. Rather than burying those thoughts, the vice president waited for the oath to end, grabbed Lincoln’s Bible off the podium, held it above his head, and repeatedly smashed it into his groin as hard as he could, thus purifying himself in the eyes of the lord.

Mike Pence is definitely practicing what he preaches. Even when the crowd went silent and Chief Justice John Roberts attempted to remove the Bible from Pence’s flailing hand, the vice president doggedly continued his public penitence, not once looking away from the 300-foot-tall Capitol as he simultaneously shouted prayer and pulverized his crotch over and over again with the holy book.

After a full two-and-a-half minutes of anguished grunts and screams echoing throughout the National Mall, Pence finally dropped the Lincoln Bible to the ground below and, quivering with teary eyes before Congress and the Senate, indicated he had finished. Half an hour later, however, during a performance by the United States Marine Band, the curvaceous, suggestive shadow of the Capitol once again loomed into Pence’s view, at which point he picked up the Bible again, flipped through the pages until he found Psalm 51:10, said it aloud to himself, and slammed the book shut as hard as he could around his genitals.

As he shuffled off the stage with his eyes glued to the floor and a very slight limp, the new VP left zero doubt that he is devoted to his principles and holds everyone, including himself, to a strict moral standard. It will certainly be interesting to see how he brings that zeal to bear over the next four years!