Taking Charge: Steve Bannon Volunteered To Take A Few Shifts From The Sniper On The White House Roof 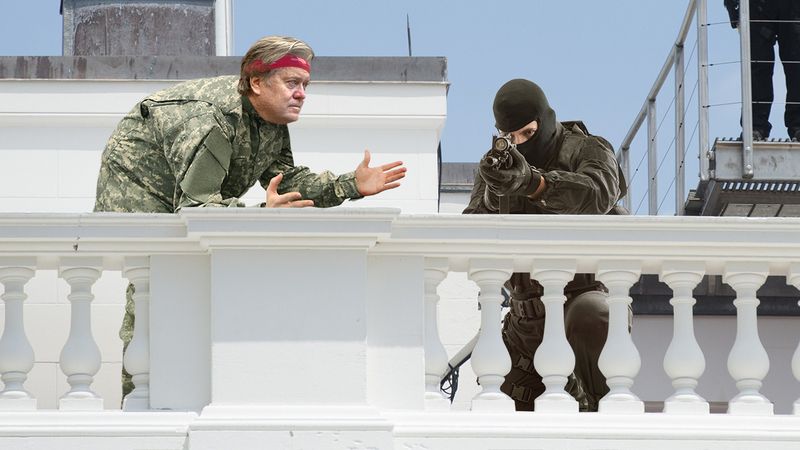 Steve Bannon’s influence in Donald Trump’s administration has been well-documented, and now it looks like he’s trying to extend his calculating reach even further. The president’s right-hand man just approached the sniper stationed on the White House roof and offered to cover a couple shifts if he wants to take a break.

Wow. Bannon certainty seems determined to have a hand in every level of White House operations, and it doesn’t look like anyone is about to get in his way.

“I’ve got you covered if you want to take a 56- to 98-hour break, brother,” Bannon said through clenched teeth as he bit down on a bowie knife, army-crawling toward him with his own rifle strapped to his back. “We’re comrades in the same fight, so if you need a sub-in, I’m right here for you.”

The president’s most trusted advisor then took to one knee and surveyed the perimeter using the scope on his weapon, muttered to himself, “I dare someone to make me pull this trigger,” a few times, then returned to lying on his stomach next to the sniper.

“If you need anything, I brought plenty of gear,” Bannon half-whispered as he unzipped a backpack full of ammo, deer jerky, and bandanas to show the marksman facing the South Lawn. “You’ll notice I didn’t bring a sleeping bag, because I won’t be needing one,” he said, carefully assessing a tour group of eighth-graders 200 yards off of the West Wing.

“I just downed 500 milligrams of desoxyn and about 4 liters of Diet Dr. Pepper, so I’m ready to rock and fucking roll,” the White House chief strategist added.

Yeesh. Whether or not you think Bannon should have this sort of influence in the president’s administration, there’s no doubt that he’s got the power to call some serious shots in Trump’s White House, and he’s using that power to do things his way.

After streaking some eye black across his cheeks, Bannon began holding his breath in an attempt to prove his aptitude as a substitute for the sniper, who continued to stay focused on his post.

“That was a bad one, but I can usually go for about three minutes, easy,” Bannon panted after nearly 30 seconds. He spit off the side of the White House to gauge how far up they were and continued. “It’s probably the elevation that’s throwing me off. Give me a couple minutes, and maybe I’ll give it another shot.”

“Cover me,” he barked moments later, jumping into action. The newly permanent member of the National Security Council fastened himself onto a cable he secured to the eastern wall of the White House and slowly began scaling down. He reappeared 45 minutes later bursting from an access door on the roof, covered in sweat and grass.

“I’m back,” he puffed, coiling up the rope attached to his grappling hook. “Now you go rest, comrade. I’ll keep watch over our revolution from the cold steel of my gun sight. The enemy swells.”

No matter what your opinion on Bannon is, he’s making his statement loud and clear: He’s primed and ready to take as much control in Washington as he wants, and it doesn’t look like he’ll be slowing down any time soon.