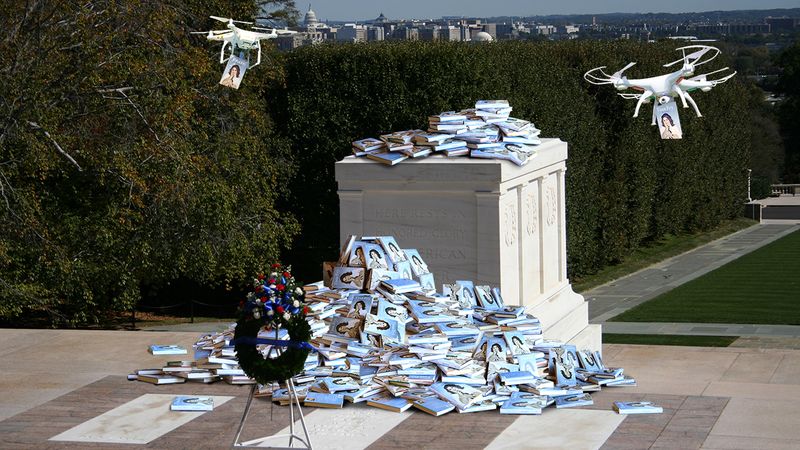 Today is not a good day for Amazon, to say the least. Though the online retailer has been preparing to make its Prime Air delivery service available nationwide, it’ll likely have to put those plans on hold in light of this seriously major technical difficulty: Amazon’s new delivery drones won’t stop carrying copies of Tina Fey’s Bossypants to the Tomb of the Unknown Soldier.

Yikes! Jeff Bezos is going to have some tech department heads rolling for this one.

Earlier this week, several alarmed employees at Arlington National Cemetery saw a dark cloud of drones crest the horizon and make a beeline straight for the tomb, each carrying a package containing copies of Bossypants that it’d drop on the monument before heading back to an Amazon warehouse, only to return to Arlington with even more copies. The drones have not stopped coming since.

Amazon’s customer support has been utterly swamped, fielding call after call about the unceasing tide of delivery drones dropping Fey’s memoir at the gravesite. The monument honoring unidentified service members who died in war is currently impossible to see under the thousands of copies of Bossypants it’s buried under. Additionally, the drone fleet is reportedly so massive that the collective buzz of its motors is deafening throughout Arlington’s premises and has already disrupted several military funerals.

Yeah…this isn’t a good look. Seems like Amazon’s not as ahead of the curve as it thought it was.

Much to Amazon’s frustration, its tech team’s efforts to solve the issue have been fruitless so far. The company is already feeling the hurt from this hiccup, too, with its stocks dropping by double-digit points this week and bound to drop even further if the monument is destroyed under the sheer weight of all the autobiographies, something Arlington officials fear will happen if the drones keep bringing more copies, particularly the heavier hardcover editions of Bossypants.

What’s certain is that it’ll be tough to get customers on board with Prime Air delivery after this. No one wants to risk buying something from Amazon if there’s a chance they’ll get a book they didn’t order, and especially if they only find that out after its delivery is severely delayed because it was taken to a military graveyard by mistake first.

“We’re aware of the issue, and our programmers are working around the clock to stop all Bossypants shipments to the Tomb of the Unknown Soldier,” said CEO Jeff Bezos in a public statement. “Amazon is doing everything it can to fix this problem and regain consumers’ confidence in our services as soon as possible.”

Try as Amazon might, the damage may be done for their delivery drone service. As the tech trades begin spreading this story, it’s hard to imagine people being willing to give Prime Air a shot. Amazon had better work out the kinks fast, because a setback this big could undo the years and years’ worth of work and resources it’s poured into this project.