The 13 Greatest Moments In Waffle History 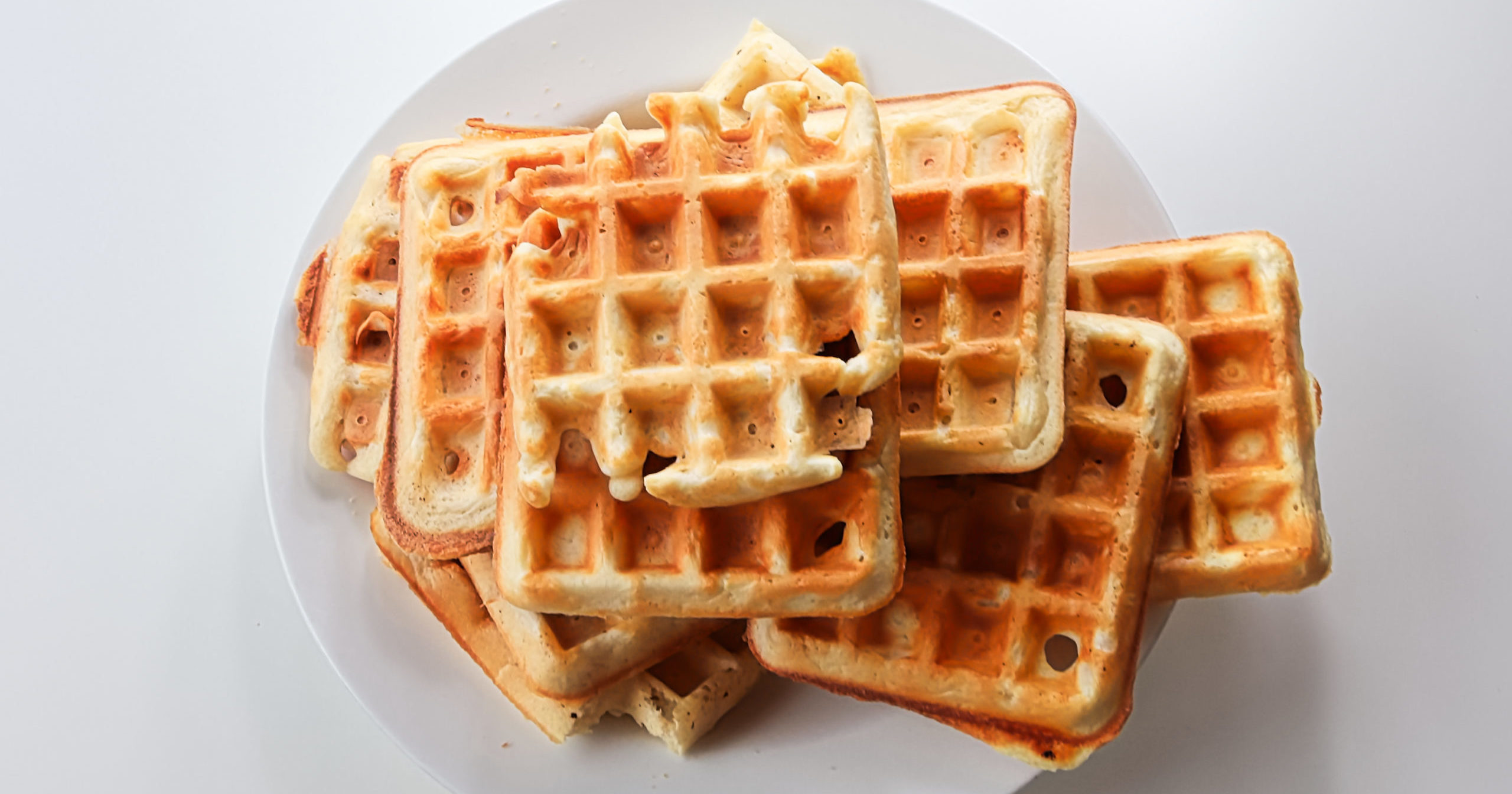 Since the beginning of time, waffles have been one of the most popular breakfast foods in the world. The history of waffles is a long one, filled with drama and adventure. Here are the 13 greatest moments in waffle history.

1) 150 Million B.C.: The world’s first waffle blinks into existence out of nowhere, hovers in midair for 10 seconds, and then vanishes into thin air

The world’s first known waffle appeared hundreds of millions of years ago, during the Late Jurassic Period, when dinosaurs ruled the Earth. One afternoon, a medium-sized Belgian waffle suddenly materialized out of thin air about four feet off the ground and hovered there silently for about 10 seconds before abruptly vanishing forever. The only living creature to see the world’s first waffle was a passing stegosaurus, who stared at the floating waffle until it disappeared. While the ancient reptile probably didn’t understand what he was looking at, he is nevertheless the first living creature in the history of our planet to see a waffle, and for that he must be celebrated. It would be countless eons before another waffle would appear on Earth, but this one was the first, and for that it will forever hold a hallowed place in waffle history.

2) 339 B.C.: Aristotle discovers that more than one waffle can exist at a time

In the ancient world, it was long believed that only a single waffle could exist at any given time. If you wanted to make a waffle but there was already a waffle that existed somewhere else, you had to wait for someone to eat that first waffle before you could make any additional waffles. This all changed thanks to Aristotle and his bold, unconventional way of thinking about waffles. Aristotle hypothesized that if there was already a waffle somewhere in the world, you could potentially cook a second waffle, thereby creating a world with multiple waffles. Aristotle proved this revolutionary theory by cooking two waffles and slapping them together like cymbals. Thanks to the Aristotelian Principle Of Multiple Waffles, we now know that as many as 600 waffles can exist in the world at any given time.

In the early days of the Qin Dynasty, Emperor Qin Shihuang sat down to breakfast and was served something incredible: a waffle that looked a lot like a dog. Instead of eating this miraculous waffle, the Emperor used a string to hang it from the ceiling above his royal bed so that he could look at it while he was falling asleep. News of China’s dog-shaped waffle spread quickly throughout the continent, and rival states such as the Mongols and Huns began mounting full-scale, horrifically violent invasions of China in an attempt to see the waffle. In a famous speech delivered to his men before battle, Attila The Hun was quoted as saying, “We don’t want to steal the dog-shaped waffle. We just want to see the dog-shaped waffle. There is nobody we won’t kill for a chance to look at the weird waffle.” In order to keep their dog-shaped waffle safe from the invaders, the Qin constructed the Great Wall Of China, one of the most astounding feats of architecture in human history. The impressive wall kept China’s dog-shaped waffle safe, and it remains one of the largest structures ever built exclusively for protecting a single waffle. The construction of the Great Wall Of China remains a watershed moment in waffle history.

The Medieval Persian scholar Muhammad ibn Musa al-Khwarizmi was a master of many disciplines, including mathematics and astronomy, but perhaps his greatest contribution to mankind was the creation of the world’s first Mickey Mouse waffle. While today waffles in the shape of Mickey Mouse’s head are considered commonplace, in al-Khwarizmi’s time the idea that a waffle could look like Mickey Mouse was almost unthinkable. At the time, Mickey Mouse’s name was not known to the people of the Islamic Golden Age, and scholars simply referred to him as “Goofy’s Sexy Elderly Friend.” The Mickey Mouse Waffle Of al-Khwarizmi was displayed in the legendary House Of Wisdom in Baghdad until its destruction in the 13th century. The waffle was the subject of intense study throughout the Islamic world and was used as the principal template for subsequent Mickey Mouse waffles for over a thousand years.

5) 1443: Langstrom The Living Waffle crawls out of the ocean

While there had been many waffles up to this point, none had been alive. That all changed during the 15th century when residents of the port city of Copenhagen gathered on the beach to watch a 150-pound, four-foot-tall waffle with arms and legs crawl out of the ocean. The waffle kept pointing to itself and screaming the word “Langstrom,” so people began calling him Langstrom The Living Waffle. For several years, the Danish government let Langstrom The Living Waffle wander freely around Copenhagen, but they soon threw him in prison because all he seemed to want to do was sneak into people’s houses and paint watercolor portraits of their sleeping children. Even though he was kind of a freak, Langstrom The Living Waffle remains an icon in waffle history for proving that sometimes waffles can be alive and annoying.

6) 1518: Martin Luther nails a waffle to the door of All Saints’ Church in Wittenberg

In 1517, Martin Luther nailed his 95 Theses to the door of All Saints’ Church and started the Protestant Reformation. One year later, Luther returned to the church and nailed a waffle to the door. Historians largely consider this less important to the development of Protestantism than the 95 Theses, but it is nevertheless a landmark event in the history of waffles.

World War I was a violent conflict the likes of which the world had never seen, and the destruction of six waffles over the course of the four-year war remains the single largest loss of waffles to combat in human history. To put it in perspective, only two waffles were destroyed in all other wars leading up to World War I combined. To this day, the tragic loss of these waffles, and the breakfasts they could have contributed to, reverberates throughout the world. In order to ensure that these waffles are never forgotten, the Queen Of England begins each morning by doing six push-ups, one for each waffle destroyed in the Great War.

After spending centuries in a Danish prison, Langstrom The Living Waffle strangled his guards and escaped. With his newfound freedom, Langstrom The Living Waffle wandered the streets of Copenhagen pointing to himself and saying “Jeg er Krybdyrets søn,” which is Danish for “I am The Reptile’s son.” This was the first time a waffle had escaped from a prison, and numerous books and graduate dissertations in Waffle Studies have been dedicated to analyzing the ramifications of the feat.

9) 1937: Amelia Earhart becomes the first woman to eat a waffle

On the morning of her final ill-fated flight, from which she never returned, the pioneering aviator Amelia Earhart shattered conventional gender roles by becoming the first woman to eat a waffle. Earhart described the waffle as tasting “like dust” and said it was “her favorite food.” Almost 100 years after Earhart’s historic breakfast, waffles are still enjoyed by people of all genders, a lasting testament to the legendary pilot’s courage in the face of adversity.

10) 1969: The Apollo 11 Lunar Mission discovers a waffle recipe written in the dust on the surface of the moon

The first-ever moonwalk became even more historic when astronauts Neil Armstrong and Buzz Aldrin found a recipe for something called “Oyster Waffles” written in giant letters in the lunar dust. The recipe read, in full: “Oyster Waffles. Ingredients: Sand, milk, waffle meat, butter, eggs, and gravel. Place ingredients in trash bag and shake all around to mix it up. Place trash bag in microwave for anywhere between 30 seconds and 1,000 years. Ingredients will become waffle inside the bag. Dump waffle out of trash bag onto a plate and serve to the most beautiful woman in the world.” When Neil Armstrong got back from the moon, he cooked Oyster Waffles for his wife according to the recipe. After eating them, his wife divorced him. The Oyster Waffle recipe remains the only waffle recipe ever discovered in outer space, though scientists predict there are potentially trillions of undiscovered waffle recipes in the depths of the cosmos.

In one of the most legendary basketball games ever played, Michael Jordan led the Bulls to a spectacular Game 5 victory in the 1997 NBA Finals despite having eaten nothing that day except for a single waffle. Prior to the game, experts predicted that Jordan would die of starvation sometime in the third quarter, but the hoops legend not only survived until the end of the game, but also managed to post a triple-double and sing “Take Me Out To The Ballgame” for the crowd between the third and fourth quarter. The Waffle Game was an epoch-defining moment in waffle history. It proved to the world that one waffle contained enough nutrients to fuel a professional athlete for an entire basketball game, and to this day most NBA players abide by a strict waffles-only diet on game days.

12) 2011: Langstrom The Living Waffle gets eaten by President Obama

For 600 years, Langstrom The Living Waffle had wandered the streets of Copenhagen telling people he was The Reptile’s son. As the years went on, he actually became a beloved figure in the city, and residents of Copenhagen would go to his nest and harvest his eggs, which would hatch into delicious waffles they could eat for breakfast. Sadly, Langstrom The Living Waffle’s time on this earth was cut short when, during a diplomatic visit to Denmark, U.S. President Barack Obama shot the sentient breakfast monster with a harpoon gun from the sunroof of his presidential limo and ate his delicious golden-brown waffle meat in front of a horrified crowd. President Obama later apologized for the incident, explaining that he had not understood Langstrom’s cultural and historical importance. “I thought he was just a regular living waffle,” Obama explained. “I didn’t realize he was one of the important living waffles.” The people of Denmark have never forgiven the United States for their president’s crime, and to this day Danish people call Americans “lejemordere af vaffelmanden” (“assassins of the Waffleman”).

After years of intensive research, a team of physicists at Stanford University figured out how to throw a waffle at a rat. The waffle hit the rat and the rat screamed. It was one of the greatest advancements in waffle technology to happen this century. Experts predict that within the next 100 years, throwing waffles at rats will be commonplace not just among the world’s foremost scientists, but by members of the general public. Future generations will no doubt look back at 2022 as the year that the world of waffles changed forever.