The 7 Guys You Date In College, All Gooped Up Into One Moaning Blob 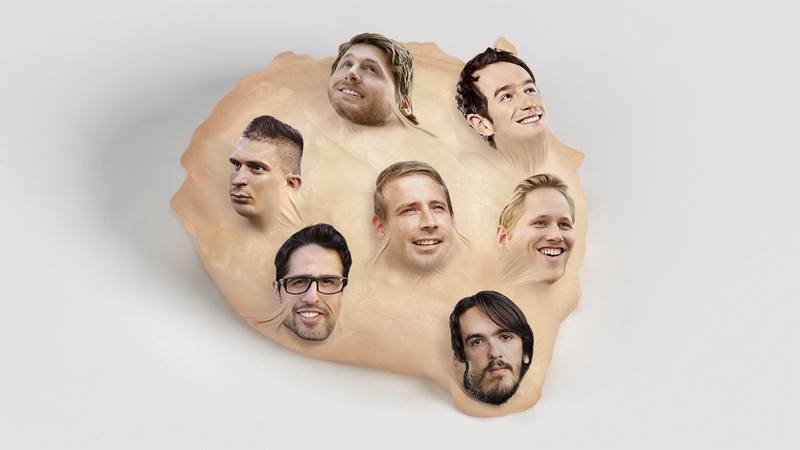 How many did YOU date? Check the pulsing blob to find out!

You’ll meet at a basement show your friends drag you to, and he’ll win you over with his soul-baring poetry set to the perfect mood music. Unfortunately, he’s only got enough room in his heart for one passion project, and you didn’t make the cut. Don’t worry, though, because now he’s all gloopy and howling as he drags his twitching bulk around on the hands he used to fingerpick his ukulele with.

His boat shoes and Barbour jacket may be totally pretentious, but that jawline is undeniable, though a little hard to see among the blob’s soft folds. He’s got an in at every frat house, and kissing him in the building named for his great-grandfather will seem almost romantic the first time, but a little creepy after that. Even after you break up, you’ve got to admit, there’s something hot about a guy with status, even when he’s coughing up a milky lubricant for the blob to slide on.

His six-pack abs may be fused to a gelatinous membrane in the blob, but you will enjoy his A-game bod in college when it’s not trapped underneath a thick, vein-strewn callous.

Of COURSE this guy is moaning way louder than the rest of the blob. Be it partying, bro-ing out, or you-know-what ;), the frat star always goes hard AF. Sometimes it’s exhilarating when you’re shotgunning beers together like you’re one of the guys; other times, he’s just flopping his once-powerful arms feebly, reduced to drippy biomass. You’ll date him ’cause #YOLO, but you’ll end it when it’s pretty clear he’s actually in love with his pledge bros. And if he seems happier in a goopy pile of boys than as your boyfriend, who are you to judge?

You’d never know it looking at the undifferentiated glop-pile throbbing with one flesh, but this guy is your rock. You share a hundred inside jokes, you can dance for hours without it ever getting weird, he’s silently mouthing for help as his individual mind slips away, and yup, one amazing night, you’ll finally see if you can make sparks fly. Even once you part ways, you’ll always be a part of each other, at least until he’s fully subsumed into the blob’s single, ever-expanding hunger.

If his vocal cords hadn’t melted into a gummy, fleshy cyst at the center of the flesh ball, this guy would probably be saying some snappy Noam Chomsky quote about how society is just like a glopped-together ball of college boys right now. He’ll get you both started doing Couch to 5K and a Whole30 diet, and you’ll promptly fall off of them when he starts applying to grad school and buries himself under a mountain of undifferentiated flesh and hair.

So wrong, pretty hot. Maybe better to keep this one on the DL, but we won’t tell if you don’t! What happens in office hours stays in office hours, but still ends up part of the All-Mind, and you’d be mortified if one of the few mouths on the blob still able to generate a few shrill syllables blurted it out. Live and learn!