The Crackdown Intensifies: Tampax Secret Police Just Rounded Up 40 Free-Bleeders And Sent Them To Their Menstrual Education Camp 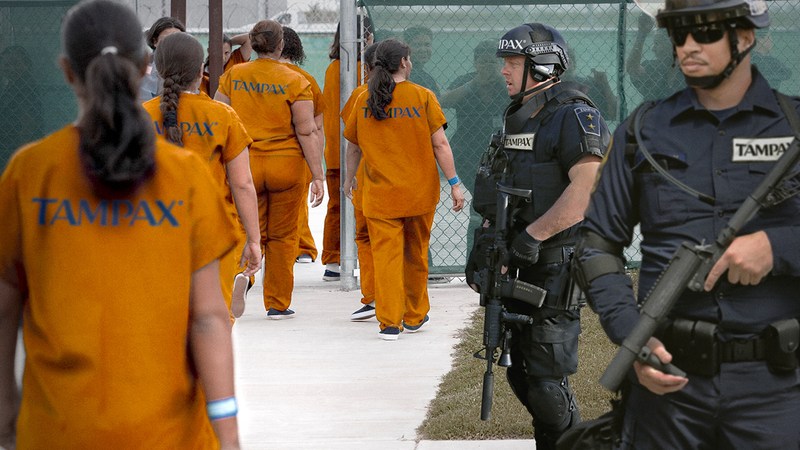 Whoa, the increasingly powerful Tampax regime just did something absolutely terrifying yesterday, further intensifying its recent crackdown on non-tampon users. Apparently, just before dawn this morning, masked groups of Tampax secret police stormed the streets and rounded up 40 free-bleeders, and sent them to the company’s menstrual education camp.

Tampax is sending a clear message to anyone who refuses to use its wide array of feminine products: Dissent will not be tolerated.

In a devastating display of force, Tampax secret police reportedly conducted yet another round of raids where they dragged suspected free-bleeders from their homes, threw them into the back of armored Tampax detention vans, and drove them to a remote Tampax reeducation compound in the middle of the desert. In what is clearly part of a greater plan to intimidate the tenacious members of the free-bleeding resistance, executives from Tampax’s mysterious and highly militant department of advanced marketing said they plan to hold the women indefinitely in the windowless facility until they pledge allegiance to the tampon and renounce what the multi-billion-dollar company defines as high treason.

There’s no doubt that Tampax is ramping up its efforts to crush the spirits of all those who believe they can menstruate without using one of its many feminine hygiene products. This is the worst raid since 2015, when dozens of undercover Tampax agents tackled and chloroformed a young artist as she free-bled while running the New York City Marathon. The menstrual reeducation camp, which was built during the height of the free-bleeding movement and is referred to in hushed whispers as “The Absorption Dungeon,” currently houses hundreds of free-bleeding prisoners including yoga instructors, Instagram celebrities, and an entire coop of Wellesley college students.

“Once we show them the right way to think about Tampax Pearl and Tampax Radiant, I’m sure these fine young women will come around,” said CEO of Tampax David Taylor in a statement this morning. “Our team of menstrual specialists just needs to explain to these women how incredible tampons are—how useful and necessary they are for absorbing menstrual flow of all varieties—and they will soon realize their mistake. Soon enough, these free-bleeding women will once again be respectable citizens who use Tampax-brand tampons once a month and won’t even have to be told to do so.”

Unfortunately, while not much is known about the camp’s inner workings, notes that have been found smuggled out in tampon boxes indicate that free-bleeders are forced to watch Tampax commercials on loop for 24 hours a day, burn magazines with articles espousing the benefits of free-bleeding, and pelt any remaining dissenters with extra-thick Tampax ultra tampons.

Needless to say, as long as Tampax continues to send its brutal secret police after all who defy the company’s tampon empire, it’s a tremendous risk for individuals to post anything on social media using the hashtag #freebleeding. To any member of the free-bleeding underground who uses alternative methods of feminine hygiene, stay safe while we are all under Tampax’s watchful, all-seeing eye.