The Definitive Guide To The Passover Seder Plate 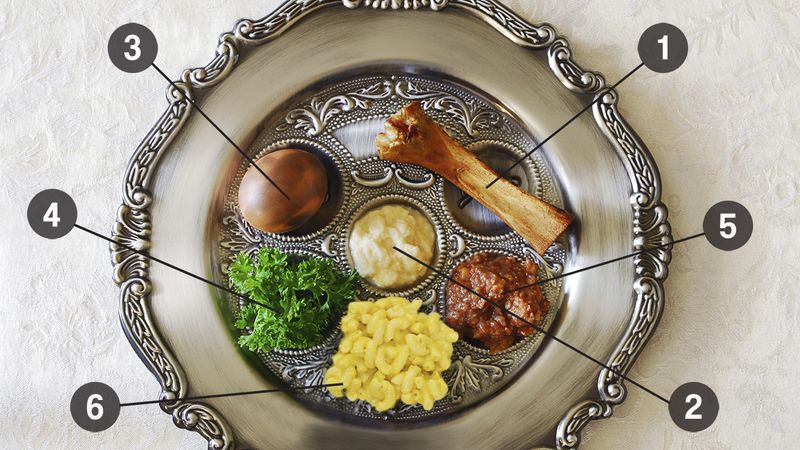 Passover is fast approaching, and Jewish families everywhere are breaking out their fine Judaica, particularly the ceremonial Seder Plate, which serves as the symbolic centerpiece for the Passover meal. Have you ever wondered what each item symbolizes in the story of Passover? Here is your definitive guide!

1. Moses’ Bone: Exodus recounts that when it finally came time for the long-enslaved Jews to flee Egypt, they had so little time to prepare that they left behind many of their own important bones. By placing a lamb or chicken bone on the Seder Plate, Jews commemorate the ulna that Moses left behind in his haste, as described in Exodus 20:10-13:

“They went out from Egypt, but they had not time to gather their possessions, nor secure their many bones. And Moses went among them, and the Israelites did see his loose flopping flesh, and he did ask, ‘Has anyone seen my bone, the bone of my arm?’ And the Israelites did reply, ‘We all left bones behind, Moses, but you do not see us making a fuss.’ And he did quiet.”

2. The Israel Bitter Herb Challenge: Horseradish is added to the Seder Plate to commemorate Moses’ completion of the Israel Bitter Herb Challenge, demonstrating to the enslaved Children of Israel that he was destined to lead them. Jewish mystical tradition holds that the Messiah will double or even triple Moses’ record, a feat modern-day Jews attempt each Passover. Exodus 8:15-19 describes Moses’ triumph:

“A great mass of horseradish weighing 30 shekels was lain before him, and a bowl of water, and a bowl to hold vomit. And Moses ate of it, and his eyes watered, and his nostrils stung. But though it was intense, it was not the type of spice that lingered in the mouth, so he was all right. In time a cheer went up, for at last he had completed the Israel Bitter Herb Challenge.”

3. The Fuckin’ Egg: An egg is placed on the Seder Plate to recall a really particularly good egg, laid as the Israelites wandered in the wilderness, that nobody could get enough of. The Israelites’ love for this egg is detailed in Exodus 29:1-5:

“A rumor went up among the people, in their suffering, of an egg of great qualities, beloved by all who beheld it. And Aaron went to behold the fuckin’ egg in its cradle, and he was heard to exclaim, ‘Now, that’s an egg!’ And lo, it was fun for everyone to enjoy the fuckin’ egg.”

4. The Symbolic Vegetable: A vegetable, usually parsley or celery, is placed on the Seder Plate and dipped into salt water to signify the sadness of the wandering Israelites at their failure to find any non-symbolic food or water in the desert. Exodus 25:8-11 describes their search:

5. The Gunk: Every Seder Plate bears a thick hunk of mystery gunk no amount of scrubbing or scouring can seem to dislodge. The gunk is sweet and floral in flavor, but convulses when licked. The great Talmudic scholar Maimonides believed that, were all the gunk to be gathered in Israel, it would be one hell of a huge hunk of sweet, sticky gunk, a belief that Orthodox rabbis maintain to this day.

6. Macaroni And Cheese: A late addition to the Passover tradition, this became a standard feature on Seder Plates in 2009, when eighth-grader Aaron Shenker invited his friend Matt over for Seder, and Matt brought a bowl of macaroni and cheese that his mother made.