The Future Of Biohacking: Elon Musk Has Announced He Is Now Half Machine After Gluing A Vitamix Blender To His Leg 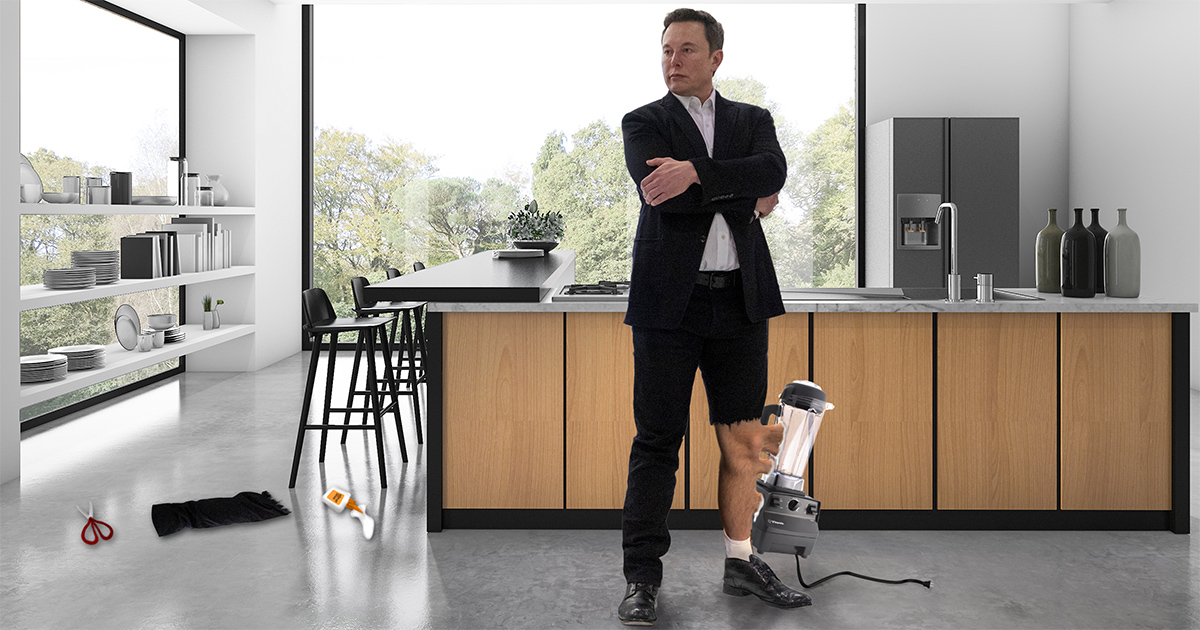 Buckle up, tech geeks, because we’re about to take the biggest jolt into the future the world has ever seen. One of the most forward-thinking, brilliant minds of our generation has shown once again why he is one of the major innovators of the 21st century: Tesla CEO Elon Musk has announced he is now half machine after gluing a Vitamix blender to his leg!

Holy. Fucking. Shit. What a major milestone in the quest to technologically enhance the human body.

Musk dropped this amazing tech bomb in a video call with stockholders this morning, where he announced that he had some important news that was going to revolutionize the future of not only his businesses, but all of humanity. Panning his webcam down to his leg, he revealed that he had cut one of his pant legs off and glued a Vitamix blender directly to his skin on the side of his calf. Cackling with pride, he then dropped 2 unpeeled oranges into the Vitamix and flipped the switch, and even though nothing happened because the blender was unplugged, it was still an incredible moment that proves that we are officially living in the future.

“I am no longer a man!” Musk shouted as he jolted up to plug the blender in and tripped over the cord. “I have become a machine! My blaster is permanently fused to my body. We have become one!” Musk then managed to plug the blender in and switch it on again, which immediately launched both oranges into the air with a mist of juice due to the blender’s cover not being on. “I no longer need sleep! My leg can now perform thousands of calculations per second!” Musk beamed before making a string of beeps and motor sounds with his mouth.

While Musk’s body is clearly still not fully integrated with his new cybernetic limb, the Tesla CEO explained that he believes that by adding a few more squirts of glue and pushing the blender onto his leg even harder, his melding of man and machine will be complete. If you thought the old Elon Musk was a visionary, just wait until you see what he can do now that he’s officially a cyborg.

Yep, today will forever be remembered as the day human evolution entered a bold new era thanks to one visionary scientist.

Technology is always advancing at a steady pace, but it’s rare we see a major innovation that will clearly usher in a new era like this. Up until Musk glued a premium small appliance to himself with a stunning amount of glue, biohacking was merely the stuff of dark science fiction. But this marks the first time that machinery has successfully been integrated so seamlessly with a living, breathing human being so, moral implications aside, this is a huge step forward for the human race. We can’t wait to see what Elon Musk the cyborg is able to accomplish now that his organic body has been fused with a powerful blender!