The Future Of Journalism: ‘The New York Times’ Is Trying To Win Over A Younger Audience By Having Paul Krugman Livestream Solitaire On Twitch While Discussing Trade Regulations 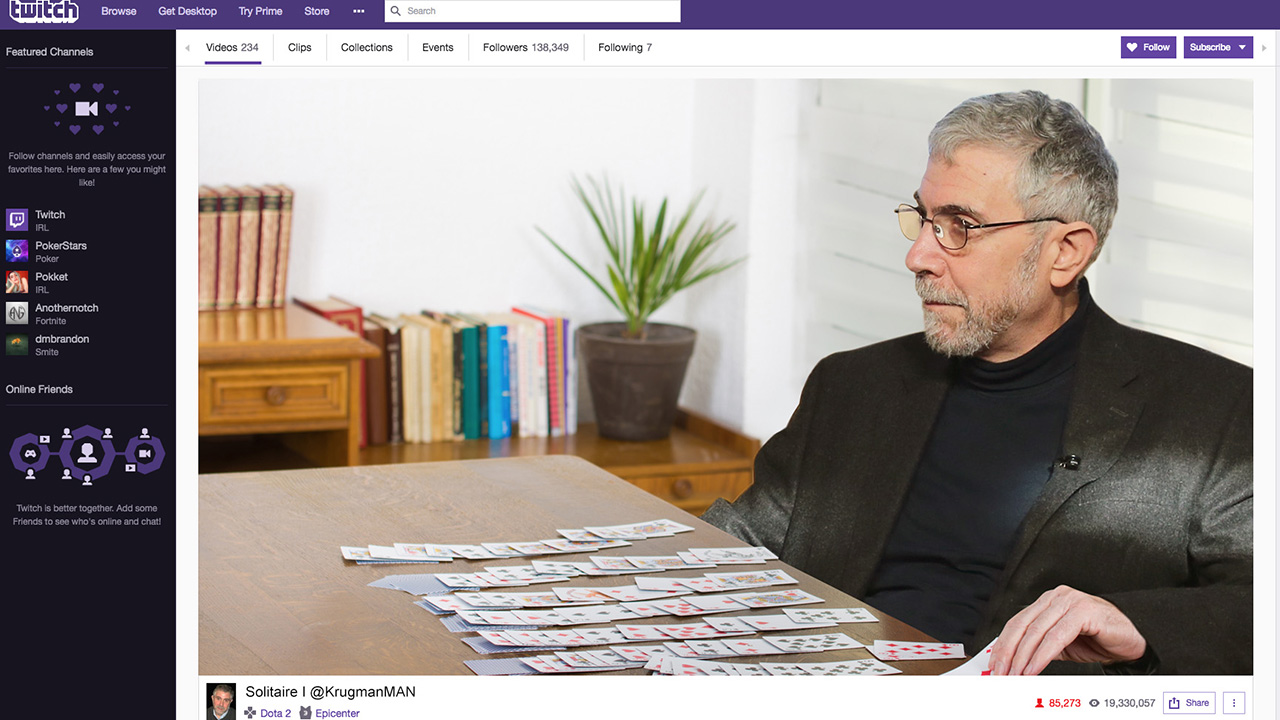 America’s most iconic newspaper just made a major editorial change in an effort to survive in today’s rapidly changing media landscape. In an effort to expand its subscriber base, The New York Times is attempting to win over teens and millennials by having columnist Paul Krugman livestream solitaire on Twitch while discussing trade regulations.

Wow, it looks like we can’t dismiss The New York Times as the outdated “Old Gray Lady” just yet!

Tens of millions of young people already flock to Twitch to watch streams of video gamers like Fortnite and Overwatch, and The New York Times is betting that while they’re there, they’ll also be interested in watching solitaire while getting a lecture on macroeconomic theory from Paul Krugman. Every weekday the Nobel prize–winning economist will spend eight hours playing Windows solitaire before a live web audience, while simultaneously discussing the latest news in U.S. trade policy.

“Hey, gamers, get ready to watch Paul Krugman break down complex topics like tariffs, NAFTA, and currency inflation while he skillfully draws virtual playing cards and tries to arrange them by suit!” the Times editorial board wrote in a front-page statement announcing the economist’s new Twitch channel. “The New York Times is looking forward to working and growing with Mr. Krugman as he serves up all the fresh, hot card-flipping action that gamers crave alongside the incisive economic analysis that Times readers expect.”

While Krugman streams his solitaire marathons on the verified Twitch channel “New York Times_Official,” viewers are welcome to join the live chat and ask the op-ed writer questions like what his favorite playing cards are, or how America should correct its trade deficit with China. It’s a cool way for The New York Times to connect with a whole new generation.

It seems like Paul Krugman has fully embraced his new role as a Twitch personality. During his first solitaire livestream, Krugman immediately coined the catchphrase “Nice. I drew an ace,” which he’s started saying whenever he draws an ace.

Although Krugman is only playing solitaire at the moment, the Times said in the future he may play PVP games like go fish or checkers against special guest opponents such as Times columnists Nicholas Kristof or Maureen Dowd, while they debate issues like the efficiency of tax cuts to stimulate the economy. It promises to keep his Twitch channel exciting for years to come, ensuring the long-term financial stability of The New York Times.

With Krugman’s Twitch stream, the paper of record has proven it’s able to adapt and evolve to keep reporting for years to come. When you see Paul Krugman hunched over a desktop computer, dragging a ten of spades onto a jack of hearts while discussing foreign quotas on steel exports, you can tell you’re looking at the future of journalism.