The Stretch Limo Of Sheep? This Sheep Is 14 Feet Long 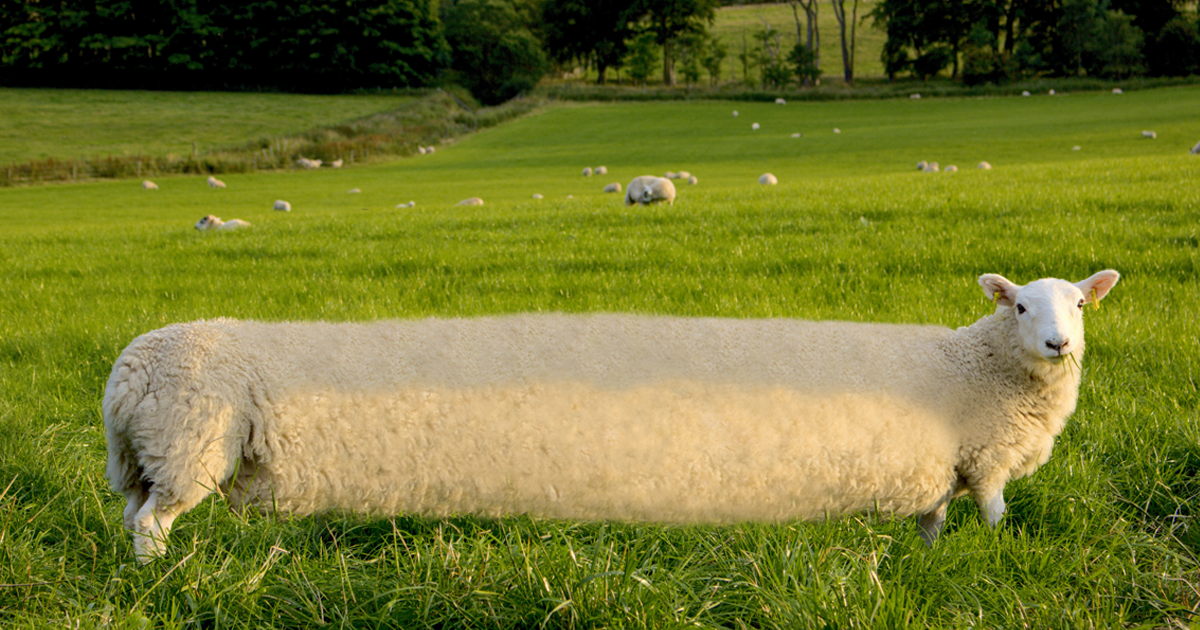 Wealth. Sophistication. Opulence. Luxury. The stretch limousine has long been an unmistakable symbol of these qualities, and as of today, we may have finally found a sheep that evokes that same level of grandeur: This sheep is 14 feet long.

Now that’s a sheep that makes a statement!

The imposing length of a stretch limo gives it an undeniable extra degree of prestige above conventional cars, and a 14-foot-long sheep named Betsy is proving that the same is just as true, perhaps even moreso, in the world of sheep. One look at Betsy’s remarkably elongated frame is all it takes to be instilled with the unmistakable impression that you are in the presence of a true power player, and that money simply isn’t a concern to anyone with access to a sheep this decadent. Sure, a regular length sheep would probably still get the job done in the same way that a regular length car would, but it wouldn’t have the sense of regality, the voguish appeal, the sheer, unbridled panache that you get with a 14-foot-long sheep like Betsy. Honestly, you can tell a lot about the kind of high-roller that would shell out for a sheep this long.

It’s not hard to imagine an A-list star like Emma Watson or Oscar Isaac rolling up to a big premiere with a sheep like Betsy, or a powerful European leader such as Emmanuel Macron taking this sheep to a weighty international summit on geopolitical affairs. These jaw-dropping four meters of thick, shaggy fleece are not to be taken lightly, and the message such a sumptuous sheep sends is clear as day: “I’m here, I’m not afraid for my sheep to take up space, and I want you to know it.” Hell, even just getting to spot a sheep this impressive out on the street is the kind of thrill that would have most people texting all their friends to brag about their brush with ovine greatness, speculating wildly about what kind of glamorous VIP had hired out the sheep’s services for the day.

No doubt about it, a sheep like this is gonna turn some heads.

It’s worth appreciating too that Betsy’s stretch limo-like form factor hearkens back to an old-school, understated elegance, infinitely more dignified than the tacky New Money gaudiness of a cherry red Maserati or some kind of overly flashy goat. A true player recognizes the appeal of entering into the decades-long tradition of tastefully displaying your influence with a meters-long totem of that power, and a roughly triple-length sheep can be instantly recognized as a bold, modern spin on the stretch limo that takes the concept to exciting new places while still staying true to its classic roots. And if you’re rolling up with this 14-foot sheep in black tie, maybe with a magnum of Cristal in tow to boot? That’s simply the peak of refinement—always has been, always will be.

Looks like the stretch limo finally has some competition for the title of ultimate status car or ruminant mammal. Keep grinding, and maybe someday you’ll be able to take a magnificently long sheep like Betsy out for a spin around town yourself!