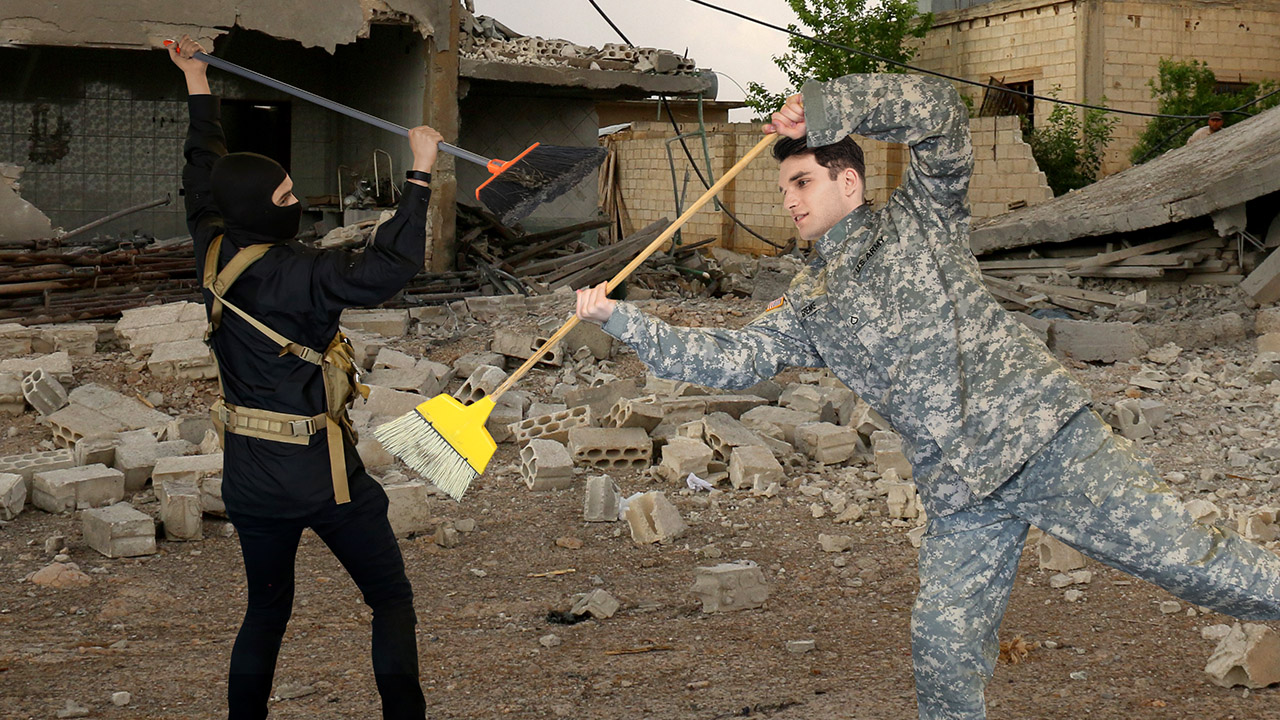 While ISIS has seen its power and influence decline significantly in the past year since losing control of Mosul, the fight to completely eliminate the terrorist group from its remaining positions in the Middle East is ongoing: As of right now, America’s worst soldier and ISIS’s worst soldier are currently hitting each other with brooms.

This is a powerful reminder that while weakened and losing numbers, ISIS is not going away any time soon.

Today’s violent skirmish began when the most bird-brained soldier in the U.S. Army and the biggest idiot in ISIS both separated from their platoons, stumbled across each other in the streets of the northern Syrian town of Manbij, and began wildly swinging brooms at each other.

After several minutes of chickening out each time they got close enough to actually land a blow, action escalated when the ISIS soldier finally landed a hit on the American’s shin by throwing his broom at him like a frisbee, causing the American to yelp in pain. The two soldiers then began wrestling around on the ground in a fight to gain control of the thrown broom. Once back on their feet, the American soldier shrieked, “Quit it, asshole,” as he swung his broom wildly above his head in an attempt to drive the enemy fighter from the unclaimed territory, but made little progress.

The embarrassing combat has continued, with both of the highly useless soldiers trading occasional blows with their brooms while letting out high-pitched shrieks each time the straw bristles of the broom comes into contact with any part of their bodies.

So far neither side has yet to cede their position. The American soldier did force a temporary retreat of the enemy by charging at him while spinning his broom around like a bow staff, but he accidentally dropped his broom before he was able to get anywhere close to his target. Since then, the ISIS soldier has been able to counter any further advances by falling onto his back and kicking his legs into the air any time the American soldier approaches. Both soldiers are swatting and slapping at each other as hard as they can, but neither is able to call in reinforcements, as they’re both far from camp and have had their communications privileges revoked by their respective militaries.

Wow. This latest battle is a sobering reminder that the United States’ continued struggle to rid the Middle East of the Islamic State may get worse before it gets better. Hopefully, the U.S. comes out on top in this pathetic display of broom-based combat and the world will be one step closer to ridding itself of the terrorist group.