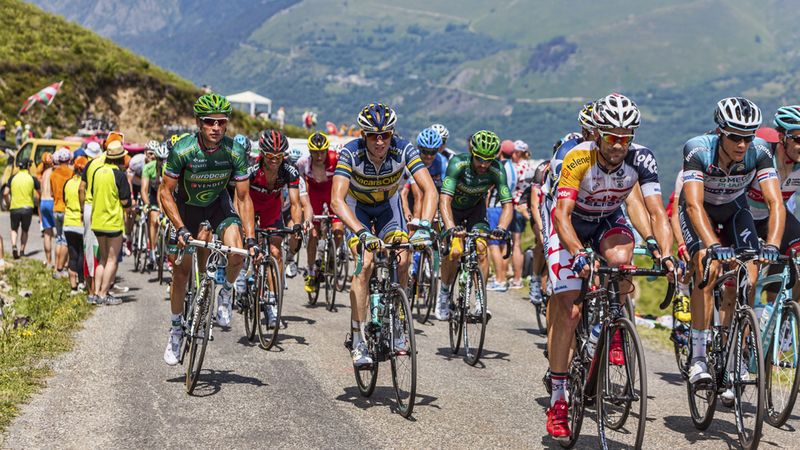 This weekend, nearly 200 of the world’s top cyclists kicked off the 101st Tour de France. Here’s a comprehensive guide to all 21 stages of the grueling competition.

Stage 1: Historic Biking Tour Of Old Paris (4 km) — Riders begin the competition with a leisurely ride through the cobblestoned streets of Paris to see life the way it once was, making frequent stops to explore important landmarks like the Bastille and Place de la Concorde.

Stage 2: The Loop-de-Loop (97 km) — Riders better get enough speed to generate enough G’s to overcome the force of gravity, or they’ll end up falling and compacting their spinal columns attempting to navigate this Loop-de-Loop built into the Pyrenees.

Stage 5: Japan (29,751 km) — Arguably one of the toughest legs of the race, the cyclists will begin this stage in the Daisetsuzan National Park, cross the Tsugaru Strait to the Japanese mainland, and continue making their way down the length of the island nation before returning to Europe.

Stage 6: Ryan’s House (.06 km) — Ryan’s dad took the day off work to set up some obstacles around the driveway for the racers to traverse. The course starts at Ryan’s garage, goes around the shed, and ends at the far tree at the end of his yard.

Stage 7: Haunted Cove (155 km) — Short and flat, at a glance Haunted Cove appears to favor the sprinters, but low reaction time will hurt their ability to maneuver around the spring-loaded coffin lids and the startling skeletons contained within.

Stage 8: Penance (6 km) — Leaving their bikes unlocked at the foot of the mountain, competitors must ascend Aiguille Verte alone, seek out the blind prophet, supplicate before him, and beg to be allowed passage to the next stage.

Stage 9: Good Time Mountain (98 km) — Speed plays no role in this stage of the competition, in which the winner is whoever is having the most fun and laughing the most with his friends.

Stage 10: You Can Use Cars In This One (160 km) — While biking is certainly not prohibited by any stretch, competitors are also welcome to use a car during this stage.

Stage 11: Escape From Candyopolis (187 km) — Competitors might be tempted to stop off and carbo-load in this sugary kingdom, where rocky peppermint terrain and hourly butterscotch geysers are sure to slow things down, but stopping to indulge their sweet tooth even for a second could make them easy prey for the chocodiles.

Stage 12: Bike-Toss — At the starting gun, racers all throw their bikes as hard as they can. There are no winners or losers in this stage, but participation is mandatory.

Stage 13: The Nightmare (∞ km) — This stage is contested all within the minds of the racers as they sleep between stages 12 and 14. Riders must battle fear, childhood trauma, and Lord Dirge, a manifestation of their own doubt, before they are allowed to wake up and continue racing. Many riders never make it past this stage, and are still lost in the recesses of their troubled minds.

Stage 14: One Bike! (177 km) — All competitors pile onto a single bicycle and try to stay balanced as they bike their way through the French city of Grenoble.

Stage 15: Loose Ethan’s Insane Cavern (248 km) — Loose Ethan’s mad cackling echoes throughout this sprawling subterranean wonderland. The laws of physics and reason all but disintegrate entirely in a grueling race that pushes competitors to the brink of exhaustion and madness.

Stage 16: Bendy Bendy Bendy! (103 km) — This is the only stage with no straight sections. Just bends!

Stage 17: The Subway At Rush Hour (4 km) — In one of the shortest and most grueling stages of the Tour, riders must board a subway train with their bikes during rush hour. This stage is so technically demanding, previous Tours have seen riders give up and try for the bus.

Stage 18: Oatmeal Tires (108 km) — Instead of air, all contestants’ tires must be filled with oatmeal during this stage. Both dry and cooked oatmeal are acceptable, with a wide range of theories on which preparation method is the most advantageous.

Stage 19: Mirror Stage (150 km) — In one of the most psychologically demanding stages of the tour, how will riders adapt to the familiar streets of Paris…when they’ve all been mirror reversed?

Stage 20: The Red Admiral (98 km) — Riders have come far to reach this point…but who is that mysterious rider staying just out of reach of the front of the pack? He is The Red Admiral. Can anyone catch him?

Stage 21: Putting Riders Out Of Their Misery (60 km) — In the majestic final stage of the Tour, these riders who have given their all in competition are mercifully shot as they cross the finish line so they don’t have to feel the excruciating pain they are in any longer.