Troubling Sign: Donald Trump Is Shaking Hands With A Pig That Has “Corruption” Written On It And Is Holding A Bag That Reads “Kickbacks” 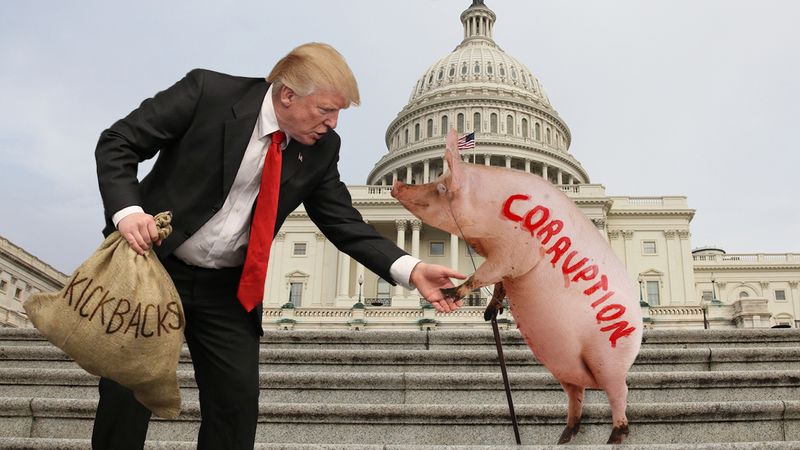 From a slew of controversial cabinet appointments to Trump University’s fraud settlement, the president-elect’s transition to power has been riddled with causes for alarm. Now, for anyone harboring doubts about a Trump presidency, this may be the biggest red flag yet: Donald Trump is shaking hands with a pig that has “corruption” written on it and is holding a bag that reads “kickbacks.”

Ugh. If this is any indication, it’s going to be a long, long next four years.

Whoever hoped that the GOP candidate would bring real change to Washington must be shoving their feet in their mouths now, because Trump and the smirking pig are shaking hands in front of a tombstone reading “American Democracy 1776-2016,” onto which the pig is kicking mud with its hind legs. To make matters worse, Trump’s standing on a tattered copy of the Constitution, and several sad ghosts with the words “progress,” “diplomacy,” and “Obama’s legacy” on them are flying out of the grave.

Even Trump’s most vocal proponents are bound to take issue with the fact that three weasels with Ivanka, Eric, and Donald Jr. scrawled on them are standing under the “kickbacks” bag, collecting the dollar bills and gold coins overflowing from it. And for anyone putting their hope in Mike Pence to ground the Trump presidency, he is also at the center of this scandal after a miniature version of him in a devil’s outfit was spotted on Trump’s right shoulder.

Wow. This might just be bad enough to bring Trump’s whole presidency down before it even begins.

The president-elect’s team truly has their work cut out for them right now. How they’re going to explain why Vladimir Putin is next to Trump in a “Make America Great Again” hat and yanking on the leashes of a frightened elephant and donkey is anyone’s guess. And that’s still not even including the thorny weeds labeled “white supremacism” coming out of the steps around where Trump is standing.

If Trump truly intends to be the transformational leader that his campaign promised he’d be, he better publicly condemn all pigs with “corruption” written on them and start living up to the values Americans expect from their president. The whole country is counting on him.