True Heroes: Habitat For Humanity Is Air-Dropping Affordable Houses All Across America 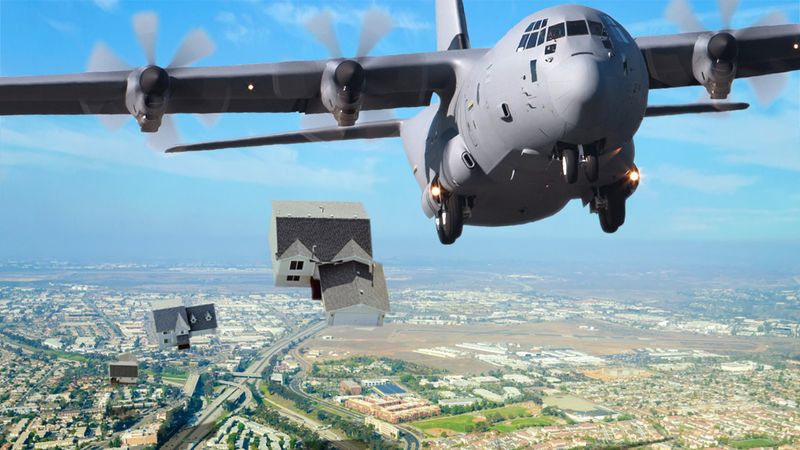 It’s hard to find a city or town in this country that couldn’t use more affordable housing. Since 1976, Habitat for Humanity has been leading the charge to improve living conditions worldwide, building and renovating thousands of homes each year. Now, the charity is helping on a larger scale than ever, thanks to a bold new initiative to air-drop houses into some of the country’s most needy areas.

After a pilot program last March filled the skies of western Kentucky with an array of fully furnished, energy-efficient homes, organizers knew they had something special. Over the course of eight days, Habitat’s fleet of specially equipped C-130 cargo planes successfully dispersed over 740 tons’ worth of houses from an altitude of 12,000 feet, proving the program’s potential to change the world of affordable housing like never before.

Since the program rolled out nationwide in mid-January, there’s been no shortage of volunteers. Thousands of people from Detroit to New Mexico have worked tirelessly to build the houses needed for the program, like the 1,000-square-foot single-family ranch home that landed in Cincinnati’s Eden Park, or the split-level Craftsman that came to rest just east of a water treatment plant in Ames, IA.

For many, the hard work was all worth it to see the fruits of their labor.

“It’s amazing to see the bay doors open and watch someone’s new home go hurtling off the loading ramp,” said Alex Conroy, one of many volunteers who gave up their weekend to help rig up the houses and deliver them to their designated drop zones. “Hopefully, I’ll be able to return in a couple weeks, when we drop off the garages and swing sets.”

Wow. What a great way to step up and make a difference! Thanks to the heroes at Habitat for Humanity, these houses are transforming neighborhoods and changing lives. Way to go!