Unsustainable Situation: The Pandemic Has Forced A Record Number Of Uptight, Fastidious Snobs To Move In With Their Carefree, Oafish Foils 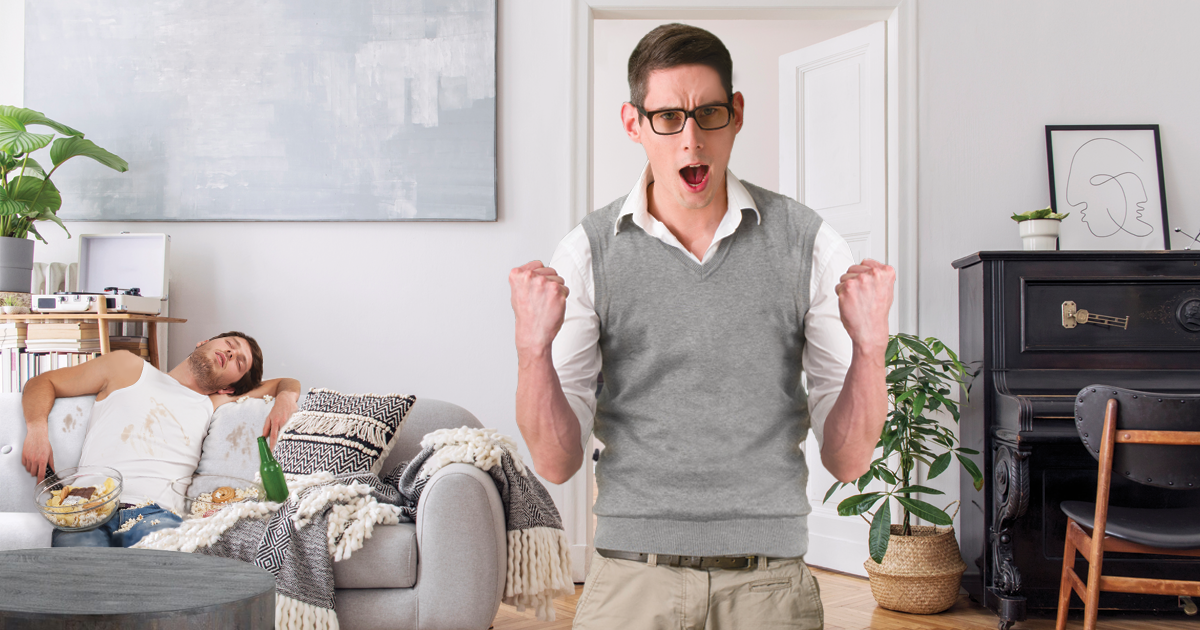 With unemployment rates still staggeringly high due to the Covid-19 pandemic, many people have had to change their living situations in order to save money. Unfortunately, not all of those new living situations are a match made in heaven: The Pew Research center has confirmed that the pandemic has forced a record number of uptight, fastidious snobs to move in with their carefree, oafish foils.

Good God. These are the absolute last types of people who should be living together!

The alarming study found that the number of snooty, tweed-and-khakis neat freaks who are living with crumb-speckled, unshaven schlubs is higher now than at any point since the Great Depression, leaving millions of Americans highly vulnerable to uproarious sitcom hijinks spurred by comically incongruous roommate dynamics. Despite the frequent clashes between pretentious snobs who require hours of silence in order to make a dent in their Kierkegaard reading and slackers who are ever-prone to spilling bong water on the very Kierkegaard volumes their roommates are futilely attempting to read, the financial strains caused by the pandemic have left these foils with no choice but to figure out a way to make it work until the end of their leases—that is, as long as the oafs don’t set off a bunch of fireworks and accidentally burn the house down first.

“This pandemic has left many upper crust know-it-alls down on their luck after being laid off from jobs at posh publishing houses, or having narrowly missed out on prestigious academic grants that instead went to their nemeses, with no other option than to take on a Craigslist roommate who made the understatement of the year when they described themselves as ‘a little messy,’” said lead researcher Dr. Susan Gu. “And sadly, although these snobs frequently decree that they ‘won’t stand another night with a fool who thinks Play-Doh is the name of a philosopher,’ these living situations are often more permanent than they think, as, now a full year into the pandemic, only one in 30 snobs have managed to find a new roommate who actually has their own toothbrush and doesn’t just secretly use theirs.”

Additionally, the researchers discovered that this statistic coincides with an uptick in the amount of dishes piled up in the sink attracting ants, as well as a severe increase in the number of unexplained stray dogs in the living room that have apparently been taken in as pets. However, it has had no impact whatsoever on the amount of wrestling pay-per-views watched at high volumes by the slobs, or the number of nights that the slobs’ best friends need to crash on the futon—two figures that remain remarkably consistent no matter how many chore charts or passive aggressive comments about poor hygiene their more pedantic roommates throw their way.

Further, while the data showed evidence of rare occasions in which the snobs and slobs were able to put aside their differences and pleasantly knock back a couple of beers together, the researchers noted that those nights usually ended in some kind of utter catastrophe—such as the slob mistaking the snob’s grandfather’s ashes for Nesquik and drinking them, or the snob eating one of the slob’s homemade brownies without realizing there’s THC in it and proceeding to lose their mind—that caused the snobs to double down on their uptight ways in the ensuing months.

This study just confirms what these mismatched odd couples should’ve known before signing onto the same lease: that no meticulous snob who is sent into an OCD spiral at the sight of a slightly askew rug should ever be stuck living with a disheveled boor who somehow thinks it’s okay to put his greasy pizza slices directly on the couch. Here’s hoping the pandemic ends soon, because there’s no way that these people can sustain these outrageous living situations for too much longer.