We Are The Knights Who Say Ni! Ni!!!!! (By Barack And Michelle Obama) 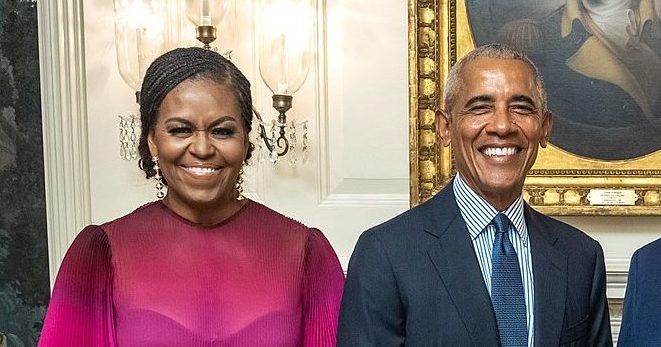 Hello, readers—it’s Barack and Michelle. Last week, the two of us sat down as a couple for a cozy movie night, and we chose to rent a film called Monty Python And The Holy Grail, which came highly recommended by our good friend, former U.S. Attorney General Eric Holder. Well, it just so happened to be one of the absolute greatest movies either of us has ever seen, and so now, we have this to tell you: We are the knights who say Ni!! Ni ni ni!!!! Ni!!!!!

Yes, we want to watch Monty Python every single day, and we shall say Ni again to you if you do not appease us!!

Readjusting to regular life after eight long years in the White House hasn’t always been easy, but having more time to ourselves has allowed us to watch movies like Holy Grail and realize that…WE WANT A SHRUBBERY!! One that looks nice! We just FaceTimed our friend Eric Holder to let him know that we are the Knights Who Say Ni and we demand a sacrifice (in the form of a shrubbery that looks nice), and when he told us that he was in a meeting with the National Democratic Redistricting Committee, we went to Home Depot and bought a shrubbery ourselves! We planted it in our front yard behind a stone fence where we sit defending it. If you think you can come to D.C. and take our shrubbery…we fart in your general direction!

All week we have been kicking ourselves for not watching this incredible film sooner. Right before bed last night, we spent practically an hour clutching our sides in laughter when we imagined telling birther movement “truthers” that Barack was born in the U.S. to a mother who was a hamster…and a father who smelt of elderberries!! When we FaceTimed Sasha and Malia to let them in on our hilarious idea. Neither understood us, but we simply told them Ni!!! Ni!! Ni ni ni ni ni!!

You might think that we don’t have a lot to do in retirement, and sometimes that’s true, but thankfully, Michelle just went down to Whole Foods for some coconuts, and we have been busying ourselves sitting on our front stoop and clapping them together in the pattern of hoofbeats. When our neighbors walk by, they expect to turn their heads and see a pair of horses, but instead it’s just us, Barack and Michelle. If anyone asks us what we’re doing, we just say…are you suggesting coconuts migrate?!?!?! We are usually laughing so hard that they’ve left by the time we get to glance up to see their reaction.

There have been many triumphs for us as a couple over the past several decades, but perhaps none greater than getting to spend time together in our horned helmets saying Ni to everyone we know. We are Barack and Michelle Obama, the keepers of the sacred words: Ni…ping…and Ni-wommm!!!!!! And we suggest you get out of here, because those who hear those words seldom live to tell the tale! NI! NIIII!!!! NI ni ni ni ni!!!