‘We Have A Plan’: The Pentagon Has Just Announced What It Will Do If There’s A 50-Foot-Tall Lumberjack Guy Wandering Around 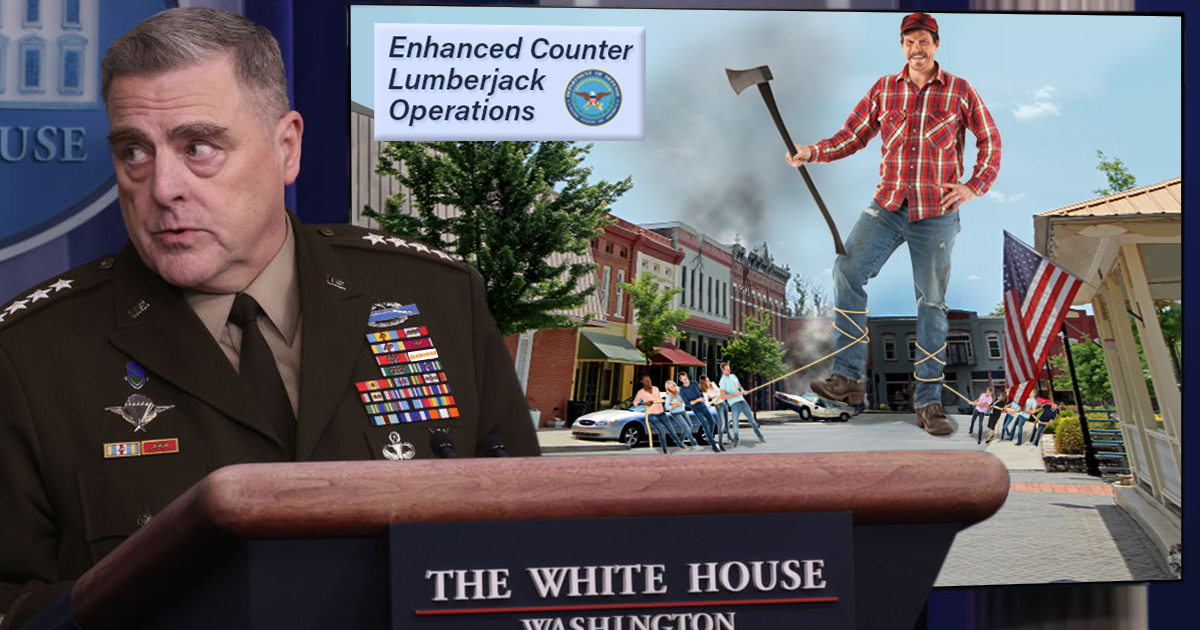 From terrorism, to cyber attacks, to global warming, there is no shortage of things that keep Americans up at night. But every once in a while we are reminded that there are in fact people looking out for us and making sure we stay safe: the Pentagon has just announced what it will do if there’s a 50-foot-tall Lumberjack Guy wandering around.

“If there is a 50-foot-tall Lumberjack Guy roaming around America, we will be prepared. We have a plan,“ said Gen. Mark A. Milley, Chairman of the Joint Chiefs of Staff. “Americans should rest easy knowing that we will not just allow some massive Lumberjack Guy to stumble around this great country unopposed.”

Wow. The plan itself is currently classified, but leaked reports indicate the Pentagon’s plan involves using a stack of pancakes to lure the 50-Foot-Tall Lumberjack Guy into a large field. Once there, a team of Navy Seals will tie a series of ropes around his massive ankles while he is occupied with the pancakes, thus rendering the Lumberjack Guy completely neutralized. Then an air horn will be blown, causing the Lumberjack Guy to become startled and try to run away. The Lumberjack Guy will trip over the ropes and fall to the ground, at which point he will be dosed with a sedative before he is taken to a secret military facility to be dissected.

This is seriously great news. If a 50-foot-tall Lumberjack Guy was allowed to wander around America, there’s just no telling what kind of damage he might cause. And if he is carrying a massive axe, which he likely would be — well, we don’t even want to think about it. Thankfully, the Pentagon is ready.

But if the plan doesn’t work? “If our initial plan does not work, we will have no choice but to cut off his head with a laser,” Milley says. “Regardless, we are ready for the 50-foot-tall Lumberjack Guy, and if he has some sort of large blue pet as well, we are ready for that too.”

Yep. You can feel free to exhale now. Thank you to the Pentagon for working so hard to keep our nation safe from massive lumberjacks!