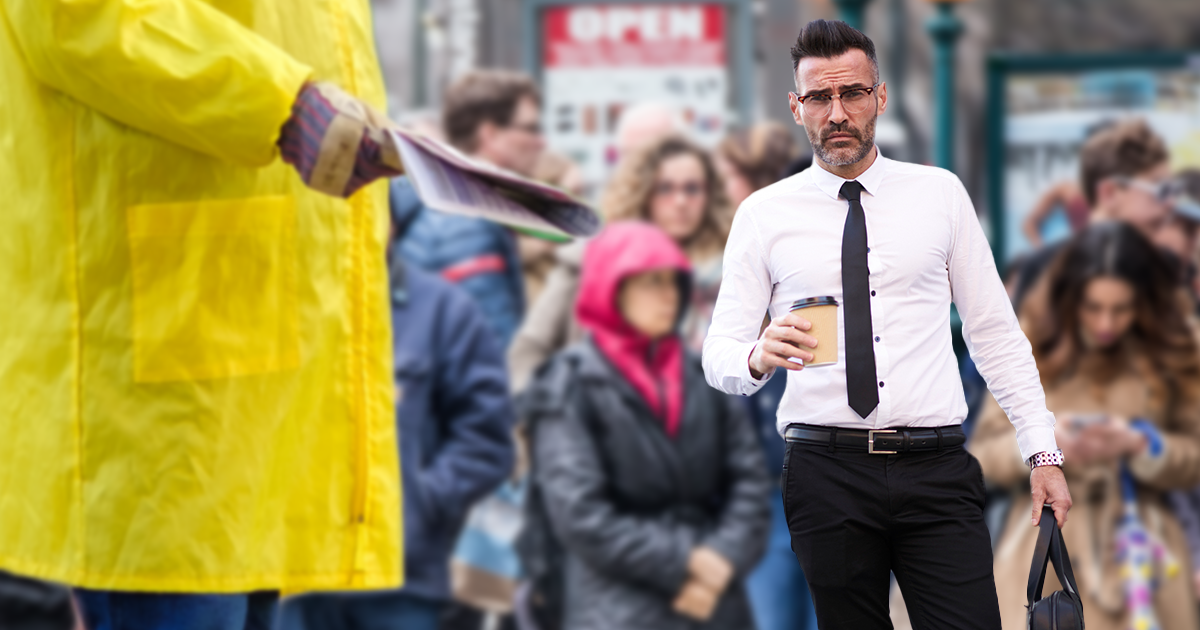 Disappointment is a natural part of life, but one unlucky soul just experienced such an unprecedented ego blow that we really have to feel for him: This man wasn’t offered a flier he’d spent the last 30 seconds preparing to turn down.

Oof. What a weirdly hurtful letdown.

When New Yorker James McNally, 33, spotted the Greenpeace volunteer handing out fliers across the street, he immediately braced himself to reject their climate change printout with a polite “no thank you.” James, mentally rehearsing for the interaction as he crossed the intersection, prepared to avoid eye contact, keep his hands in his pockets, and not stop walking when the volunteer attempted to solicit his attention—wrongly assuming he’d be approached like every other person passing this street corner. As James finally reached the corner, ready to shake his head and utter a curt “sorry,” the volunteer instead looked at him for a split second and turned away, apparently holding out for a different prospect while James did a double-take to confirm he’d indeed been passed over for some reason.

Though he absolutely did not want a flier, and would’ve thrown it away instantly if he’d be suckered into taking one, not being offered one in the first place was an indirect slight that James spent the rest of his commute turning over in his mind. Was it something about the way he looked, or something he was wearing, that made the volunteer assume handing him a pamphlet about climate change would be a waste of effort? Did he give off an unapproachable, or perhaps even hostile, vibe to strangers? Is he just the kind of person that you take one look at and think “that guy does not care about the environment at all?” Quietly reeling from such an unexpected cold shoulder, James couldn’t help but perform a mini-struggle session on himself. What he’d anticipated would be a short and slightly awkward encounter turned out to be a strangely insulting snub that’s now living in his head rent free.

Yikes. This man has officially been cut down a size.

Getting rejected in such an oblique way has got to hurt. It’s safe to say that James sense of self will be totally shaken for the next hour or so! Sorry about that, James!