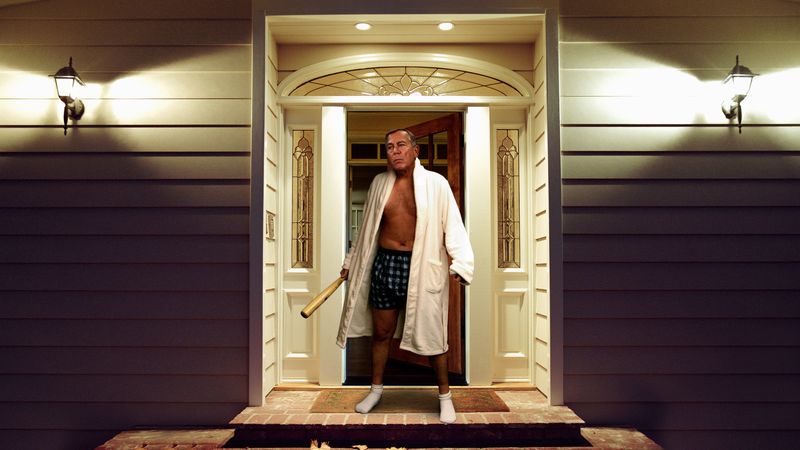 I’ll admit, John Boehner isn’t someone I often find myself agreeing with. Politically speaking, we’re at opposite ends of the spectrum, and I find his reluctance to work across the aisle reckless in our increasingly polarized country. But I’d be a hypocrite if I didn’t give credit where credit is due, and I have to say, Speaker Boehner actually got a lot of things right when he chased me out of his home with a baseball bat.

Regardless of your political party, I urge you to consider the facts. I invaded HIS space, no doubt about it. He discovered me in his heavily guarded private residence, without his permission, in the dead of night. Not only was threatening me with the Louisville Slugger he stashes beneath his bed understandable, it was the right thing to do. Period.

I’ll go so far as to say that even the way Boehner screamed “Who the hell are you? What the fuck are you doing in my home?” was on the nose. Because you’ve got to remember: He DIDN’T know who I was, and he DIDN’T know why I was there. To him, I was simply a strange man who appeared inside his bedroom at 3 a.m. with unclear motives. His reaction was spot-on. And I commend him for it.

I’ll go so far as to say that even the way Boehner screamed “Who the hell are you? What the fuck are you doing in my home?” was on the nose.

Of course, there will be those who argue Boehner was wrong to resort to violence, but they don’t understand how the first thing he and his wife saw after waking to the sound of an overturned reading lamp was me standing above them, frozen, mere inches away. It was a startling sight, and I had it coming. I agree with him on this issue 100 percent.

At this point, I should make one thing perfectly clear: In no way does this mean I condone his brinksmanship-style politics that shut down the government last year. But when I made a sudden move to grab the bat as we circled one another, he acted swiftly and fairly by repeatedly bludgeoning me with his bat until I retreated to the foyer. I respect that, no matter what his party affiliation.

Now, I’m sure I’ll receive backlash for publicly agreeing with a man who has himself thrown bipartisanship to the wind, but at the end of the day I’ve got to hand it to the Speaker of the House for standing his ground and inflicting pain until I stumbled into the night. It was the correct course of action, and I’ve got no problem putting that in print. Only time will tell if his peers in Congress will show the same good judgment.