When This Man Lost His Job, He Didn’t Know What To Do—3 Years Later, He Co-Owns A Dinner Jacket 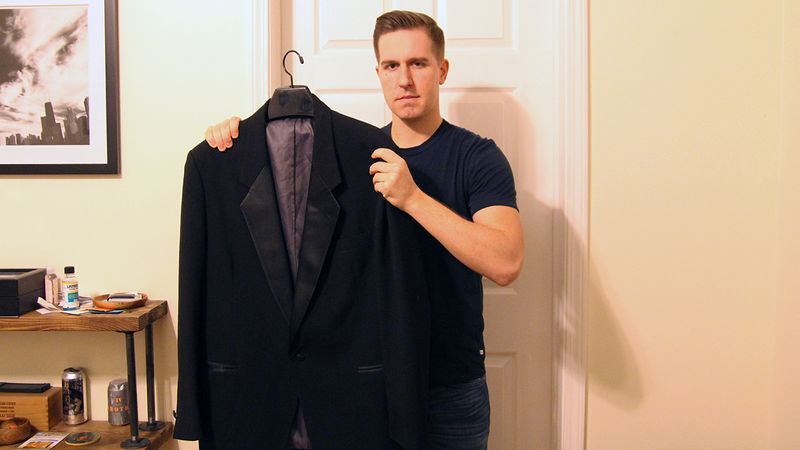 Now this is a true underdog story.

When Doug Haverford was laid off from his job as a warehouse foreman, he didn’t know where to turn for help. He had no college degree, no job prospects, and no savings to fall back on. But even through the toughest of times, Doug never lost hope that things might get better someday. Now just three years later, his luck has finally turned around: Doug is the proud co-owner of a dinner jacket!

Inspiring! Doug just proved that a little perseverance can go a long way.

For some time, Doug worked whatever odd jobs he could find to support his family, was nearly evicted from his house for not paying rent, and even had to sell his pickup truck to make ends meet. The husband and father of two had hit rock bottom, but in retrospect it only made his climb to the dizzying summit of dinner jacket co-ownership all the more amazing. One day, an old acquaintance looked him up in the phonebook, called his house, and asked him to go fifty-fifty on a navy blue polyester dinner jacket!

In Doug’s darkest days, he worried that he might not even be able to put food on the table for his wife and children. Now here he stands, in charge of half of this fine piece of menswear custom-tailored precisely to the average of his and his jacket partner’s dimensions. He may still be out of a job, but he will always know that access to a quality dinner jacket is just a phone call and a 60-mile drive away.

“These past few years have been some of the hardest of my life, but I never lost faith,” recalled Doug as he ironed the left lapel of the jacket—the lapel he is responsible for keeping freshly pressed. “It’s still hard to believe that a jacket like this belongs to me every single Monday, Wednesday, Friday, and alternating Sunday.”

Asked what he wished he could say to his former self, Doug paused for a moment. He pulled out his half of a white silk pocket square and tucked it neatly into the front of the coat.

“I thought losing my job would be the worst thing that ever happened to me,” he eventually said, while removing one cufflink from a drawer and debating which sleeve to put it on. “But I never could have imagined that just three years later, I’d be part owner of a dinner jacket that I can wear to any fancy event, so long as I put the request in writing three weeks ahead of time and swap out one of my holidays.”

Doug’s resilience serves as an important lesson to us all: No matter how bad things get, just keep fighting, because tomorrow might be the day you end up sharing custody of an elegant, business-casual dinner jacket. Way to go, Doug!