White House In Chaos: The Chilean Foreign Minister Had To Wait In The Hallway For 3 Hours While Reince Priebus And Steve Bannon Argued About Who Gets To Wear Their One Belt 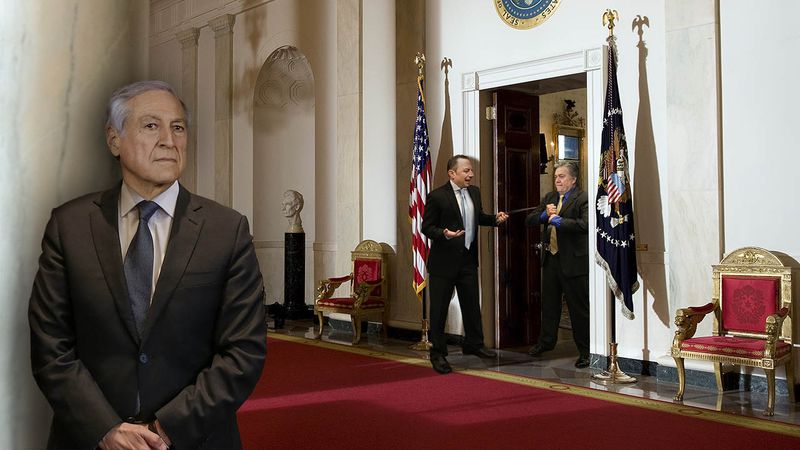 Every new administration is bound to have a few missteps as it adjusts to day-to-day White House operations, but lately it appears as though President Donald Trump’s problems are only going to keep spiraling further out of control, especially in light of the major blunder that occurred yesterday afternoon: The Chilean foreign minister had to wait in a hallway for three hours while Reince Priebus and Steve Bannon argued about who gets to wear the single belt they share.

Um, yeah. This does not bode well for our country’s international relations.

Although the meeting with Chilean Foreign Minister Heraldo Muñoz had been scheduled weeks in advance, Trump’s chief of staff and chief strategist demonstrated a serious lack of organization during their tense, afternoon-spanning debate over who needed the belt more. Mr. Muñoz waited patiently by himself outside a conference room where Mr. Bannon was whispering to Mr. Priebus through gritted teeth that without the belt his pants would fall down, while Mr. Priebus remained unshakable, alleging that Bannon knew the rules and it was before sundown, meaning it was the chief of staff’s right to the belt.

Instead of engaging the Chilean representative in high-level talks on terrorism prevention in the Americas, the two staffers held a brief test to see if either’s pants were tight enough to stay up without a belt, which involved both of them letting go of their pants and raising their arms in the air. After both Mr. Bannon’s and Mr. Priebus’ slacks fell down immediately, they, with red faces, poked their heads into the hallway to see if Minister Muñoz—who was busy checking email on his phone to pass the time—had seen either of their pants fall down.

Bannon and Priebus even sent an aid to ask the waiting foreign minister if “an unnamed individual could borrow his belt until the meeting was over,” demonstrating a level of chaos never before observed in White House procedure.

One would hope that two people working in such high government posts could devise a solution together, but Mr. Bannon and Mr. Priebus’ struggle over the belt proved that infighting is standard operation in the Trump administration. After failed attempts to fit the belt around both of their waists, improvising a second belt out of paper clips, and trying to rapidly gain weight by eating an entire tray of peppermint candies so their pants would fit without belts, Bannon insisted that Priebus “lay down on the couch for the whole meeting while [Mr. Bannon wears] the belt.” Mr. Priebus refused, alternatively demanding that he get the belt and covertly hold up Mr. Bannon’s pants from behind when they shake hands with the Chilean foreign minister.

Meanwhile, Minister Muñoz, waiting in the hallway without a chair or water, checked his watch and sighed, unaware that this delay would last two and a half more hours.

Mr. Bannon and Mr. Priebus nearly came to an agreement, with Priebus conceding the belt to Bannon in exchange for the chief strategist’s shirt to stuff in his pants so they’d stay up without a belt. But just as they were about to fetch the ambassador to begin their meeting, President Trump himself stormed into the room, snatched the belt, looped it around his pants despite having a belt on already, stormed back into the Oval Office, and fell asleep on his couch.

By the time Mr. Bannon and Mr. Priebus had enacted their solution of painting pants onto their bare legs using ink from broken White House gift shop pens, Mr. Muñoz had left, all but guaranteeing that we can expect more finger-pointing and even less effective governance out of Trump’s office. It would be a miracle if this belt incident didn’t harm U.S. relations with the crucial South American ally.

Welp. Hopefully their method of running the country is better than the one they use to keep their pants up.

If Trump intends on having a successful presidency, he needs to iron these kinks out—and yesterday. Logistical problems like these are pretty revealing about just how much Trump’s team needs to get on the same page about who can wear the belt and when so they can focus on real issues. Two executive staff members fighting over their one belt isn’t what Trump promised voters, and it’s definitely not what’s going to fix our country’s problems.