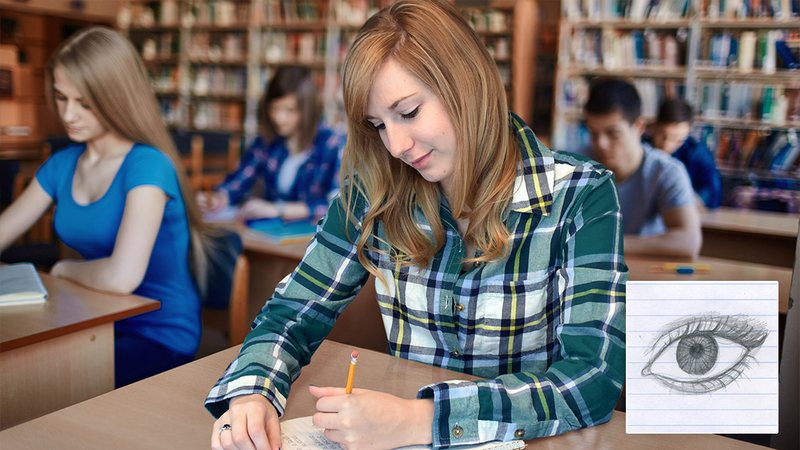 Everyone already knows that Morgan is essentially the most perfect person at Alton B. Parker High School, but just when we thought she couldn’t get any more talented, Morgan’s gone and blown us all away yet again. This morning, Morgan doodled a totally realistic-looking eye in the margin of her history notes.

Um, of course she did. Is there anything Morgan can’t do well?

The eye, which Morgan drew during Ms. Cho’s second-period class, looks completely life-like, down to the individual eyelashes that Morgan put around the upper and lower eyelids and the jagged lines she used to fill in the iris. Morgan drew a second line under the eye, to make it look like it really belonged on a face, and even thought to put a small reflection close to the pupil. Judging from how good the eye looks, it’s safe to say Morgan could probably draw a whole realistic-looking face, even the nose, which is the hardest part. And then she also flawlessly answered a question on the French Revolution when Ms. Cho tried to catch her not paying attention, because of course she did that.

She’s so amazing. We wish we could draw anything as well as Morgan draws eyes!

What makes Morgan’s drawing even more impressive is the fact that she did the entire thing in pen, and didn’t even mess up once. We didn’t even know that art was her thing, but the eye she drew looks better than any of the fruit drawings the AP art class put in the display case by the announcement board. And the fact that this eye is just on the side of her notes shows that she probably didn’t even try that hard to draw it, even though it looks like it could be on a movie poster.

Ugh, how is Morgan so flawless?

We’ll probably see Chloe M. and Stephanie start doodling their eyes like this in the coming weeks, but let the record reflect that Morgan drew an eye like this first, and of course, it was absolutely perfect, like everything she does.