Whoa! The Custodian Is On The Roof 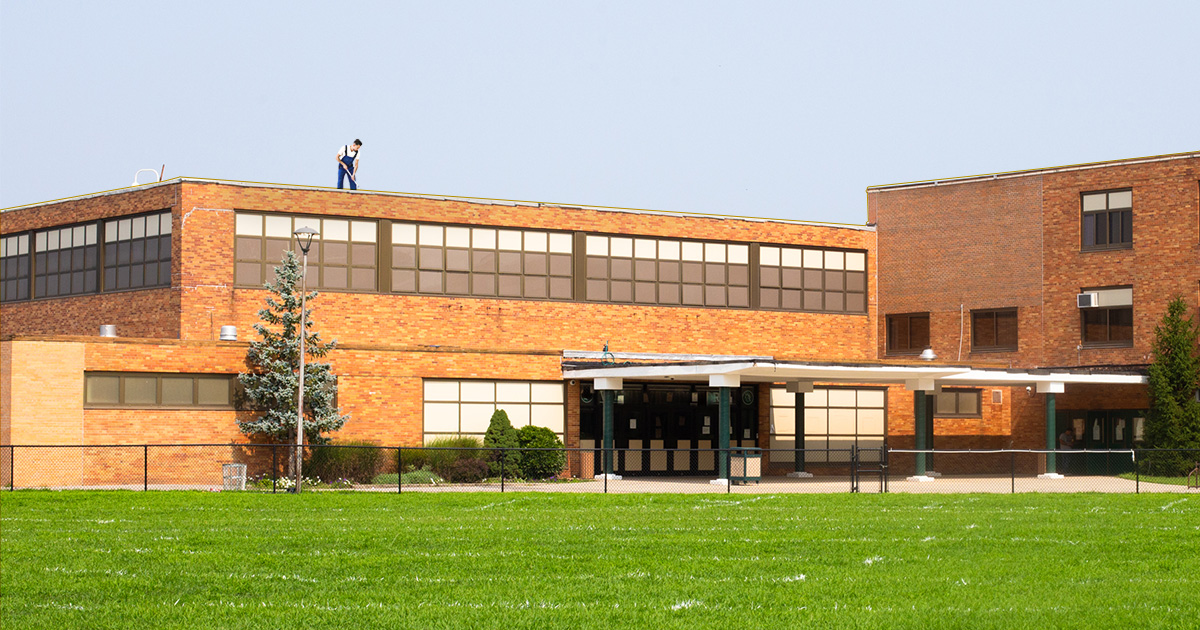 Well, here’s a fascinating development that’ll surely keep you on the edge of your seat with excitement and wonder: The custodian is up on the roof!

Whoa! Wonder what he’s doing up there?

According to multiple sources at Platteville Middle School, the staff custodian first appeared on the roof just a few minutes ago, creating a thrilling spectacle for students, who are easily enthralled by literally any distraction from their learning. Students all across the school have crowded around classroom windows to catch a glimpse of the custodian—whose name no one has taken the initiative to learn—walking around the roof on the adjacent wing of the building and to speculate as to why he might be up there, as it is a highly unusual occurrence considering there aren’t any toilets up there for him to clean or anything.

One theory, proposed by 7th grader Micah Rosewood, is that there could be a nest of raccoons up in the school chimney and the custodian has been tasked with drowning them all, which seems plausible since he appears to be carrying a bucket and some sort of pole. There are also whispers that the custodian might have found the body of the weird kid who suddenly stopped showing up to school in 2018, although 8th grader Theresa Dunning has cast doubt on this theory, as she remembers hearing that the weird kid just moved to Green Bay and is still alive.

Whatever the real story behind the custodian being on the roof is, it’s gotta be a doozy, because custodians almost never go on the roof. More and more students seem to be growing convinced that the custodian is going to jump off the roof and commit suicide, an outcome that 13-year-old Evan Carter-Jones believes is highly likely, saying, “I would kill myself too if I cleaned up kids’ barf for a living.” However, numerous teachers have insisted that there’s nothing remarkable about the custodian being up there and have urged students to focus on their schoolwork instead, although it is obviously unreasonable to expect kids to ignore such an exhilarating scene.

Yep, the custodian being up on the roof means today is anything but a normal day.

It’s possible we’ll never have an answer as to what the custodian is doing up on the roof, but hopes remain high among the student body that it’s not just something boring like patching a hole where water’s leaking through or whatever. Ultimately, it seems like this one might remain a big question mark in the lore of Platteville Middle School, along with why Mrs. Harrison got fired and who carved the pair of boobs into the handicapped bathroom stall door. But for now, the custodian is still on the roof, and that’s pretty goddamn incredible.