Wisdom Of The Ages: Richard Nixon’s Ghost Has Appeared To Donald Trump To Guide Him Through Getting Crumbs Out Of His Jowls 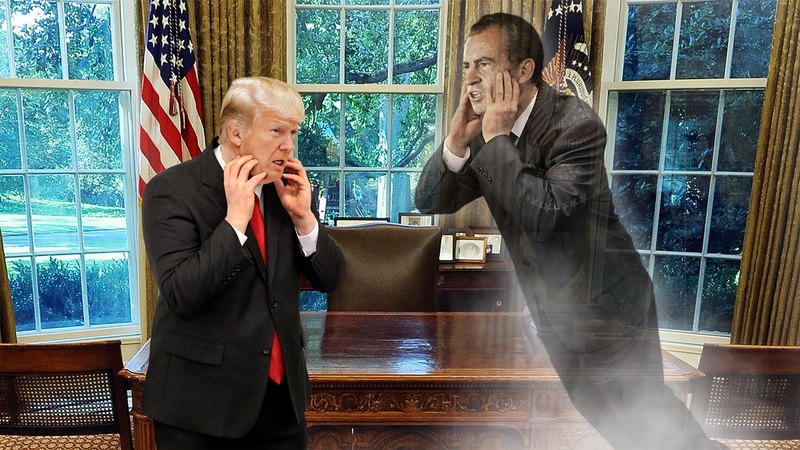 The president of the United States may be the most powerful person in the country, but even the chief executive needs a lot of guidance to navigate an endlessly complex job. Between his massive scandals and inability to get his policies passed, President Trump is especially in need of advice, and luckily he just got some from someone who understands the pressures of the office: Richard Nixon’s ghost just appeared to Donald Trump to guide him through getting the crumbs out of his jowls.

The president was in the Oval Office yesterday afternoon, still struggling to extract loose bits of breakfast that had become lodged in the pendulous, drooping flesh along his jawline, when the ghost of President Nixon appeared to provide much-needed pointers from his time as commander in chief. The apparition of the 37th president advised Trump to reconsider his current jowl-cleaning method, which involves an aide waving an ornate Japanese fan at a broom rigged to the ceiling with a wire so that the broom knocks into Trump’s face and jostles old food loose from his flesh creases. This method takes Trump up to three hours a day, which Nixon wisely pointed out was much too long, as the ideal jowl-sanitation session should only take 25 minutes at most.

The flickering Nixon phantom then launched into some best practices that he had learned from sometimes catastrophic jowl-cleaning disasters during his administration.

“Never ask a foreign head of state to dig lunch meat bits out of your jowl folds,” Nixon’s floating form advised Trump. “I asked Mao Zedong to fish out some crusted-over salami during my historic diplomatic trip to China, and he got it all out but then refused to give it back to me. I had to promise China a 30-year trade surplus with the U.S. just to get my salami back.”

“Also, don’t ever use a leaf blower from the ’70s to blast the Cheez-It crumbs out of your skin folds,” the Nixon specter continued. “I don’t know where leaf blower technology is at now, but that’s how I died.”

During their meeting, Trump ate his usual lunch of chicken skins, coleslaw, and a pound of Turkish delight, and seemed truly grateful when Nixon showed him how wrapping your entire face in Saran Wrap then cutting a little mouth hole is a great way to ensure that foodstuff never even gets trapped in your jowls to begin with.

After 40 minutes advising President Trump how to keep his jowls clean of food so they don’t get infected again, the ghost of Nixon vanished as quickly as it had appeared. There’s no doubt that Trump is very grateful that he was visited by the right guy to help him look a little more presidential. In the future, hopefully when the world sees Trump’s neck, there will be less shit crammed up in there, and that’s something every American can get behind.