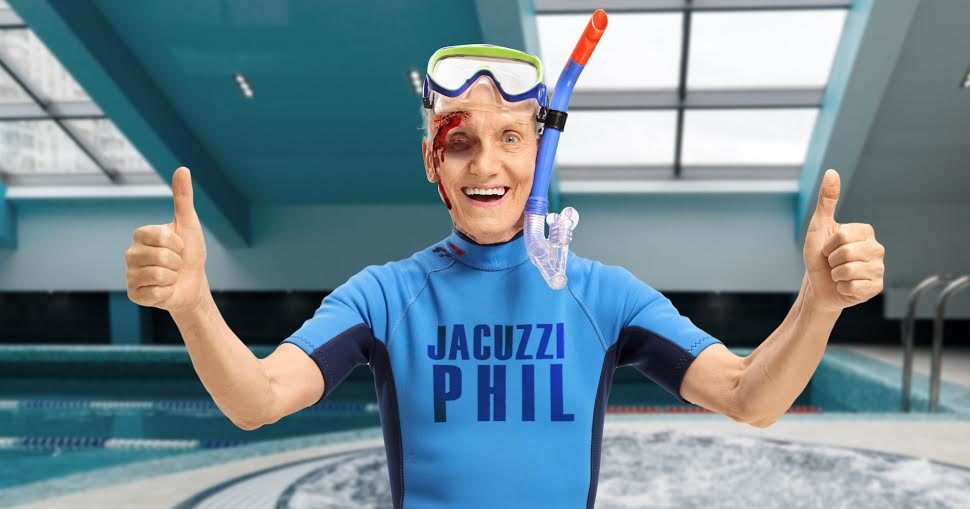 Jacuzzi Phil is everyone’s favorite party time hot tub guy. He stinks of everything fun in the sun, but somewhere along the line his gift became a curse. Jacuzzi Phil has been diving headfirst into jacuzzis for decades and his head has paid the price. Everyone loves him so much, but if he keeps recklessly pile-driving into shallow pools of water, sooner or later he’s going to get himself killed.

There were endless possibilities during the hotel pool boom of the early 1990s. People were doing a lot of exciting, innovative stuff in hot tubs, but no one was doing it better than Jacuzzi Phil. However, his diving career nearly came to an end at a Holiday Inn 30 years ago. As dozens of young movers and shakers partied around the hotel’s indoor pool, sipping screwdrivers and making sexually inappropriate jokes, Jacuzzi Phil suddenly burst into the room, kicked off his penny loafers, and shouted out his famous catchphrase, “I am doing it again!” to which the adoring crowd, as always, responded, “He’s hot for tubbin’!” But then things turned scary.

Jacuzzi Phil dove, noggin first, right into the hot tub. It took a few moments for the roar of applause to die down before everyone noticed his body floating face down, a noticeable dent in the back of his skull. Witnesses said his head looked like a soda can dropped against the edge of a table. He was rushed to a local hospital where he underwent emergency surgery to repair seven different skull fractures. The doctors said had he not been incorrectly wearing his scuba mask on the top of his forehead, thus absorbing much of the impact, he would’ve died.

For many years after the Holiday Inn incident, Jacuzzi Phil continued diving head first into hot tubs all over the United States and Eastern Europe without incident. But this all changed one hot July evening at the Cha Cha Cabana Club (next to the Sunset Lagoon) in Miami. That night, Jacuzzi Phil stepped out onto the balcony overlooking the palm tree-shaped pool and shouted “I am doing it again!” to a crowd of cheering onlookers, to which they dutifully replied “He’s hot for tubbin’!” while hooting and hollering and slapping their thighs. Then Jacuzzi Phil jumped down into the hot tub, and moments later a collective gasp of horror went through the crowd as a pool of dark blood began to form around their hero’s limp neck. A bone fragment had been lodged in his frontal lobe and the resulting dysarthria would have been permanent if not for the dedicated doctors and speech therapists at Miami Presbyterian Hospital. Still, Jacuzzi Phil was unfazed.

Jacuzzi Phil was 33 and in his prime, diving head first into hot tubs for smiling crowds of vacationing families over 200 nights a year. Yet the endless pool parties came to a halt one day at Tortoise Gulch, an indoor water park themed around turtles, when Jacuzzi Phil ascended a ladder he borrowed from a utility closet, shouted “I am doing it again!” to a raucous reply of “He’s hot for tubbin’!” and dove towards the hot tub at an awkward angle, landing with a sickening thud that echoed throughout the hushed crowd and was followed shortly thereafter by the eerie moan of his bowels voiding.

Jacuzzi Phil crushed his parietal lobe, causing heavy edema. The doctors had to put him into an induced coma for four months while they waited for the pressure and fluid to drain. His spleen was also removed, although this procedure was elective.

Though jacuzzi culture waned in popularity in the new millennium, Jacuzzi Phil never gave up on his passion. He continued diving into hot tubs, though no longer for crowds of cheering onlookers, as the internet and its myriad thrills had largely rendered jacuzzi-based entertainment obsolete in the eyes of the American public.

One August morning in 2011, he plummeted head first into the jacuzzi at the Red Roof Inn he’d been living at for about a year. When he arrived at the hospital, they discovered his emergency contact was the Red Roof Inn’s front desk receptionist. Phil suffered multiple contusions and fractures and practically split his vertebrae in two. After 13 months of observation (it would’ve only been two months had he not botched a dive into a hospital therapy pool during recovery), Phil left the ICU with dementia pugilistica.

In an ambitious effort to generate some buzz and attract a new generation of fans to the sport of hot tub diving, Jacuzzi Phil staged a death-defying, fanfare-filled dive from a 50-foot platform into a small hot tub he’d erected on the plaza of the 9/11 Memorial & Museum, marketing the stunt as “an artistic interpretation of the famous antics of the 9/11 Falling Man.” As always, he preceded his jump by shouting “I am doing it again!” but only a few onlookers knew to shout “He’s hot for tubbin’!” in response. Then he jumped, at which point the spectacle took a grotesque turn.

Jacuzzi Phil crushed his frontal lobe and nasal cavity. Then he got up, broken head and all, and took a bow before collapsing into the nearby reflecting pool, at which point security arrived to escort his limp, unconscious body from the premises. In the weeks that followed, specialists would remove significant portions of tissue near the brainstem. One of his doctors said his brain scan looked like a decomposing rat.

Jacuzzi Phil has not yet recovered enough from his injuries to start diving again, and friends and family are hoping that this most recent life-threatening accident will be what finally convinces him to retire. But in reality, asking Jacuzzi Phil to stop diving into jacuzzis would be like asking Tony the Tiger to stop yelling about Frosted Flakes—it’s his entire identity, and if you take that away, then he has nothing. Still, considering that he can’t even shout his famous catchphrase now without slurring his words due to the multiple compressive cranial neuropathies he’s suffered, it’s clear that things aren’t going to get any better for him. We just pray that he finally comes to his senses and calls it quits soon, otherwise we fear it’s only a matter of time before he dives himself into an early grave.