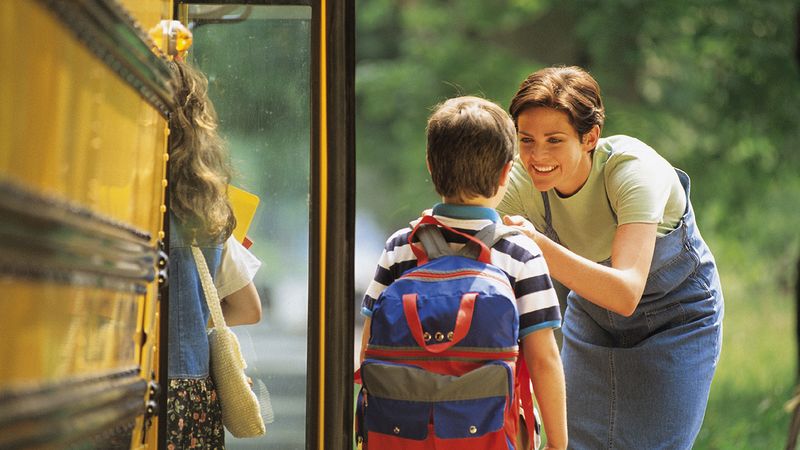 Are you going a little overboard with your children? These are the telltale signs that you are a helicopter parent.

1. You are linked to your child with a chain of invulnerable metal

Kids need to have some independence, but instead you’re connected at the waist with an ancient chain forged in a forgotten age. It is stronger than steel, brighter than silver, and the secret of its smithing has been lost to the mists of time. No blade can sunder the chain’s mighty rings, which doesn’t give your child the room they need to grow as an individual.

2. You are all of your child’s schoolteachers

It’s natural to want your child to do well in school, but don’t get a job as every single one of their teachers so you can give them A-pluses across the board. Here’s an easy litmus test: If you find yourself constantly changing wigs and latex masks so you can assume the identity of a different educator every school period, then you’re going too far.

3. You spray-painted your kid’s name over all the billboards in Times Square

You should be proud of your kids, but there’s a fine line between being a supportive parent and being obnoxious. People get annoyed when parents won’t shut up about their child’s accomplishments and spray-paint their name on every sign in New York’s iconic theater district.

4. All the other science fair entrants are imprisoned in your basement

Your kids will never learn the value of hard work if you capture their science fair competitors and chain them up in your basement until the competition is over! Getting the blue ribbon isn’t what’s important. What matters is building a strong work ethic.

5. When your kid throws a temper tantrum and demands to drive an ambulance, you let them

Part of being a good parent is learning when to say no.

6. You’re so worried about germs that you won’t let your children play with rusty axes

A beloved part of childhood is playing with that old ax you found embedded in a tree stump in the woods, but your kids are going to miss out on it. You can’t be a germaphobe and keep them isolated from the world. Let your kids play; let them swing that decaying, rust-covered ax. If they catch a cold or tetanus, well, children have resilient immune systems, and they’ll get better before long.

Let kids be kids and sleep at night. You’re not doing them any favors by forcing them to stay awake forever, drilling with tutors from dusk until dawn in a never-ending nightmare delirium.

8. Your child never loses at games, and it’s starting to make you nervous

When your kid is playing games, you insist on acting as referee and making sure they win—even if they don’t deserve to. What’s worse, you’re not sure it’s just your rule-bending that’s giving them an advantage. Probability seems to warp around your child. You once watched them flip a coin and get heads 100 times in a row, and another time draw nothing but aces from a deck of cards. Fifty-two aces and no other cards, even though the deck was normal when you shuffled it. Anyone who scolds your child gets a heart attack and dies, no matter how healthy they are. This is a classic parenting mistake.

9. You combined your children into the perfect child

When you have more than one kid, it’s hard not to play favorites and steal their body parts to stitch together the ultimate child. Don’t! This is a telltale sign that you’re a helicopter parent. Accept your children for who they are instead of trying to mold them into an ideal flesh-golem.

10. When your kids grow up and have their own children, you want to spend time with your grandchildren

Let your children live their own lives, and don’t insist on trying to help them raise your grandkids. The last thing they need is you offering to babysit, or showing up to family dinner during the holidays. Just go away, never speak to your children, and be alone forever, like a sane parent.